Most of this retrospective will be taken verbatim from my initial post on May 1, 2014. And of course, any new thoughts will be bold and italicized. 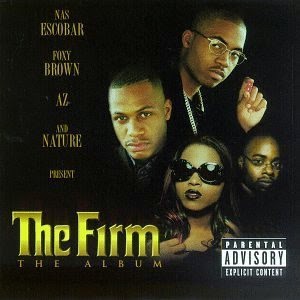 
Most of us remember hearing "Affirmative Action" off of Nas' excellent "It Was Written" album, featuring the original Firm lineup that consisted of Nas, AZ, Foxy Brown and Cormega. I remember playing that song often in the summer of '96, so it should come as no surprise that my anticipation for the group album exploded, figuratively of course, lol.


When you looked at the original members' credentials, as well as production from the legendary Dr. Dre and the Trackmasters, this seemed like a can't miss project. As 1996 turned into 1997, there was a change in the lineup, as Cormega departed from the group, mainly due to creative differences in my opinion (and I'm sure Mega didn't shed any tears either), and a largely unproven but decent MC in the form of Nature took his place. I had heard a few freestyles from Nature in '97, and for the most part they were good, but I wasn't sure about his spot in The Firm, until I heard "La Familia," a dope B-side on Foxy Brown's "I'll Be" single. This song was in slight heavy rotation for a minute, and it only built up my anticipation even more. Now, hearing the album's lead single, "Firm Biz," for the first time would've turned the average fan away from this album, but for some obvious reason it worked at the time. (I think I'll have a little more to say about this song as we proceed.)


Tuesday, October 28th, 1997 was the day of its release and I was excited. I went to my local Target in Colonial Heights, VA, and I was a little disappointed to see that the associates on the floor did not put any of the CDs on display, and this was around 6:00pm mind you. I had to ask one of them "did you get the new Firm album today," and that's when I got my copy, paying $13.99 ($14.62 with tax) for the album (yes, I remember EVERYTHING, lol). Listening to the album later that night, well, I thought it was one of the best things I'd ever heard honestly, but with hindsight being 20/20 and all, will this still be the case? We shall see. (Actually, this album was in slight heavy rotation for a few weeks before Killarmy's "Silent Weapons For Quiet Wars" took its place.)

1. Intro (nothing noteworthy here)
This intro was straight out of a gangster movie, almost giving it the vibe that it's going to be a concept album.

Kind of an ironic song title isn't it? This song got the album to an ok start. Dre's beat was very good, lyrically it's nothing special. The gangstafied lyrics, drawing a direct influence from the Henry Hill character in the classic movie "Goodfellas," were ok, but again nothing special. In retrospect, it's kind of silly for all involved to be proclaiming this undying loyalty to one another, considering how things ended up for the group. Not that there's anything wrong with that, but it's only a super group bonded by the music, not blood, which is really stating the obvious.

3. Phone Tap (Intro)
Well, this album was heavily influenced by the "gangsta/mafia" theme, and I'll touch on that more later. Nas is receiving a phone call as he hops into his ride, leading us into.....

Nas, AZ, and Nature blessed this tight Dre track and it's the best song on the album; video was nice too. The song is also creative with its theme, that being Nas, AZ and Nature all "on the phone" with each other, talking about their current situations, all the while being very aware that their "phones are tapped."

5. Executive Decision
Nas, AZ and Nature
Produced By: The Track Masters and Curt Gowdy
This almost sounded like it could've been on either Nas' "It Was Written" or AZ's "Pieces of a Man." Decent Trackmasters beat, lyrically it's nothing special, again, plus the hook left a lot to be desired too. When I had this on heavy rotation in late '97, I used to bump this one constantly.

I like the beat on this one. A Dre feature was a rare thing at this point, and I don't think he disappointed on this one; Nature did good also. The hook, again, left a lot to be desired.(I was a little hard on the hook, it's decent all things considered. I also feel Nature and Dre had some good chemistry here.)

Oh God, totally forgettable here. And again, I gotta attack the hook, lol. This is it, from Nas I might add, singing too:

"We are the Firm all stars/Fuckin' yo bitch, we don't care who you are"

8. Fuck Somebody Else Intro
This was dumb, even for a "sex skit." Foxy and some guy are in the midst of a session, but the guy climaxes too early for Foxy's liking. This did not sit well with her, so she proceeds to "please herself," much to the guy's humiliation.


9. Fuck Somebody Else
Foxy Brown
Produced By: Dr. Dre and Glove

Another forgettable track here and remaking The Jones Girls' "You Gonna Make Me Love Somebody Else" was NOT needed for this typical, borderline sexist song. The only positive thing I have to say about it is that the beat is dope. Considering the type of songs we get today on a similar subject, this sounds even worse in comparison.

*1 out of 5*
10. Hardcore
Nas and Foxy Brown
Produced By: The Track Masters

Why oh why did they have to sample ANOTHER classic, this time Cheryl Lynn's "(Your Love) Encore." NOTHING special. I RARELY say this about a song with Nas on it, but lyrically this song is NOTHING to write home about.

SHORT song here, featuring Wizard, of the not yet named Bravehearts. Backed by a tight Dre beat, this would've gave you the impression that Wizard was next in line.

12. Five Minutes To Flush Intro
There was nothing funnier than listening to AZ talk with a puesdo gangster accent.

This was a rather pointless intro/skit.

Nature did well on this Dre track, which creatively sampled Whodini's "Five Minutes of Funk." (Nature did shine here, probably delivering the best storytelling of his career. The story is easy to follow and understand. Also, the hook performed by the late Roger Troutman and Talk Box was a nice touch.)

15. Desperados
AZ, Nature, and Canibus
Produced By: The Track Masters and Curt Gowdy

Dope track, featuring a complete show stealing verse by Canibus. AZ and Nature did their thing also over this good Trackmasters beat. Second best song on the album easily.

SMH, they jacked ANOTHER classic, THIS time in the form of Teena Marie's "Square Biz," for this blatant attempt at commercial success, and it didn't work at all. Nuff said.


Well, as a first single, I can see why they chose this, but that still doesn't mean it was a good selection. This song was simply not good, and the accompanying video was somehow worse. And what was "firm biz" supposed to be anyway?

*1 out of 5*
17. I'm Leaving
Nature and Noreaga
Produced By: The Track Masters

Good chemistry displayed by Nature and Noreaga on this one. Very good song.

AZ and the late Half A Mil closed this album a little better than how it began. (Well, this was a dope closer, probably not better than "Firm Fiasco.")

Why I feel it's forgotten

[My thoughts here will not focus on why I feel it's forgotten, but I'll tie these words into my views on the album today.]

1) It was TOO overhyped.

This was the first major issue as to why this album failed. "Classic," "greatest album of all time", etc were all thrown around in reference to this album and NONE applied then and now. The hype was all over the place in '97, but in the end, that hurt the album more than it helped.

2) Nas, AZ, Nature & Foxy Brown really tried to come off as gangsters on this album, and to say it failed miserably would be an understatement. The gangster trend was a heavy influence also, even down to the album cover (borrowing from my 6th favorite movie of all time, "Casino"). That affected this album also.

If this was their idea of a concept album, it was not a well executed one. Had this album been normal, but separate and different from everything that was out at the time, it would've been much better. They didn't need the heavy mafia/gangster influence. Granted, Nas was able to pull this off with "It Was Written," but it was clear that a different direction was needed at this point.

3. It wasn't that good overall.

With hindsight being 20/20, this was good, but not great. It could've been SO much better.


4. Cormega not being part of the lineup (that probably wouldn't made much of a difference either).

Looking back, Cormega remaining on board would've helped this album a bit more than we may think. Nature did well throughout, but he was relatively unproven in '97, so people expecting something along the lines of "Affirmative Action" were likely disappointed with this development. And now when I think about it, even on an album with the likes of Nas and AZ, Nature seemed to be trying the hardest of all involved, possibly eyeing a solo album after the fact, and he did a very good job with his contributions on this album.

5. The production from Dr. Dre and Trackmasters not living up to expectations, much like this album.

Wow, did I really say "not living up to expectations" as far as the production goes? I'd have to backtrack on that. The production here is nice overall, especially the contributions from Dr. Dre. The album was also mixed and mastered very well, and that comes across more clearer today than it did in '97, respectively.

I remember they were on an episode of Rap City promoting the album in '97. Foxy Brown mentioned, and this is a direct quote, "after this album, you're going to see 10 more Firm albums." SMH, yeah right. A sequel was NEVER hinted at, for obvious reasons, and no one even mentions this album these days. (I said this one well. After the reception the first album received, a sequel was totally out of the question. I wonder what all involved would have to say about this album 17 years later.)

Rating: I'll give this 2.5 stars, which is VERY generous, and that's mostly because of "Phone Tap" and "Desperados." (Based on everything except "Firm Biz," "Fuck Somebody Else," "Firm All Stars," and "Hardcore," the material surrounding those mishaps is largely very good, necessitating a surprised increase from that initial 2.5 star rating to a solid 3 stars. I thought about a 3.5, but 3 stars sounds about fair. Had "La Familia" replaced those four aforementioned songs, this may have been a 4 star affair. Recommendation? If you've never heard it before, yes. Otherwise, I'd say don't bother, as all 4 artists have MUCH better material worth your time.)