Looking back at mid-1997, I remember the first ever Boot Camp Clik album being heavily anticipated. After TIGHT releases from Black Moon, Smif N Wessun, Heltah Skeltah and O.G.C. between '93 and '96 respectively, all eyes were on "For The People" and much like the Wu-Tang Clan, when you get all the members together backed by some quality production, the results tend to be dope. The classic "Headz Are Reddee Pt. II" was the album's lead single and trust me, I'll have more to say about that later. In addition to Buckshot, Tek, Steele, Ruck, Rock, Starang Wondah, Top Dog and Louieville Sluggah, again much like the Wu, the BCC's extended family comes along for this Duck Down ride in the form of The Reps (aka The Representativez), B.T.J.'s, Swan & Boogie Brown, F.L.O.W. and ILLa Noyz. And before I get to the album, allow me to tell a story, and with this being '97, you know I have one. On June 28th, a few days after my 13th birthday, I bought Wu-Tang's "Wu-Tang Forever" and Camp Lo's "Uptown Saturday Night" from a local spot, "Crockett's Records, Tapes, & CDs." I was VERY close to picking this BCC album over Camp Lo, but in the end Camp Lo's album was my pick (I would cop "For The People" years later). Ah, the memories. Now loyal reader, let's dive right into the BCC's debut album! 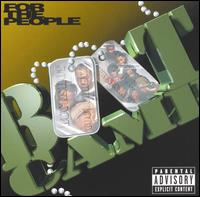 1. "1-900 Get Da Boot"
This intro, along with the other interludes on the album, were taken from actual phone calls they received on this internal, 1-900 phone line, a rather cool thing to do. I didn't find this out until years after the fact. This takes us right into.....

A true throwback vibe sets things off, with the crew flowing to an instrumental of Fab 5 Freddy's song of the same name. Clocking in at 2:52, this was very good (not sure why Louieville was MIA for this one).
*4 out of 5*

From the jump, this joint sounds MUCH different than anything from the crew to this point. This may have been one of the first times that live instrumentation was used on a Duck Down/BCC album. Buck, Tek and Steele bring their usual here over some production that's tailor made for the "night prowl."
*3.5 out of 5*

Man, THIS classic. I think it's safe to say that it is the best song on the album and it's better than its predecessor, which is also a classic. When you get all 8 members on the same track, especially when said track is dope, this is the result and I've always liked this song A LOT; and of course I gotta include the awesome, Rocky inspired video for this one, which shows all involved inspired and simply having the time of their lives. And thinking back to '97, I'll always remember my homie Marcellous having me tripping out when he would repeat Steele's actions from the video when he begins his verse (check out the video, you'll see what I'm referring to). GREAT stuff here.
*5 out of 5*

This was more of a showcase for the Repz while Louieville and Rock played the hook. Good song. The song title here tells you all you need to know.
*3 out of 5*

"This sounds ill like noise in Brownsville," no question. Rock and Ruck comes through over some decent Shawn J. production for this showcase of ILLa Noyz.
*4 out of 5*

I appreciated the efforts of them wanting to try a new sound of sorts, but the slow paced production here does not fit them. Not one of their best moments here.
*2 out of 5*

I guess this one was for the smokers, but I don't even think they would care too much for this one. It's ok, nothing more.
*2.5 out of 5*

Naw, these cats won't fall for anything, obviously. I'm not sure what was in the audio water, but MS, Starang and Tek were feeling it here.
*4 out of 5*

The reggae vibe brought to the table here was very good. Top Dog contributed his usual on this Twanie Ranks showcase.
*3.5 out of 5*

I'm not sure what Louieville was going for here but it wasn't too inspiring. He had his moments here and there, but listening to this, it's clear he was best when alongside Starang and Top Dog. Think about this for a second: Louieville was the only (original) member to get a solo showcase on this album.
*2 out of 5*

Another showcase here, this time in the form of the B.T.J.'s. They handled Shawn J.'s production good enough, but overall these cats weren't that impressive. They tried, I'll give them that.
*2.5 out of 5*

This was listed as a "bonus track" even though it's slotted at #13. The title would suggest a reggae influence, but we really didn't get that. It's not good or bad, but all things considered, this should've been much better than what we got.
*2 out of 5*

An introspective tone, which was welcomed, ensured that this album wouldn't close on an anti-climatic note.
*3.5 out of 5*

Ok, let's start with the good things about this album, and unfortunately there aren't many. As mentioned, "Headz Are Reddee Pt.II" is clearly the album's best song and everything else, while good in few spots, paled in comparison. It was also commendable that the crew gave some shine to the extended members, but outside of ILLa Noyz and to a smaller extent The Repz, the rest weren't all that impressive in my view. Now, this portion, I'll just refer to it as the "disappointing" instead of the bad, with all due respect and I'll start with the production. Long time heads will notice that Da Beatminerz specifically and other well respected names that brought the memorable sound to the members' debut albums were absent here, with the exception of Shawn J. Period. That was a HUGE mistake and it REALLY affected the overall sound of this album. Again, there's nothing wrong with wanting to try a new sound, but these men were best over the ruff and rugged, boom bap styled production that drove their debuts; the live instrumentation didn't fit them. I really would like to know who made that call because Da Beatminerz were REALLY missed this time around. Secondly, the lyrics weren't bad, but they weren't particularly dynamic either. Going back to their aforementioned debuts, the content was largely on point, but the penmanship was not present here outside of "Headz Are Reddee Pt. II." I'm not sure what it was, but I feel the production altered the quality of the lyrics (you couldn't miss it). Third, I can tell they were trying to balance things in terms of the members' appearances, but it didn't come across all that well. It seemed like Buck was more focused behind the boards and less on the mic while Heltah Skeltah and Starang weren't present all that much. With this being their very first effort as a "clik," they should've did a better job in this regard, just saying. Overall, I'll go with a very generous 3.5 star rating for this album, which moved a respectable 350,000 units. (UPDATE: I've changed my rating from a 3.5 to 3 stars. 3.5 would suggest an album that's "extremely good, but lacking a bit" and "For The People" is not that album. There's no way I could give this album a 3.5 or any other higher rating.) They would eventually get it right on 2006's incredible "The Last Stand," which is what this album should've been. Ultimately, "For The People" was to have been an apppropriate title, but it just resulted in a true missed opportunity across the board.
Posted by Wayne M. at Saturday, May 20, 2017