For the first '97 retrospective, this is coming verbatim from a previous post on January 28, 2014. Any new thoughts will be bold and italicized. 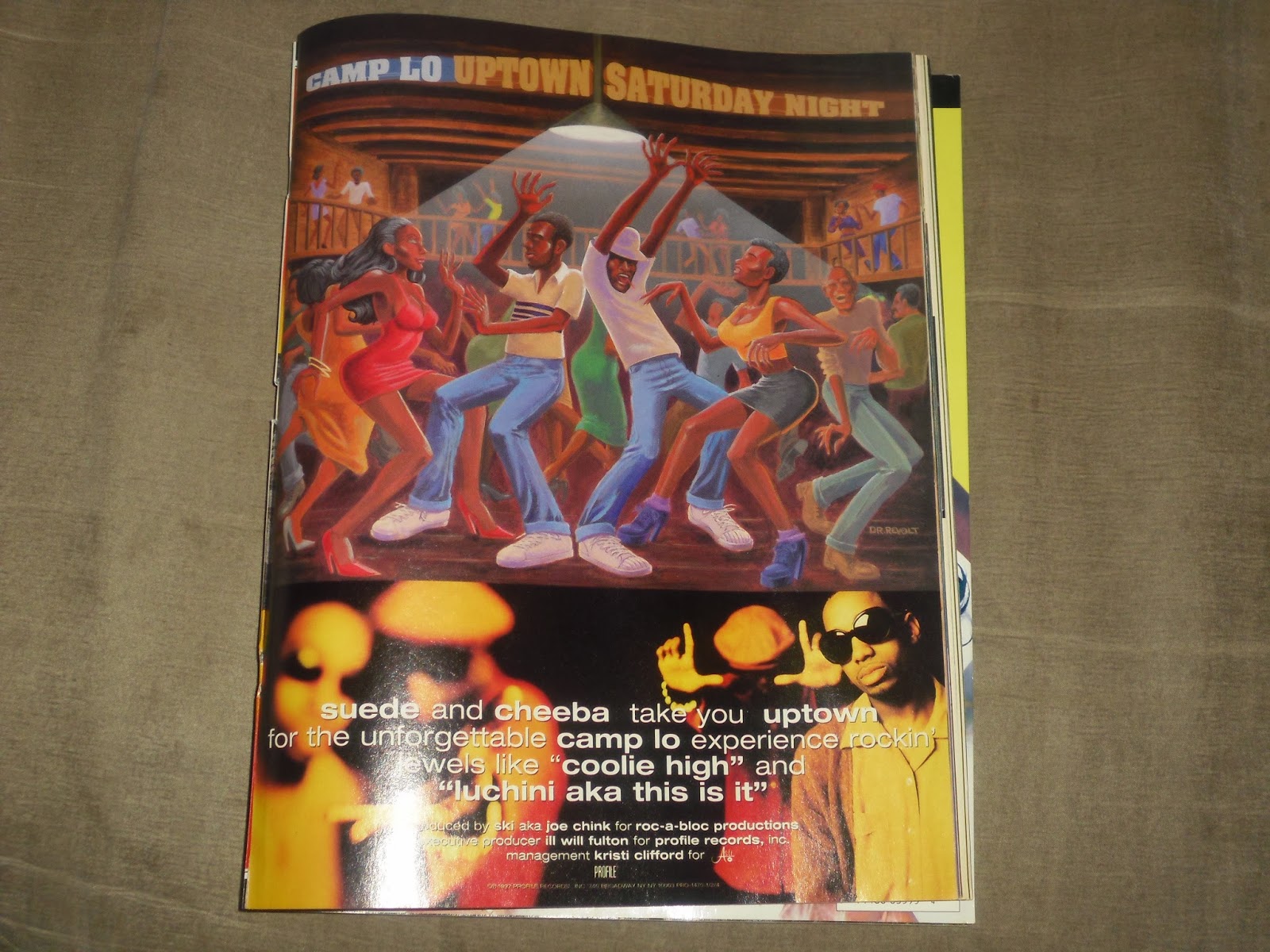 Prior to this post, I had this CD in my ride for the last day or so. I kept thinking to myself, "I can't wait until I get to the 1997 Hip Hop Nostalgia sessions to talk about this album, I gotta do this now! Lol. And here we are! Loyal reader, I have to tell you up front that this album for me (like MANY others) is simply loaded with nostalgia, which is of course one of the main reasons why this album still holds up for me today after 17 years (20 years now, lol). Before I get to the album, allow me to share a story. I may show my age just a little bit, but it's all good, lol! (I never have problems showing my age, lol. As of this post, I'm 32 and proud of it.)


Although I can't recall which month, it was the early part of 1997 when I first saw the "Luchini" video on Rap City. Not only was the video very good, but the way it ended with a sample of "Swing" really left a good impression on me. Then in June of '97, again on Rap City, I saw the "Good Times" inspired video "Black Nostaljack", which was also very good. There was another sample, this time in the form of "Krystal Karrington", and it was after that video I became sold on Camp Lo. I had to cop this album! So on Saturday, June 28th, three days after my birthday (and the same night that Tyson and Holyfield had that infamous rematch which saw Tyson bite his ear, smh+lol, and I watched it too), my great aunt Barbara took me to a local spot, "Crockett's Records Tapes & CDs", and along with Wu-Tang's "Wu-Tang Forever", I finally bought this album! $30.00 well spent and I was happy as hell!!!!! I still own that same CD and it plays well to this day. Even though this likely won't be the end of my stories on this album, lol, I'm going to speak on Camp Lo, obviously, before I get to the album.


Geechie Suede and Sonny Cheeba initially made their debut on the "Great White Hype" soundtrack in 1996 with the smooth hit "Coolie High". I actually didn't hear this song until I bought their album. In addition to the style, grace, and flair they had on the mic, these brothers were really influenced by the 70s decade, as evident with the album title (taken as a homage to Bill Cosby and Sidney Poitier's classic film of the same title) and cover (taken as another homage to the "Good Times" TV sitcom, in this case the painting that appears at the end of the opening credits). I respected that a lot and it adds a true retro style, sound, and feel to the album. So without further delay, let's go back to 1997 with the debut from Camp Lo!

(Sidenote: I think The Source magazine was the only publication at the time to review this album, giving it a low 3 mic rating. What I'm going to do is include some of the comments they made about a few of the songs and compare them with my thoughts.) 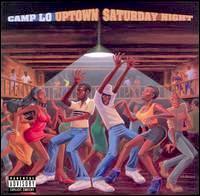 
1. Krystal Karrington
In an interview with The Source (issue #89, February 1997), they were asked what was with "weird" lines like "I get krystal karrington, ice rock gritty/Carlito influenced heat flashes.....". Geechie responded by saying "that's just us trying to be the flyest MCs", and he was right. With this being the obvious opener, lol, it was the first song I heard after I took the plastic off the CD. I remember going crazy when the beat dropped and it always takes me back to that moment in time. One of the dopest openers ever. 5 out of 5


"This is it what, luchini pourin from the sky let's get rich what!"


That one line sums up this CLASSIC perfectly. It's all about the positive lusting after the lavish life of riches and this song captures all of that. I love the way Geechie starts this one when the beat drops, coming off smoothly dope. You can also tell he and Sonny had the time of their lives when making this video. Classic material. 5 out of 5

3. Park Joint
I never got a chance to rock this at the park back in the summer of 97 (more on that later), but I guarantee you it would've sounded dope as hell. They gave this the right title, because when you listen to it, it would make a park live. 4 out of 5

What The Source said ["Trugoy adds the Native Tongue touch"]

I still would've liked to have heard Posdnuos on this one with Geechie, Sonny, and Trugoy to get the full Camp Lo/De La experience. Either way, this collabo was very good and fun. 4 out of 5

5. Killin Em Softly
I've always considered this the "sleeper song" of the album. Even though Geechie and Sonny are two of the most easy going cats you'll ever find, they show a slight aggressive side here. Now check this out, it doesn't hit you till the end that they weren't saying "killin em softly" in the other sense, but rather "killin em softly" with their style and grace, which is something that they were tremendous at. It works with this tight song. 4 out of 5


6. Sparkle
My long time friend Shaun would go crazy whenever I played this one! Sonny and Geechie work this beat SO nicely it's an understatement. Speaking of the beat, it's VERY nice, upbeat, smooth and dazzling all at the same time. 5 out of 5

I disagree with The Source saying this was the disc's strongest moment, and respectively it's far from it. I honestly used to skip this one a lot back in the day, but over time it grew on me a little more. 3.5 out of 5

What The Source said ["a kinetic duet with Butterfly, who incidentally sounds strikingly similar to the Digable Planets' leader"]

"Check this I don't hate players, I'm from the crown rhyme sayers/Whateva kid, sayers get down wit no delayin/I play my cards shark style, kings, and aces/Welcome to New York the illest of all places" -Ish

I laughed at The Source's comment because the reviewer had to know it was Ish from Digable Planets, lol. He stops by for this fast paced collabo with Mr. Suede. Geechie does his thing as usual, but Ish kinda steals the show on this one. 5 out of 5


9. Rockin It AKA Spanish Harlem

"She said that I can call her Genie, bought me a Martini/Some complements of my paraphernalia from Australia" -Geechie Suede

I have another long time friend named Marcellous who LOVED this beat, and he also went crazy every time I played it. It's a dope party jam and one of the my favorite songs on the album. 5 out of 5


This is not boring and it doesn't have any type of UMC's vibe in my view. It's another fast paced song which saw Sonny going in just a little, in true Camp Lo fashion. 4 out of 5

What The Source said ["a dreary posse cut gone awry"]

Again I disagreed with The Source here. Ski's beat was a bit experimental, even for 1997, but I had no issues with it. I still have no idea who the guests were or where they came from, however, they don't take away from Sonny and Geechie's presence. 3 out of 5

12. Nicky Barnes AKA It's Alright

13. Black Nostaljack AKA Come On

THIS song filler?? I don't think so, lol. This is another classic right here. It may be lesser known than "Luchini", but hot damn it's just as good. 5 out of 5


14. Coolie High
As mentioned up top, this was their debut and it was a nice and smooth one. This showed what they were capable of and it worked like magic. This could be looked at as a precursor to "Luchini" now with hindsight being 20/20. Another Camp Lo classic. 5 out of 5

15. Sparkle (Mr. Midnight Remix)
While this remix is a little more mellow than the original, overall it's not better but still very good though. 4 out of 5


Allow me to get the rating out first. I've always given this album a solid 4.5 star rating and I stand by it today. Although the nostalgic vibe is SO strong, as much as I want to, I can't go with 5 stars here. It's damn close though. (Nostalgic wise, this is a clear cut 5 star album for me, but overall the strong 4.5 star rating remains.)  Mr. Suede and Mr. Cheeba brought a true hip hop style (with flair and gusto) along with a respectable sense of history to match and what resulted was one of the most fun, enjoyable albums I've ever heard. And while "Luchini" was a popular hit (their biggest to date) and one of the best singles of 1997, the album was unfortunately slept on in a major way. Not sure if it was the slight lack of promotion or what, but it never received the props it deserved. They may not offer a lot in terms of lyricism and subject matter, but they make up for it with their confident, charismatic flow and nice breath control on the mic. As far as the production, the underrated Ski did an outstanding job behind the boards. I recall hearing that most, if not all, of these beats were intended for Jay Z, but he turned them down. Whether that was true or not, Geechie and Sonny more than held their own over these beats. Whenever I listen to this album today, it instantly takes me back to the summer of 1997, still to this day the best summer I ever had. The memories will always remain as long as I live and the nostalgia will stay strong too. This album also has been out of print for the longest time, and while I would honestly recommend a free download if it's out of print, I humbly say support these men by copping the MP3 version via iTunes, Amazon, etc (for the decent price of $9.99), it's worth it. I can't thank Camp Lo, Ski, and everyone else involved enough for this album. Fantastic job!

And if Geechie and Sonny are reading this, please let me know what you think!!!

And we're not done yet, lol.

In the first week of 2017, Camp Lo decided to go in the vault and release this joint, "On The Way Uptown (The Uptown Saturday Night Demo)." This features outtakes, demo verses of songs that made the final cut of "Uptown Saturday Night" and of course other songs that didn't make the album. There are quite a few songs here I feel should've made the album, however, I'm always be satisfied with the final product. Courtesy of 2dopeboyz.com, you can stream it below.