Kid Capri's "Soundtrack To The Streets"

Before I begin to talk about Kid Capri's second album, I have a small story I want to share. Another one of those right, lol?? It had to have been early-mid 1994 (or 1995), my step dad (at the time) Wade had took me the local spot, "Crockett's Records, Tapes & CDs." My plan that day was to cop Doo Wop's "Bad Boys Vol. 2" mixtape. When I got home, I wasn't even 10 minutes into the tape before Wade overheard something he apparently didn't approve of and made me take the tape back to the store, unfortunately, and exchange it for something else, smh, and I, of course, was NOT happy. It didn't take me long before a certain tape caught my eye (remember the days when the mixtape game was a competitive environment and the local spots had all sorts of exclusive tapes from multiple DJs). The tape in question was named "Kid Capri Live" and I was just as happy to pick this one up like the Doo Wop tape, all for $10. I remember liking the tape a lot at the time, even though I could barely hear the crowd and I could CLEARLY hear Capri's voice as he commanded the crowd's attention, lol. I can't recall what actually happened to the tape, but I did hold on to it for a long time. In addition, I knew of Capri from his stint as the DJ on "Def Comedy Jam" and during a period when I wanted to become a DJ, he really was one of my first influences.

In reference to this album, which is more of a compilation, I've always been aware of it, but never got a chance to check it out, and honestly I don't ever recall seeing it in any of the spots I bought CDs from in 1998. Almost 20 years later, I was finally able to get my hands on a brand new copy of the album, and this will actually be my very first time listening to it throughout this review. Looking at the lineup, it's basically a who's who of artists who were on the scene in '98 and with that said, let's get to it!!! 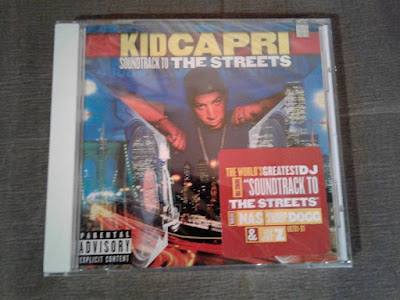 
All songs produced by Kid Capri, expect where noted

This also appeared on Jay's "Vol. 2... Hard Knock Life", released two months prior to this album. My feelings on this haven't changed, so I'll just use my thoughts verbatim, taken from a portion of my Jay-Z project:

"With all due respect, I'm not sure why Kid Capri was on this one, because it's far from a "party anthem." (Well, I know why he was on this now, lol. It could be considered a party anthem of sorts.) In fact, this seemed like it should've been titled "Ride Or Die" rather than song #4 (on the "Hard Knock Life" album) when you listen to the lyrics (which are plentiful on this one).
*4 out of 5*

3. "Interlude"
Snoop Doggy Dogg and Warren G
This would be the first of MANY interludes on this album.

You know, the first ever Snoop/Slick Rick collaboration should've been a big deal, especially after the former's classic remake of "La-Di-Da-Di", but with Rick serving a prison sentence during a time when Snoop was one of the hottest artists in hip hop, I can see why it didn't happen when it should've. As a song, it's decent. This also appeared on Rick's album, "The Art of Storytelling."
*3 out of 5*

5. "The Hit Off"
Featuring Busta Rhymes and Spliff Star

This was a decent showcase of two members of the Flipmode Squad, but considering what Busta (and Spliff to a lesser extent) were capable of giving us at this point, it lacked a spark to push it over the top.
*3 out of 5*

7. "Soundtrack To The Streets"
Featuring Nas, Background Vocals by Allure

Capri couldn't have made a better choice than Nas to represent the title track, however, even with Nas in full "Nas Escobar" mode at this point, the song itself, again, was decent but sadly nothing special.
*3 out of 5*

8. "Interview"
Joe Clair and Common
Joe, formerly of Rap City, and Common speak on the importance of the DJ.

9. "Freestyle"
Featuring Ranjahs
This came off more like a song than a freestyle in my opinion. Not bad though. The Ranjahs would go on to have a rather short stint with Roc-A-Fella Records.

10. "My Niggaz"
Featuring The LOX and Foxy Brown

Foxy is with 2/3 of the LOX, Styles P and Sheek. Again, this was decent, but at the same time, nothing that we didn't already hear on LOX's "Money, Power & Respect" and done better quite frankly.
*3 out of 5*

"Alright" is the one word to describe this song. It almost seemed more like a Jermaine Dupri song than anything else. Let's move on.
*2.5 out of 5*

14. "When We Party"
Featuring Luke

The sampling of Strafe's "Set It Off" was cool, but that's about it. There was a point when these type of "call & response" songs were dope as hell, but in the late 90s, they were starting to become a lost art, so to speak. And WHY was this censored, smh??
*2 out of 5*

The sampling of Experience Unlimited's "Knock Him Out Sugar Ray" gave this one a real throwback vibe with Mr. Cheeks leading the way along side Capri. Good stuff.
*3 out of 5*

Alongside the likes of Nore and the late Big Pun, even Capri himself comes through with a verse, which wasn't bad. Decent song all things considered with a VERY abrupt ending.
*3 out of 5*

The good about this song is that it attempts to breath some life into this album, with Sadat X and Diamond trying as much as they can. The bad, or should I say disappointing, is that Grand Puba and Lord Jamar really came with sub-par verses, almost like they weren't feeling this track for some reason.
*3 out of 5*

19. "Interview 2"
Joe Clair and Common
Common talks about "the next step" in hip hop.

I really liked this remix better than the original that's for sure. It seemed like Snoop and Rick were a bit more energetic this time around.
*4 out of 5*

This was, say it with me, a decent song as Capri links up with the teacha KRS-One. It's decent like I said, but I can't help but think that something was missing, can't quite put my finger on it.
*3 out of 5*

Buckshot already had a song with this same title the year prior, so while this isn't an official remix, you can say this was "Follow Me" revisited. It's short, sweet and to the point.
*3 out of 5*

25. "One On One"
Featuring Ras Kass and Punchline

You know, part of me wants to go the full monty on this song based on the ILL punchlines throughout the song and the fact that the album surprisingly doesn't end on an anti-climatic note. Ras and Punchline, the latter best known for being part of the eMC collective, go back and forth with no hook and it's tight.
*4 out of 5*

Man, I think this is the first I've reviewed an album with multiple "3 out of 5" ratings up and down the lineup. Don't get me wrong, there are a few highlights here (and I stress "a few"), such as the contributions from Jay-Z, Ras Kass & Punchline and Snoop & Slick Rick, but honestly, everything else was rather miss. Speaking of which, when you look at the TALENT on this album (basically a "mixtape compilation album"), this was certainly a "can't miss" project. Capri was excellent on the wheels of steel, but when it came to the production, which he did every song but one, it felt short of expectations, and had the production been done by other names in the industry at this point, the results would've been much better in my view. You don't even have to come into this album expecting something special, because damn near every artist has done something better than what we got here. I'm going with a 3 star rating for "Soundtrack To The Streets." I'm sure most of you reading has heard Jay-Z's "Like That" due to its inclusion on the "Hard Knock Life" album, but if you haven't heard "We Unified" and "One On One", check those out, otherwise, and it pains me to say this, don't bother with the rest. I have all the respect in the world for Capri, but this album was a true missed opportunity.
Posted by Wayne M. at Sunday, November 20, 2016