Even though I reviewed Mobb Deep's 2014 album "Infamous Mobb Deep," I'm going to back up a bit for the purposes of this particular revisit.


On December 11, 2001, the Mobb released their 5th album, "Infamy," and you can check the blog archives for my review. Personally, not only does this album have a strong dose of nostalgia with me (this was on heavy rotation during my senior year in high school), I've always thought this was a very good, 3.5 star album. While the production was mostly dope, Havoc brought the goods lyrically, while Prodigy, in my (long time) view, was still affected by the onslaught from Jay-Z's "Takeover." I'll say this, if Prodigy was going through some things on a personal level, more than the public knew/knows, that's unfortunate, however, since we're talking about the music, "Takeover" did affect him quite a bit, whether he wants to admit it or not, and when you consider his half-hearted attempts lyrically getting at Jay on the "Infamy" album, he might as well not have said anything, because I've often said, if you're going to come at the likes of Jay-Z, you better come hard (and correct) or not come at all. Continuing on with the "Infamy" album, most heads weren't pleased, leading to the mixed feedback and allegations of them selling out (thanks to the 112 assisted "Hey Luv"). They would part ways with Loud Records in 2003, later releasing the pretty good, 2 disc "Free Agents: Murda Mix Tape," and I recommend you check that out if you haven't heard it already. Likely because of the buzz of "Free Agents," Jive Records came calling and that brings us to their 6th album, "Amerikaz Nightmare." 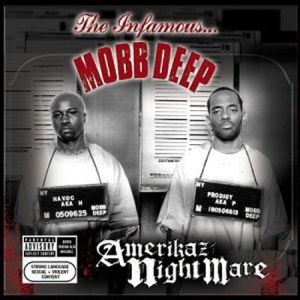 
All songs produced by Havoc, except where noted

Powered by an Amon Duul sample courtesy of "Kismet," Havoc and Prodigy start things with the dope title track featuring the things we would expect from the Mobb: a slammin' track with lyrical gunplay.
*4 out of 5*

2. "Win Or Lose"
Produced by The Alchemist

Jean Plum's "Here I Go Again" was nicely sampled for this one. It's not a deep song per se, but Havoc and Prodigy, back and forth, 4 bar style, make their cases for rising "to the top of world, win or lose." Nothing we haven't heard before, but still very good stuff.
*4 out of 5*

Clocking in at 2:56, this was short, sweet and to the point. The Mobb has been bringing it, really since 1994 and said dopeness continues with this appropriately titled banger.
*4 out of 5*

This is one of those joints defined as a lyrical word of warning to anyone thinking of testing the Mobb, either in the studio or on the streets. Speaking of lyrical, Havoc's opening verse was so dope and of course when you have the late Nate Dogg on the hook, it usually amounts to something tight and that's what we get here. This would not be the last time Havoc and Prodigy link up with Nate.
*4 out of 5*

5. "Got It Twisted"
Produced by The Alchemist 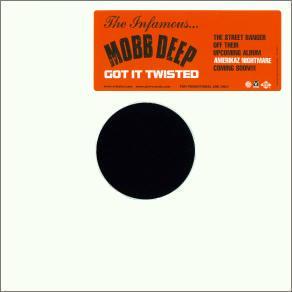 Alchemist comes through again with the samples, featuring ill usage of Thomas Dolby's "She Blinded Me With Science" and Mikey Dread's "Saturday Night Style" and of course said samples are backed by a thumping beat. You know, revisiting this, it sounds like this one was for the clubs, but even with the hardness present, it wouldn't be out of place if a DJ threw this on, and it's probably one of the Mobb's most underrated gems.
*5 out of 5*

6. "When You Hear The"
Produced by The Alchemist

Ok, loyal reader, hear me out on this one: When you listen to this production closely, another dope one by Alchemist, think back to the movie "Scarface." Remember the scene when Tony and Manolo enter the club and when Tony sees his sister Gina dancing with "some guy," there's a closeup of Tony, and in the midst of the closeup, this sinister music plays in the background, as if to suggest someone or something is about to feel the wrath of Tony Montana? The more I listen to this one, it makes me think Alchemist somehow utilized that sinister sample for this slice of hardcore Mobb shit. (Alc, if you're reading this, please confirm whether this is the case or not.)
*4.5 out of 5*

I was close to saying "if you've heard a song like this, you've heard them all," but quite frankly, I can't say that this time around. On one end, it seems like they're trying to cater to the ladies in some form, no matter how hard this is, and on the other end, it seems like they're not, if that makes sense. Decent song though, featuring a nice beat by Red Spyda, who came nice with the organs in the background.
*3 out of 5*

If the previous song was for the ladies in some form, this one had to be for those shorties, male and female, under the age of 21. The hook says it all if you ask me.
*3 out of 5*

Havoc and Prodigy over a Lil Jon production? Say it ain't so. Well, this did happen in '04, right in the midst of the "Crunk movement." Since Lil Jon was one of the hot commodities in hip hop at this point (still not sure why), it wasn't a surprise to know that most artists were either trying to get him on a track, get a beat from him, or both, sometimes in the case of boosting sales for his/her album that's about to drop, and I feel that's what the Mobb tried to do here. It didn't get the attention they might've wanted, but all things considered, it's a good song. I could've done without Jon's voice on this one, but the effect is not ruined.
*4 out of 5*

10. "One Of Ours Part II"
Featuring Jadakiss

Part one was included on the "Barbershop 2: Back In Business" soundtrack with the same beat, and this time around, the same beat was used along with a show stealing, closing verse by The LOX's Jadakiss. Again, dope stuff here.
*5 out of 5*

While this was another slice of that aggressive Mobb sound, taking the title into consideration, I would've liked to hear Havoc and Prodigy go the storytelling route, "heist style," tag team/back and forth, over the same beat. Listening to it closely, this joint sounds like something out of the G-Unit playbook, two years before they would sign with the crew.
*4 out of 5*

12. "Throw Your Hands (In The Air)"
Produced by Kanye West

Considering how hot Kanye was starting to get in '04, I'm a little surprised that this one didn't take off like it could've, because it's a pretty good song; and let's face it, the Mobb was never too hard for the radio.
*4 out of 5*

13. "Get Me"
Featuring Littles and Noyd

A fairly good song here, featuring a nice verse from Littles.
*3 out of 5*

"Don't get caught sleeping on anything," that has to be the theme for "We Up." Decent, nothing more or less.
*3 out of 5*

"Some things never change," I certainly understand that, especially in today's world circa 2016. Havoc and Prodigy reminisce a bit, while at the same time talking about how things won't change, from back in the day to (then) present day '04.
*4 out of 5*

16. "Got It Twisted (Remix)"
Featuring Twista
Produced by The Alchemist

When I saw that there was a remix to this, I wasn't surprised because usually when a song so dope comes along, you can expect a remix, but what I didn't expect was the Twista feature. I've often said that I've never been a fan of Twista like that, but I give him props for being able to flow as fast as he can, seemingly at a moment's notice. This one, moreso than the original, was aiming for the ladies (and you won't find Twista too far behind in this case), but to Twista's credit, he came with a dope verse here. Of course it holds no candle to the original, but it's still very good.
*4 out of 5*

You know, it's amazing what time (and perspective) can do to certain albums. I've often said that this album may be the most underrated in the Mobb's discography and I think I still stand by that today. It's a lot better than I remembered, and even though the nostalgia for this one isn't as strong, I'd put this over "Infamy," but not in a blowout. The production was largely on point, while Havoc and Prodigy laced things up on the lyrical end; the latter was much better this time around than on "Infamy." Compared to their previous albums, when talking sales, it was a bit of a step down, as "Amerikaz Nightmare" moved 109,000 units in its first week (a huge success by today's standards), eventually moving about 400,000 units to date, and I believe this is what led to their departure from Jive Records. The lack of buzz and promotion certainly didn't help matters, but their signing with G-Unit in 2006 made noise, for the right and wrong reasons (you can of course revisit the archives for my very detailed review of "Blood Money"). In the end, I'll go with a very solid 4 star rating for "Amerikaz Nightmare" and a recommendation to revisit if you haven't bumped it in a long time.
Posted by Wayne M. at Friday, September 02, 2016