Now, even before you read on, I'm sure this particular album is a rather interesting choice for a revisit, but as usual I have my reasons. After dropping two excellent albums in the form of 1994's "Tical" and 1998's "Tical 2000: Judgement Day," respectively, Meth returned in 2004 with his somewhat long awaited 3rd album, "Tical O: The Prequel." At this point, looking back, this album wasn't on my radar and quite frankly I don't think it was on anyone else's either. I only bumped this album once and never really offered an opinion on it, which kinda necessitates the review right there. In addition, every piece of feedback I've read on this album has ranged from mixed to downright negative across the board, plus Sean "Puffy/P. Diddy" Combs and Harve Pierre were brought in to basically oversee the album (some would say inexplicably), prompting the following comments from Meth later:

"On the third LP, it was suggested to bring in Harve Pierre and P. Diddy. Who am I to argue? Puff knows how to sell some records. But that wasn't the direction to go in, and I know that now."

Loyal reader, I want you to keep those comments in mind throughout this review and during my final words, because you know I will have those. Reviewing the tracklist again, especially the guests and producers, it's quite the assorted list and all of this will likely play key roles in said album. So, has time ultimately been kind to this album or was all the mixed and negative feedback justified? We shall see as we go back to 2004. (The album cover is one of the most unique I've ever seen, not sure what to think of it.) 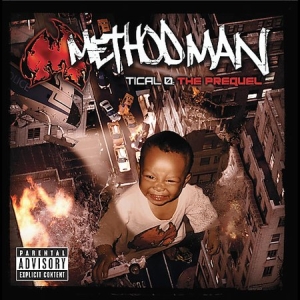 "Let me get my tool belt, for rappers that can use help/Now that Meth is back, you can tell me how my shoes felt/Just like Shaq in them size 22's/Except my game's not a game and I don't play by any rules man"

"Take it from the most slept on, you're wearin' open-toe sandals/And I'm lookin' for some new toes to step on/And one to build a rep on, you all got me fucked up/My crew stick bitches like you for actin' stuck up"

Clocking in at 2:07, Meth kept it brief, half short and twice strong; Street didn't come with a verse, but it's all good. In my view, he sounded energetic here, coming with several dope lines throughout. Good start.
*4 out of 5*

Meth attempted the same thing Ghostface did with "Tush," which was featured on the latter's "Pretty Toney Album" that was released one month before this Tical 0, even down to the Missy feature. Considering the party type vibe, it was clear to me this was aiming for mainstream acceptance. It didn't get that acceptance, but it's simply ok, nothing more.
*2.5 out of 5*

The album's first single, which also appeared in the "Def Jam Fight For NY" video game, is pretty damn good, featuring DOPE lines from Meth and a Busta verse which finds him riding the beat in true Busta fashion. Speaking of Busta, towards the end he says, "logically we should've did this shit a long time ago," and man I agree with that. Imagine Meth and Busta, any time between '94 and '99, over a RZA track. I'm satisfied with what we got here though.
*4 out of 5*

5. "The Motto"
Produced by Nashiem Myrick and Lee Stone

This somewhat apply titled song was decent, but listening to it, I got the impression that something was missing and I can't quite put my finger on it; it's like you're expecting something dope, but unfortunately you get the opposite.
*3 out of 5*

6. "We Some Dogs"
Featuring Redman and Snoop Dogg
Produced by Denaun Porter

If the previous song was "somewhat apply titled," this joint here was literally apply titled. Meth, Red and Snoop all make their own cases at "being dogs." Meth and Snoop verses have a lot in common as you'll hear. It's hilarious in a sense, but still a good song.
*4 out of 5*

7. "The Turn"
Featuring Raekwon
Produced by The RZA

Well, this was NO "Meth vs. Chef" I can tell you that. This one could've been so much better considering the Wu elements involved, just saying.
*2.5 out of 5*

Anyone noticing a trend with these ratings so far?

In short, this one is strictly for the ladies, however, it's not catchy or dope like both versions of "All I Need" or even "Break Ups 2 Make Ups." I'm sure Meth meant no harm, but at the end of the last verse, he says "God bless the bitch that made you." Um, let's move on.
*2 out of 5*

As a long time fan of Meth and Luda, my God this was a complete missed opportunity. Instead of something incredibly tight (both men with two verses each and/or going back and forth over a nice beat), we get this song talking about the obvious, catering to the ladies more than anything else. Even Luda sounds uninspired in this guest spot.
*1.5 out of 5*

Ok, so we get a THIRD song for the ladies? Is this a Meth album? I don't mean to be too critical, but somehow this is even worse than the previous two songs. We have heard songs like this done before and better I might add. If there's one MC who doesn't need to try this hard, it's Meth.
*1 out of 5*

11. "Who Ya Rollin Wit"
Additional Vocals by StreetLife and Shawnna
Produced by Jelly Roll

"Y'all know my flavor, pack more punch than Tropical." I think that's one of the most generic lines I've ever heard from Meth. The accompanying song is not much better, featuring a BAD hook, probably the worst hook on any Meth song, coming off as almost a waste of the talents of everyone involved.
*1.5 out of 5*

12. "Never Hold Back"
Featuring Saukrates and E3
Produced by E3

I had to chuckle a little bit at Meth's shot towards Def Jam by saying, "another Def Jam, where we don't make stars, we just sign em." There was a bit of potential in an obvious Meth/Saukrates collabo, but it's not realized or fulfilled here. Another missed opportunity.
*2 out of 5*

I commend Meth for going through this one with no hook, but he did himself no favors with the lazy rhymes throughout. Judging by how it ends, I wouldn't be surprised if he couldn't wait to get this song over with.
*1.5 out of 5*

The only thing this one was missing was an appearance by Redman. If this was intended to cold rock a party, it succeeded in that regard. Good song here.
*3.5 out of 5*

Backed by a nice sample courtesy of The Detroit Emeralds' "I Just Don't Know About This Girl," Meth and Ghost give hilarious, hip hop accounts of the day after a party they attended, starting at 10 in the morning.
*4 out of 5*

When I think of dope Meth/StreetLife collabos, the first two joints that come to mind are "Dangerous Grounds" and "Suspect Chin Music." This one doesn't come close to either of those two songs and ends up just merely ok, nothing more.
*2.5 out of 5*

As if this album couldn't close on a more anti-climatic note, Def Poet Black Ice has some apparent words of wisdom for us all.

First off, I would love to know what the discussions were between Meth, Puff and Harve, because if their visions was for Meth to come more commercial/mainstream and have less of a Wu-Tang sound, uh, this failed miserably. "The Prequel," "What's Happenin," "We Some Dogs," "Afterparty" and even "Act Right" are the SOLE highlights here, but it's not enough to save this album. There's a true lack of cohesion and missed opportunities, the quality is tremendously hit and miss (more misses), lyrically Meth is saying nothing new (going back and forth between inspired on some songs and just totally not caring on others) and the production is largely forgettable. Surprisingly enough, the album debuted at #2 on the "Billboard 200" chart and ended up with a Platinum certification. He would return and right the ship, so to speak, two years later with album #4, "4:21: The Day After," which has been reviewed on the blog along with his first two albums. I'm going with a somewhat generous 2.5 star rating. The highlights here are worth checking out, but otherwise don't bother with "Tical 0: The Prequel."
Posted by Wayne M. at Friday, June 24, 2016