Group Home's 1995 debut, "Livin Proof," is an album I've had on my "revisit radar" for quite some time. I'm going to make a few points before I begin to talk about the album. I first heard members Lil' Dap and Melachi the Nutcracker (who will be referred to as Melachi moving forward in this post) like most did via Gang Starr's "Hard To Earn" on the following songs:

Even with these songs, you could tell that Dap and Melachi weren't the best lyrically, but when backed by superior DJ Premier production, they would sound more better than what they were, respectively. With that said, this particular album is known mostly for the TOP NOTCH production by Premier, which many consider to be his finest work ever behind the boards. I'm sure that claim will still hold up even during this revisit, which will also find me rating the songs on two fronts: the lyrics and the production (and trust me, more will be said as you read on). So, let's head back to 1995 for Group Home's debut. 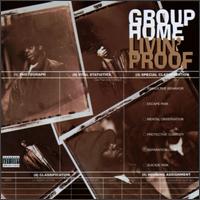 
All songs produced by DJ Premier (except where noted)

1. "Intro"
This 48 second intro is even blessed with a good Premier instrumental. Are we ready? Let's do it!

Loyal reader, this beat is simply incredible, no question, complete with a well timed Nas sample courtesy of "It Ain't Hard To Tell," also produced by Premier. When you see the song title, of course this is something we've heard before (life experiences in their environments). Dap comes off decent here, yet still sub-par in his delivery, while Melachi is just generic across the board, with lines like, "I'll hit ya moms in the head wit a metal pipe" and "so stand back, I'm hittin' harder than a fuckin' tank." DOPE production, average (at best) lyrics.
Production- 5 out of 5
Lyrics- 2.5 out of 5

History has judged this one to be a classic (I believe this was the second single released from the album) and I won't argue with that one. Production wise, this is straight heat and it's dope as hell, featuring another well timed sample in the form of Wu-Tang Clan's already classic "C.R.E.A.M." On the lyrical side, Dap, again, comes off decent, especially with his verses chronicling his life story and where he intends to go; Melachi, on the other hand, is a bit less generic and more straightforward as he can be here.
Production- 5 out of 5
Lyrics- 3.5 out of 5

If you take the Rap game serious, you better come hard and correct, yes indeed. All involved bring their own hardness to this one, and that even includes Melachi, who dropped a rather good verse of his own.
Production and lyrics- 4 out of 5

The well timed samples continue here, courtesy of Wu-Tang Clan's "Da Mystery Of Chessboxin" and Das EFX's "Real Hip Hop." I like the theme to this one, talking about certain life happenings/experiences causing you to be suspended in time, or should I say putting you in a frame of mind when it seems like time is at a standstill. This is touched upon in Dap's opening verse, probably the best verse in the song. Melachi was pretty much hit and miss throughout ("Nutcracker doing hits by the dozen/When I make moves, I ride the train with my cousin", smh+lol, can you get any more generic here). All things considered, a very good song, also coming with a spoken word at the end by Jeru The Damaja.
Production- 5 out of 5
Lyrics- 3.5 out of 5

As far as I'm concerned, guest Absaloot had the best verses on this song; Melachi's words weren't bad per se, just forgettable. And yes, we have heard these types of songs before (and done better), where the artist(s) in question will do what it takes for the finer things in life.
Production- 4 out of 5
Lyrics- 2.5 out of 5

One thing I can say about Dap moreso than Melachi is that he more often than not manages to stay on topic, especially on this apply titled song. Speaking of Melachi, both of his verses are the definitions of "generic," nothing more or less.
Production- 5 out of 5
Lyrics- 2.5 out of 5

Note to aspiring artists: if you make a song where you're talking to God in any form, please don't have any curse words in the song, it defeats the entire purpose. Apparently, Dap and Melachi were asking to be forgiven for their sins, however, you have to ask yourself do they really deserve forgiveness when you analyze the content or no? But even if you don't look at the song too seriously, it's ok, nothing more; Dap was ok, Melachi was sub-par.
Production- 4 out of 5
Lyrics- 2 out of 5

9. "Baby Pa"
This was more or less an extended interlude, a pointless one at that.

Leave it to Premier to bring his signature sound in with an Issac Hayes sample ("I Feel Like Loving You Today") and STILL make it sound SO good. I also liked how Dap and Melachi stressed, in their own ways, looking ahead to the future as the year 2000 was on its way.
Production- 5 out of 5
Lyrics- 3.5 out of 5

I'm still not sure if this joint was released before "Livin' Proof," however, history has also judged this one to be a classic; and even with the generic rhymes of both Dap and Melachi, this beat is/was SO dope that nothing could bring it down. I get what Dap and Melachi was going for here, but they didn't work this beat like it should've been worked.
Production- 5 out of 5
Lyrics- 2 out of 5

You can take what I said in song #7 and apply it here. In addition, the production on this particular mix is better than its predecessor.
Production- 5 out of 5
Lyrics- 2.5 out of 5

13. "The Realness"
Featuring Smiley aka The Golden Child and Jack the Ripper

You can tell Mobb Deep's "Shook Ones Pt. II" was a classic at this point (wasn't even a year old yet) because already it's being sampled. That's no knock of course, because said sample works within the confines of this song. All involved, including Melachi, play their parts as well as possible on this Premier produced closer.
Production- 5 out of 5
Lyrics- 3 out of 5

Let's start with the production side shall we. As mentioned, this is some of Premier's finest work behind the boards. Since then, has he made some dope beats? Of course, but right now I honestly can't say if he has bested the production on "Livin Proof" or not, and man that's going to require some serious listening on my part to come to a decision like that, which is a testament to how DOPE Premier has been with his beats. It goes without saying that the production ALONE on this album would warrant a 5 star rating. It's also interesting to know that when I last talked about this album, I asked to "name an artist (or artists) who would've worked the beats on this album better, and the two names mentioned the most were Nas and Jeru The Damaja, which now brings me back to Lil' Dap and Melachi. Dap was decent here and there, but one of the issues I had with him was his voice and delivery, as you'd think this was his first time rapping on a major release. Melachi was all over the place, simply generic (and often times forgettable) across the board. Tom Doggett reviewed this album on rapreviews.com, and he made a good point in saying they were "amateurs on a professional album." Lyrically, this album would probably be 3 stars.

After this release, they would drop "A Tear for the Ghetto" in 1999, but let's be real here, whatever magic Dap and Melachi had was simply gone without Premier overseeing their work. They may still be active as we speak, but it's on SUCH a low-key level. All things considered, I'll go with a 3.5 star rating for "Livin Proof." Dap and Melachi should forever to grateful to Premier and the late Guru, because without "Livin Proof" and "Supastar," the two classics still remembered to this day, I shudder to think how this album as well as their tenure in the early-mid 90s might've panned out.
Posted by Wayne M. at Friday, June 17, 2016