As 1996 approached, I remember seeing ads in The Source magazine (man do I miss how GOOD that mag used to be) promoting Bahamadia's "UKNOWHOWWEDU" single as well as the debut album I'll be discussing in this post, "Kollage." The thing is, I was very interested in copping this in '96, but I don't think it was ever released outside of New York, because I didn't see it in any of the local spots I frequented in my local area. So, 20 years after its initial release, I'm finally getting around to checking this one out and it should be a great one. Let's head back to '96! 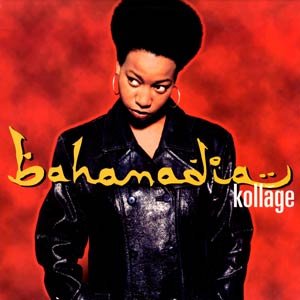 Not only did I peep Bahamadia's credentials on this one, but as the Jeru sample mentioned, she is "excellent with the wordplay" throughout this song. Her voice is VERY low-key and it's not a negative; she's clear with her words and you can understand everything she's saying.
*4 out of 5*

"Straight outta the metro, rhythm central/I'm innovative at the intro"

RIGHT from the beginning, I noticed the Catalyst's "Uzuri" sample, which was also used by Heltah Skeltah on the classic Fab 5 anthem, "Leflaur Leflah Eshkoshka," which was produced by Baby Paul, 1/2 of Da Beatminerz. Man, not only is the beat incredibly dope, but Bahamadia owns it with such a low-key force that's undeniable. I mean, you would think a beat like this would be too rugged for her, but she handled it oh so well.
*5 out of 5*

"I got it hemmed, mad methods to microphone mechanism from inner city/Curriculum to cuttin' edge for heads like circumcisions in your mental"

Of course you knew she would be right at home over a dope DJ Premier production, yes indeed, with WELL timed Nas and Lady Of Rage samples to match. She certainly comes with the "rugged ruff" here, especially on the lyrical end. DOPENESS here ladies and gentlemen.
*5 out of 5*

5. "Interlude"
A spoken word by the late Guru.

"Please accept these words that I possess/I'm like a damsel in distress in pursuit of happiness, I confess"

Note to aspiring female artists: THIS is how you make a song to the man of your eye. You see, Bahamadia didn't have to go all out and be over-sexual and the like, yet she takes a respectable, and of course low key approach to the man that is drawing her interest by confessing her feelings on record; such a GOOD song. N.O. Joe, mostly known for his tight productions on Rap-A-Lot Records, brings forth a smooth beat that she fits so well on. Again, GOOD stuff here.
*4 out of 5* 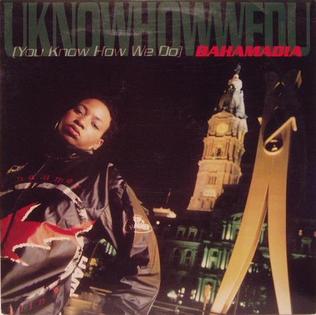 This pic above is the one I was referring to in the intro. I remember seeing this video on Rap City back in '96, always thought it was dope. Sadly, this didn't hit any radio stations in my area at the time and it would NOT have been out of place considering the laid back production provided by Ski. An underrated classic right here.
*5 out of 5*

8. "Interlude"
This was just an instrumental provided by Da Beatminerz.

Bahamadia does lyrical catch wreck here, probably one of the rare times you'll hear a spark of aggression in an otherwise low-key voice.
*4 out of 5*

When it comes to the lyrical capacity here, it is quite innovative for this femcee. Her wordplay must (continuously) be heard to be appreciated and she comes with such ILL lines on this song it's an understatement. The 3:22 flows right on by but never overstays its welcome.
*5 out of 5*

11. "Da Jawn"
Featuring and produced by The Roots

I first heard this one on DJ Juice's Volume 30 mixtape. It's lyrics galore here, as Bahamadia and Black Thought display some GREAT chemistry from start to finish. It's "da jawn" indeed, so tight. And yes, for the remaining 2 minutes or so of this song, they let the (dope) instrumental ride out.
*5 out of 5*

I can't recall where, but I know I've heard this song before (something about it sounds so familiar). She seemingly picks up where "I Confess" leaves off, as you get the impression the guy she's after in that song is who she's trying to meet up during this story. Speaking of which, the moral to this story is simply this, as she stated:

"To all the girls, do what you gotta do, but it ain't what you do it's how you do it"

Man, the dopeness continues with this banger. The ladies worked the "boom bap" sound provided by Premo to highly effective results, and it goes to show you that women don't have to be sexually provocative and more to be a force on the mic. They killed this one and I'll put this against any song with more than one female artist on it from the past 15 years or so. Excellent song. (RIP to K-Swift.)
*5 out of 5*

This emotional closer is Bahamadia's dedication to her child; she doesn't specify whether it's a boy or girl and I don't think I missed it. She states in her own way that as long as she's alive, her child will receive all the unconditional love in the world, and that right there is true motherhood at its finest and a such a NICE way to close an EXCELLENT album.
*5 out of 5*

Man, shame on the record stores back in the day for apparently not having this great album on their shelves. Lyrically, you can say that Bahamadia was ahead of her time with this release, because she stood out and I don't think we have seen that type of lyrical quality out of a femcee since the days of MC Lyte. Her low-key/serious yet commanding presence on the mic was undeniable and she ultimately exceeded on tight production provided by the likes of the late Guru, DJ Premier, Da Beatminerz, The Roots, Ski and N.O. Joe; hot damn that's an impressive lineup of producers. As far as the best hip hop album from a female goes in '96, I'll still give that nod to Heather B's debut "Takin Mine," however, if that's #1, "Kollage" is definitely 1A, no question. Overall, "Kollage" was a very minor success, only peaking at #126 on the "Billboard 200" chart, and even though "UKNOWHOWWEDU" enjoyed a respectable amount of exposure on BET, the album was heavily slept on and when you consider how STACKED 1996 was in hip hop, it's not hard to see why such an album fell through the cracks, so to speak, which was the same thing that Heather B's album experienced. Not too long after this release, Bahamadia, surprisingly or not, faded away from the scene and although she would drop "BB Queen" and "Good Rap Music," both of which may not have seen the light of day, she all but keeps a very low profile. Either way, I thank her for this strong 4.5 star album and I come with a high recommendation.
Posted by Wayne M. at Wednesday, June 08, 2016