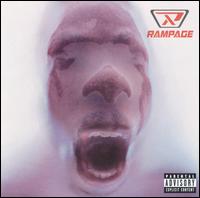 [This intro will be used verbatim, with comment taken from a brief post I did on this album back in 2012, and new/updated thoughts in bold.]

This was one unique album cover to say the very least. Rampage (AKA The Last Boy Scout) is best known for his early association with Busta Rhymes and the early days of the Flipmode Squad, as well as his verse on Craig Mack's classic "Flava In Ya Ear" remix and that probably was his best verse ever too. I can honestly say I wasn't anticipating a solo album from him, although he was fairly decent on the mic. That changed a little when I first heard "Wild For The Night" in the summer of 1997; that song is still tight to this day. An interesting story on this if I may. After a while, I really wanted this album in '97, going into '98, but for some reason, I never got around to hearing it or buying it, and that's probably because I was buying other stuff at the time. (I can't believe I didn't include this in that initial 2012 post, but in February of '98, I went to Target one evening with the intent to purchase this album, however, there was a slight change in plans and I ended up copping EPMD's newly released "Back In Business" instead.) Due to this album being out of print, I had to do a RARE thing and get this used (via Ebay) last year, so talk about something that was YEARS in the making. (This also marks another Flipmode release being covered on the blog. You can go through the archives and check out previous Flipmode posts on Rah Digga, the "Imperial" album and of course the Busta Rhymes project.)

And of course with that being said, let's jump right into Rampage's debut shall we!

1. "Intro"
Produced by DJ Scratch and Rampage
This "3 part" intro leads us RIGHT into.....

Holy shit, talk about one adrenaline laced (Flipmode) posse cut. I've said in previous posts and I'll say it again: when you get any combination of them on a dope ass track, the results were usually tight and that's really the case here, such an energetic way to start this album. Scratch's production was MAD nice, complete with SICK organs (courtesy of the sampled "General Confessional" by the Electric Prunes) over a thumping track. In addition, Ramp opens the song nicely, followed by equally nice verses from Spliff and Serious, but man, Busta and Lord Have Mercy kill this one in true Flipmode fashion. Definitely the best song on this album and one of the most underrated posse cuts you'll ever hear.
*5 out of 5*

3. "Da Night B4 My Shit Drop"
Produced by Rashad Smith

During an "interview," Ramp is answering questions (and rapping), anticipating the release of his album in a very nervous fashion. Speaking of being nervous, if he wasn't actually nervous during this recording session, he did a damn good job giving you the impression of such nervousness here. I'm sure most artists felt/feel all sorts of emotions prior to their debut album dropping on Tuesday (now Fridays).
*3 out of 5*

4. "Talk Of The Town"
Produced by DJ Scratch

"Rampage the talk of the town
The stalker of New York that fucks up the underground!"

Even if Ramp is not lyrically setting the world on fire here, he more than makes up for it by simply handling this beat. Quite the apply titled banger here.
*4 out of 5*

5. "Get The Money And Dip"
Featuring Busta Rhymes
Produced by DJ Scratch

As opposed to the previous song, I can't say this was an apply titled one. The title would suggest something of a story from Ramp and Busta (who's on the hook), but we get some of the usual, nothing more or less.
*3.5 out of 5*

6. "The Set Up"
Produced by Rashad Smith

This is another song that, based on the title, could've been a story, however, Ramp takes an interesting turn. He talks about how things could end for those coming into the hip hop game with a supreme lack of judgment and making the right choices in my view. Good song.
*4 out of 5*

This was the album's first single and it was a DAMN good choice, especially something to get the crowd hyped. As mentioned, this is the song that sold me on this album and I remember going crazy when I first heard it, especially during Busta's hook. Ramp does handle the beat well, coming with a definite "humble" tone throughout.
*5 out of 5*

I didn't care too much for this one honestly, but after listening to it again, as a nod/tribute to Public Enemy's classic "Public Enemy #1," this was decent.
*3 out of 5*


9. "Take It To The Streets"
Featuring Billy Lawrence
Produced by Rashad Smith 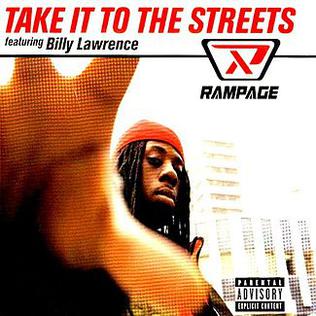 It was clear then (and now) that this song, while very cool, was an obvious attempt at radio and TV play, which may have been somewhat expected as the album's second single. Compared to "Wild For Da Night," this one didn't receive that much attention and with Busta's "Put Your Hands Where My Eyes Can See" blowing up not too long after this, it was a case of bad timing more than anything else. Also, Billy Lawrence did a fine job on the hook. I wonder what happened to her.
*4 out of 5*

The obvious word to describe this song is ambitious. Ramp had plans for the future at this point and this debut was the first stepping stone.
*3 out of 5*

Saying you deserve to go in the hall of fame, on your debut and with Ramp's career circa '97, was a bit ambitious (again) on his part, but on the flipside I get what he was going for here. Decent.
*3 out of 5*

This joint right here (production wise) would suggest something straight out of the James Brown playbook, no question. Serious was, uh, Serious, while Ramp came with a flow like he was back in '94 (not a bad thing). And RIGHT when I typed that last line, Ramp says "about to break two, 1994."
*3 out of 5*


13. "We Getz Down (Remix)"
Produced by Teddy Riley, Co-Produced by Sprague "Doggie" Williams"

Teddy Riley, hot in '97 as 1/4 of Blackstreet, comes through behind the boards (with Sprague) for a Cameo sampled ("She's Strange") song, the last one on the album.
*3 out of 5*


14. "Rampage Outro"
Ramp thanks the fans for listening to the album, along with street DJs, radio retail, "key people," etc, as well as promoting the next Flipmode release, which was Busta's "When Disaster Strikes."

I'll go with 3.5 stars overall for "Scout's Honor..... by Way Of Blood." Ramp stayed in his lane for the most part and came through with a good debut, which hit #15 on the Billboard "Top R&B/Hip-Hop Albums" chart and peaked at #65 on the "Billboard 200." The highlights here are definitely "Flipmode Iz Da Squad," "Wild For Da Night," "Talk Of The Town," and "Take It To The Streets." Unfortunately, this would be Ramp's first and last shot at any type of success in hip hop, and even though he would still come through with the Flipmode Squad and have a notable appearance with Alicia Keys for her "Fallin" remix (which sampled "Wild For Da Night"), he never achieved the same success as his '97 debut, even if it was relatively small compared to Busta. He wouldn't release another solo album until 2006's "Have You Seen," an album I haven't checked out as we speak. Overall, I would give this a recommendation. To this who haven't heard it before, give it a listen and to those who own it but haven't spun it in a long time, revisit it.