Oh man, it's been a good little while since I've done a "revisit" post on the blog. Thanks to unfortunately being snowed in as of this posting, I do have a little time on my hands. The selection here is a rather interesting choice to revisit and honestly I've been planning to do so for a while now, plus I don't think a review has been written about this album, not even in 1998 when it was released. Before we get to the album, a backstory, if I may.

I first heard Lord Tariq back in '96, courtesy of the following:

Needless to say, the "Real Live Shit" remix, also featuring Ghostface Killah, Cappadonna and Killa Sin was pure dopeness (Real Live may be the subject of a revisit at some point too). From there, I would continue to hear songs that featured Tariq, most notably:

And for the record, "No Love Lost" only featured Shaquille O'Neal, Jay-Z and Tariq (Nas was not on this song). At the time, I thought Tariq was pretty good, even as there would be similar MCs in hip hop. Next thing I know, it was early '98, during my 8th grade year in middle school, when "Deja Vu (Uptown Baby)" would hit the airwaves and become one of the memorable anthems that year (more on this song later), as well as this being my first time hearing Peter Gunz. That summer, my cousin Andre let me borrow the CD and I recall liking it a lot, even though it took me quite some time to get my own copy. So, with ALL this being said, how does this album hold up some 18 years later? We shall find out! 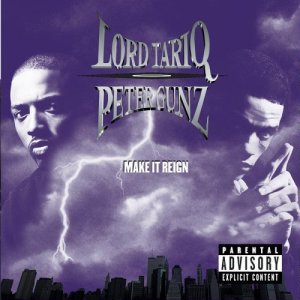 As an opener, this was ok, nothing more. It went for a true dramatic sound, but it missed the mark just a little. In short, Lord Tariq and Peter Gunz have arrived.
*3 out of 5*

2. "We Will Ball"
Produced by Dave Atkinson

Looking back, I remember quite a few songs like this gracing radio and TV in some form in '98. As the second single from the album, this was about what you would expect (check the title), however, it's pretty good (Tariq comes with the ill line "talk jewels like I had my tongue dipped in platinum"). Mr. Atkinson may have came with a party sound tailor made for the dancefloor, but it still bangs without sounding like it tried too hard. Also, the tag team style found here would be a staple on the album at various points and they do a good job with it.
*4 out of 5*

I bet most might've forgotten about this one. It's good, but considering the lineup and title, it could've been much better. I would've rated this a bit higher, but with Kurupt's verse being decent and Sticky ONLY being on the hook, I'll settle with a solid "4 out of 5" rating. (More on the guest appearances later and I'm sorry there's no YouTube link for this, surprisingly.)
*4 out of 5*

4. "Sex, Money, Life, Or Death (Interlude)"
A phone call with Tariq and apparent friend X (not DMX) leads us to this conclusion: the title of this interlude are four things that make the world go round, which leads us to.....

5. "One Life To Live"
Produced by Dave Atkinson

Although the previous interlude had almost nothing to do with this song, it still managed to be the perfect lead-in for it. Over a slammin' Dave Atkinson production, Tariq and Peter focus squarely on a topic that's been covered often in hip hop, alluding to the apply titled nature present. It's about "sex, money, life, or death, you gotta make a choice, right of left." Simple and to the point (nothing we haven't heard before), and while I may be overrating this one, I like it that much.
*5 out of 5*

Interestingly enough, Noreaga would utilize the same Lionel Richie "Fiesta" sample on his debut solo album, "NORE," which dropped the next month after "Make It Reign." Even with the brief vocals by Will Tracks, Tariq does his thing for the ladies on the solo tip. And WHY was this song edited??????
*3 out of 5*

Revisiting this, it's clear to me that this was strictly intended to hit the radio (which it didn't), even down to the forgettable reworking of Michael Jackson's classic "Wanna Be Startin' Somethin". With all due respect, I find it a little hard to believe that Peter was behind the boards here, and with the Chauncey feature and the "remixing" by Teddy Riley leads me to believe that the latter was more of an influence here, just saying.
*2 out of 5*

9. "A Night In The Bronx With Lord & Gunz"
Featuring 1 Accord
Produced by Dave Atkinson

This is another one aimed at the ladies, obviously not on the level of "Fiesta" if you know what I mean. All things considered, this shouldn't have made the album. Let's continue on.
*1 out of 5*

Who Am I? Well, this question is answered throughout the song and that's really all you need to know about it honestly. It's good, nothing more.
*3 out of 5*

"New York to the heart, but got love for all"

And with those opening words from Peter, here we go! This classic right here was one of the anthems of 1998 and it sustained a respectable amount of momentum from the moment it dropped all the way into 1999. Even though this was a true dedication to the Bronx (their hometown), it was SO hot that even in VA we still had to fuck with it, no question! And it was a success, hitting #1 on the Billboard "Hot Rap Singles" chart, #9 on the "Billboard Hot 100" and #6 on the "Canadian Singles" chart, later reaching Platinum status. I would also find out that Steely Dan (the duo sampled "Black Cow" for this) apparently sued production team KNS for copyright infringement without getting permission from those who wrote the song and their publishing company, leading to all of the money made going back Steely Dan. Ouch, and I wonder if that's the reason it hasn't graced radio and TV since. Either way, like I mentioned earlier, to these ears it remains a classic as well as their sole success in hip hop from a mainstream perspective.
*5 out of 5*

Peter clears things up a bit in reference to this song with this clip.

Things come down a bit after the previous classic with this Crusaders sampled song ("Keep That Same Old Feeling"). It seems to build off of "We Will Ball," but it's not nearly as hype (and dope) as that song, even with the "keep on" theme.
*3 out of 5*

A nice and smooth song, perfect for a "two stepping occasion." You can party and move your body all around the world, no doubt.
*4 out of 5*

Aside from this being a tight song, it's notable for the Cam'ron feature, already making a name for himself and preparing to drop his "Confessions Of Fire" debut the month after "Make It Reign."
*4 out of 5*

Most would say that this is the best song on the album, and considering the lineup, who can argue with that? Just about everything with this song works: 4 dope verses from all involved, a nice nod/throwback to another classic in A Tribe Called Quest's "Award Tour" and Ski's sweet sample of Harold Wheeler's "Black Cream." It also continues to confirm how much Pun is missed.
*5 out of 5*

You know what, I wouldn't have included this as an interlude, which I normally never rate. It certainly would've been good enough on its own as an actual song, complete with a Bone Thugs N Harmony type sound. With a few more minutes, this would've been a dope song as a solo showcase for Peter.
*2.5 out of 5*

18. "My Time To Go"
Featuring 1 Accord
Produced by Ron Lawrence

On any other album, this would've been a VERY good closer: words to God.
*4 out of 5*

Instead of "My Time To Go" closing the album, we get this bonus track. It's a joint for the ladies of course, all the way down to the sampling of R. Kelly's "Your Body's Callin."
*2 out of 5*

Let's start with the album itself. Aside from a few missteps here and there, the album is largely very good. Tariq and Peter stay in their lanes for the most part, coming with highly decent lyrics over mostly solid production. Also, with the exception of the Chauncey Black feature on "Startin' Somethin," the features were very well placed, as each major guest were either active in '98 and/or had an album on the way. It goes without saying that "Deja Vu (Uptown Baby)" was the driving force behind this album, propelling it to Platinum status. 3.5 stars for "Make It Reign."

After the success of the "Deja Vu" single, that was essentially it for them, as confirmed by Peter, leading to the dreaded "one-hit wonder" label. I can see why both men stepped away from the scene, but at the same time, with hindsight being 20/20, I feel they likely had another good album up their sleeves, with 1999 or 2000 being the best two years to drop it, but it never happened and honestly it's long past the point of them releasing a sophomore album at this point. I'm not sure what Tariq is up to these days, but Peter has been part of the "Love & Hip Hop" reality show since 2013.

Even if their careers didn't turn out the way they initially hoped, I still have mad love and respect for what they gave hip hop in 1998. Salute!!!!!
Posted by Wayne M. at Saturday, January 23, 2016