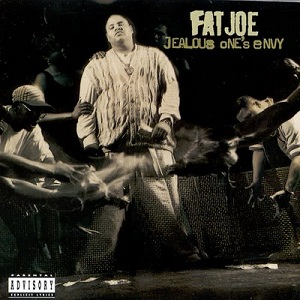 
[Before I get started, I just want to say that towards the end of '95, I couldn't wait to get my hands on this album. As it turns out, my dad, who initially turned me on to hip hop and was slowly but surely no longer being a fan of the genre, let me have this cassette. Trust me when I say this joint was in heavy rotation. I kept it for a while until I copped the CD months later.]

I've always felt this was quite a dope opener and 20 years later, it still is. Joe and KRS come with such an aggressive style over an equally dope, Diamond D production, featuring ill samples thanks to Sammy Nestico's "Shoreline Drive," Jeru The Damaja's "Come Clean" and Kool G Rap & DJ Polo's "Ill Street Blues."
*5 out of 5*

This hook perfectly defines this song, the album's first single. Even at this point in 9'5, once you've heard a song like this, you've heard them all, but like I always say, if it's done right, it usually results in something good. Does Joe succeed here (pun intended)? Yes indeed.
*4 out of 5*

To start, mad props to L.E.S. for the way he utilized Marvin Gaye's classic "Sexual Healing" for the beat. In addition, although Joe starts this one by saying "this goes out to all my peeps locked down...... all my peeps who passed away," the song focuses more on the (d)evils of jealousy and envy in the streets and the desire to keep it going in the face of it all. Very good song, and whoever the lady was on the hook was never credited, but it does sound a bit like Miss Jones.
*4 out of 5*

4. "Gangbanging interlude"
An audio clip from the movie "The Warriors."

"Muthafuckers know my rep, I never fronted/Niggas be talkin' mad shit, but they don't want it"

Joe's in town and here to stay, by any and all means necessary, nothing more or less. DJ Doo Wop, also making a name for himself at this point with his highly dope mixtapes, shows up for the hook.
*4 out of 5*

"Many thought it couldn't happen, Joe was never rappin'/He was always gettin' loot off the crack and/Fuckin' wit them heavyweights, who had shit sewn in every state/The very sight'll make the average man defecate/Livin' the life of stock, bonds and cars, word bond/When I be gone I'll be worshipped like Nicky Barnes/It's on, you don't want no confrontation/Killer communication, and suffer from multiple lacerations"

Joe would use the same bars above for an ill freestyle with himself and the late Big Pun on Funkmaster Flex's "Volume 1" mixtape in '95, and it was effective in both spots. This dope song could be viewed as "Flow Joe 2" and it's surpasses its predecessor in a big way. Domingo's use of Barry White's "Love Serenade" was pretty good.
*5 out of 5*

Over an unmistakable Preemo production, Joe comes with what may arguably be his best song ever. Over the course of three verses, Joe goes in (honest) detail about doing what it took to survive, from his teen years all the way up to making it in the rap game. Again, songs like this were almost commonplace in hip hop circa '95, but it wasn't a cliche as of yet. Great stuff here.
*5 out of 5*

9. "Fat Joe's Way"
With the classic Godfather theme in the background, Joe comes with some words, Spanish style.

Oh man, this joint goes so hard. The way Joe Fatal mixes a thumping beat with a sample courtesy of The Electric Prunes' "Holy Are You" is nothing short of amazing. This apply titled banger would've been an automatic "5 out of 5," but since Wu-Tang's own Raekwon was ONLY on the hook, I'm deducting a few points for that. Imagine Rae closing this song with a verse. Man.
*4.5 out of 5*


"I doom the world like I was God and throw my gun away/Then snatch the moon out the sky, and blow the sun away" -Pun

Although this was a showcase for the guests, this was more notable for being Pun's actual debut and of course his verse was the show stealer.
*4 out of 5*

"Business chatter's over shrimp and lobster platters/At Jimmy's Cafe, a glass of Peirier/Chick go for celly book a room at the Holiday/Inn, so I can get her and a friend/Menage a trois livin' the life of a star/Overweight overpaid, pockets bussin' out the seams/While you suckers havin' limousine dreams/I got you all sized up, niggas wise up/A fat meat truck'll be pickin' all you guys up"

Joe would also use the bars above on that same freestyle with Pun mentioned earlier. This song, while decent, was not that much different from "Fat Joe's In Town." And speaking of that freestyle, allow me to do something a little different and post it below ("Say Word" ---> "3 out of 5")

I RARELY say this when it comes to a Preemo production, but in the case of this remix, even with the same lyrics, the original was better, but not in a blowout.
*4 out of 5*

In a very nice touch, Joe comes with a true dedication for hip hop from the heart, including acknowledging those who paved the way for artists like him and others doing their thing in '95. Thumbs up for a very good use of Tyrone Davis' "In the Mood." Names mentioned were:

This appropriately titled joint concludes the album in the same way it started: it's all about the Bronx. Joe Fatal came through with another dope beat, with creative scratching (BDP's "The Bridge Is Over") and a tight sample courtesy of David Axelrod's "Holy Thursday."
*4 out of 5*

This, loyal reader, is by far Fat Joe's best album ever. Lyrically he fired on all cylinders (with top notch production to match) and quite frankly, he was at his best here on the mic. The album was a success, peaking at #7 on Billboard's "Top R&B/Hip-Hop Albums" chart and was selected as one of The Source magazine's best albums of 1995. Highly recommended and if you ever want to hear Joe in his prime over dope production, this is it. 4.5 stars.