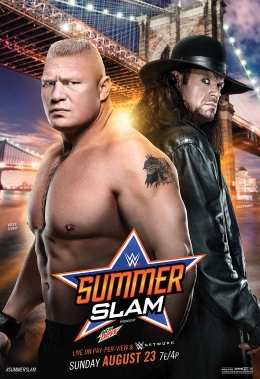 Oh man, it's certainly been a while since I've done an "off topic" post on the WWE. In fact, I think the last one I might've done was for Wrestlemania 30. Long time huh, lol? Well, continuing on, this year's Summerslam will take place tomorrow night (as of this post) at 7:00PM (Eastern time), from the Barclays Center in Brooklyn, New York, with a 6:00 preshow scheduled, making this 5 hour extravaganza. I'll be watching on the WWE Network, and with this being said, here's the card along with my predictions.

I'm pretty sure this match is not opening the show and I simply do not care about it one bit, so why not get my thoughts out the way on this one right, lol? Before I get to who I feel will win, I have a few words on Stardust and King Barrett, starting with the former. I've always liked Cody Rhodes (that's what I refer to him as) and always thought he was quite the underrated wrestler. Looking back, it would've been interesting had he won the "Money In The Bank" briefcase in 2013 instead of Damian Sandow, but then again, he probably would've met the same fate as Sandow did (albeit in a losing effort). I personally felt that after the passing of his father, Dusty Rhodes, the next time he appeared on TV, he should've all but dumped the Stardust gimmick and in the name of Dusty, went back to Cody Rhodes and continued from there, but apparently that's not the case. Now, if he's all for this gimmick and wants it to work, I respect him for it at the end of the day. King Barrett, my how the mighty have fallen. I remember a point last year when Barrett was one of the most over characters in the company, seemingly on the verge of a big push..... then he got injured. Since his return, he's been mostly on a losing streak and is right back in career limbo. I feel that the reason for his booking the last few months is solely due to that injury from last year and said booking is his "punishment", if you will, even though those sorts of things can happen to anyone. As for the match itself, the win goes to Neville & Stephen Armell.
Predicted rating: *1/2

I like some of the women in this match based on their talents in the ring (specifically Sasha, Charlotte, Becky and Paige), however, this match will likely be viewed as the "cool down" match, even with the participants involved. I'm going with Team PCB for the win.
Predicted rating: **

Fatal 4-Way match for the WWE Tag Team titles
The Prime Time Players vs. The New Day vs. The Lucha Dragons vs. Los Matadores

I won't be surprised if this match opens the show. Even at this point, I'm surprised that the New Day have managed to get over, all things considered (as heels), and speaking of them, they are my pick to win this match and regain the tag team titles (Lucha Dragons and Los Matadores have no chance and I feel the Prime Time Players' reign has come to an end).
*Predicted rating: ***

Triple Threat match for the WWE Intercontinental title
Ryback vs. The Big Show vs. The Miz

My pick is for Ryback to retain in what will probably be an ok match, nothing more. Big Show doesn't need a title at this point in his career and Miz clearly doesn't need it either.
*Predicted rating: **

Wow, what a difference a year makes. One year ago around this time, Rusev was protected and one of the hottest heels in the company. Now he seems like just another guy ever since the lost to Cena at Wrestlemania 31. Logic would likely dictate that Ziggler goes over here, but I'm going with Rusev to pick up the win, along with Lana turning on Ziggler during the post match activities and reuniting with Rusev.
*Predicted rating: **1/2

I'm not really interested in this match. Luke Harper is decent, Bray Wyatt hasn't quite won me over as of yet, I'm not a Roman Reigns fan and Dean Ambrose is decent here and there. Reigns and Ambrose will pick up the win, complete with an Ambrose heel turn at the end of the match.
*Predicted rating: **

Even though the booking of these two men leaves a lot to be desired in most cases, this should be a great match and possibly the show stealer. Both men deserve a win here, but if I have to pick a victor, I'll go with Cesaro, but not in a blowout.
*Predicted rating: ****

Although we have seen it multiple times, this match should be decent if nothing else. I've always liked Randy Orton, but I expect nothing different from him in this match. Sheamus, on the other hand, will be Sheamus, plus winning the MITB briefcase has done him no favors whatsoever (more on this later). Orton is my pick to win, but if Sheamus wins, expect another rematch next month at the Night of Champions.
*Predicted rating: ***1/2

Winner Takes All match for the WWE and United States titles
John Cena vs. Seth Rollins

A word on John Cena if I may. Much like Orton, I've always been a fan of Cena (definitely not a "Cena hater"). Granted, there are times when he can overstay his welcome, but he works his ass off and usually has good to great matches (thus far he's my pick for "Wrestler of the year"). These two have wrestled before, usually on RAW, but on this (PPV) stage, I'm expecting them to go all out and produce a great match as a result. Seth has been ok as champion, but that's really all I can say about his reign. WWE has booked themselves into a corner here and anything other than a clean finish will be disappointing to these eyes, so with that said, I'm going for Cena to win after a hard fought match. I know there's the MITB factor, but I'm NOT expecting a Sheamus cash in.
*Predicted rating: ****1/2

The Undertaker vs. Brock Lesnar

And here we have the main event, the "Wrestlemania 30 rematch". Business decision or not, Taker's Mania streak should NOT have ended, but that's another story. The buildup to this match has been good for the most part and considering their WM30 match, expectations are considerably high for these two to deliver a match to remember and I feel they'll do that. Now, for obvious reasons, Brock will not be suplexing Taker all over the place, neither do I expect Taker to be busting out planchas or any high risk moves at this point in his career, which is winding down. I don't think neither man will be hurt by a loss, and I all but look for Taker to get his win back from WM30. (And check this out, here's an additional prediction of mine. After the match ends, Brock and Heyman leave for the locker room. As Taker is still in the ring either posing or selling from the match, the lights go out, we hear music, Sting appears and has the long awaited face to face with Taker to close the show, setting up their WM32 match.)
*Predicted rating: ****

And there you have it, my Summerslam 2015 predictions. On paper it looks very good and it should be an enjoyable show. I hope to see the "important" matches get a respectable amount of time. On the other hand, I don't want to see HHH or Stephanie McMahon at all during this show (let the wrestlers do their thing for once). Does it have the potential to be one of the best Summerslams ever? It does and we shall see what happens!!!
Posted by Wayne M. at Saturday, August 22, 2015