Ghostface Killah has been quite the busy man over the last 9 months or so, as evident by the release of the criminally slept on Wu-Tang album, "A Better Tomorrow" and his own "36 Seasons," both released in December of 2014. Next up was the release of his joint album with BadBadNotGood, a jazz instrumental hip hop band based out of Canada. I initially checked this out via a SoundCloud stream a few days before it dropped, then ordered it several days later on undergroundhiphop.com. I also recently said I would revisit this, and that's exactly what happened today, necessitating this review. 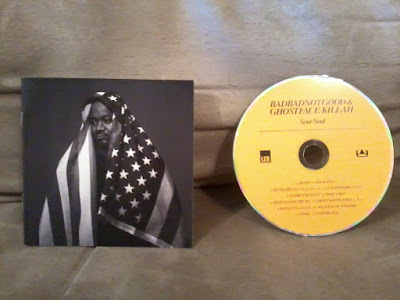 
All songs produced by BadBadNotGood

1. "Mono"
This "Sour Soul" instrumental begins the album in a 59 second fashion, the first of three.

It was only fitting that the title track was the first actual song on the album, and of course Ghost's tells you exactly what "Sour Soul" is. He also mentions "food for thought" at various points throughout the album, including this song. It seemingly ends just as you're getting into it, but other than that it's good stuff.
*4 out of 5*

I honestly can't say that I'm a fan of Danny Brown's work, but man he fit decently enough with Ghost on this one (not quite stealing the show though).
*4 out of 5*

Complete with well placed guitar licks and strings, Ghost and Elzhi go in on this one from start to finish. This is what I would call "lyrical gunshowers." Dope stuff here.
*4 out of 5*

Lol, vintage Ghostface right here, especially when the ladies are involved.
*3 out of 5*

Ghost was in full Tony Starks mode for this one, "livin' for vengeance wit emotional details."
*4 out of 5*

"Street knowledge, we puttin' these books to the test!" -Ghostface

That one line accurately describes this song, and just when you think Ghostface is going to deliver more of the same about a topic that's been covered SO many times in hip hop, he comes with his own perspective, continuous food for thought.
*4 out of 5*

One thing this DOPE song did is just make me continue to anticipate that "DOOM-STARKS" project. Man can we please get that at some point??? Another thing I really like about this song is the 70s, blaxploitation styled production during the first part before the beat switches at the end of the song.
*4 out of 5*

Clocking in at 2:11, this joint is brief, but still very good for what it is. There is some wisdom found here, GFK style.
*4 out of 5*

This was a damn good continuation of "Nuggets Of Wisdom" if you ask me.
*4 out of 5*

12. "Experience"
The third "Sour Soul" instrumental closes the album. This may have been the best of the three, because it put me right into a 70s blaxploitation flick, and I could envision it opening or closing one of those classic flicks I still watch today.

"Sour Soul" may be the most fast paced album in Ghostface's discography, but that's certainly no knock against it. This is a very good album overall, and I still feel the same about it as I did when I listened to it on the stream back in February. Lyrically, Ghostface may not be breaking new ground, but he still has something to say in true GFK fashion (never boring) and he flows like fine wine over the soulful production of BadBadNotGood. I would have no problem with them doing a sequel, yes indeed. 4 stars for "Sour Soul."