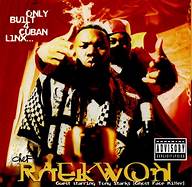 
All songs produced by The RZA

To this day I'm not sure why ODB was not part of this album. I still often think about which song would've been best suited for him. Also, there were two firsts: 1) This album marked the first guest appearance by a non Wu-Tang artist in the form of Nas, and 2) Wu-Tang were also the first artists to utilize and popularize the use of aliases in hip hop, and of course it was copied afterwards. Quite a bit of history going into this landmark album.

Personal facts
*My friend Andre bought the tape around the time it was released, and he supplied with a dubbed version. Even though I paid him $1.00, it didn't come out the way I wanted it to, quality wise.
*I owned the actual "purple tape," as well as the "clear version" also.
*I owned 3 versions of the CD, and yes, the one I own today remains in excellent condition I must say.

1. "Striving For Perfection"
This intro sets the tone for the album, as Rae and Ghost are pondering their lives at the time and how they want to proceed in their future. Although they clearly know what type of life they're involved in, they want out in the worst way almost. As later mentioned by Ghost, "it's about money, hoes, designer clothes, and shows," as well as an unpredictable life of crime and drugs. This intro serves as quite the storyline for all involved, a hip hop crime/mafioso saga to the fullest.

After the memorable intro, we head right into our first banger, detailing everything about why these guys are "knuckleheadz" in true Wu fashion! Ghost says "congratulations Chef, let's celebrate and sniff an 8."
*5 out of 5* Yes indeed, another classic banger here! Rae and Ghost's chemistry, among the best in hip hop history, is taken up several notches and the end result is rather impressive. Ghost's verse is pure fire and Rae ends it on a high note.
*5 out of 5*

I'm not sure why it took me so long to know what (and who) Rae was referring to when he said "peace to incarcerated scarfaces"; it didn't hit me until a few years down the road surprisingly. In any event, this is another classic (yes it's a banger too), with Rae continuing to drop colorful gems over a slammin' RZA beat. Man! *5 out of 5*

Whenever I'm asked what my favorite song on this album is, this apply titled classic is usually the first one I mention. Rainy days, we all have them, literally and figuratively, but it's all about maintaining and staying strong throughout ("waitin' on these royalties takes too long/it's like waitin' on babies/it makes me want to slay thee," says Ghost).
*5 out of 5*

Pure WU dopeness personified, as Deck starts this off PROPER and KILLS it completely (he certainly knows how to deliver an opening verse), with Rae, Ghost, and GZA not far behind at all.
*5 out of 5*


8. "Can It Be All So Simple (Remix)"
Featuring Ghostface Killah

This tight remix builds largely on the strength of the original (which is also a classic). With everything that's taking place, you just have to ask yourself that one question, "can it be all so simple?"
*5 out of 5*

9. "Shark Niggas (Biters)"
This is a rather famous skit, so I have to talk about it. In short, Rae and Ghost call out those who were biting in hip hop at the time. Specifically, although not mentioned by name, they call out The Notorious BIG for copying Nas' "Illmatic" idea, as in using the child photo for the album cover (Nas did start this). Ghost's tone was more competitive rather than malicious. Overall, the skit made two things perfectly clear:

1) DON'T bite or sound like Ghost or anyone from the Clan
2) In the words of Ghost, "keep it real, getcha own shit man, and BE ORIGINAL!"

We get one of the first introductions to Cappadonna (then known as Cappachino), as well as a memorable opening verse from Ghost ("check out the rap kingpin, the black Jesus!"). Continuous dopeness.
*5 out of 5*

To start this we get the funny skit with Ghost talking about the Wallybee Clark shoe (which he made famous) along with a slew of designs he was going to create that summer! ("I'm gon rock niggas this summer, on the real!") From there, we head right into this incredible track, and I've always loved how Rae starts this off as the beat drops ("check it, yo, yo, yo, yo, stand on the block/Bebop, gun cock/Avalanche rock...")
*5 out of 5*

Oh my, what more can be said about this classic?! Nas BLESSES this with one of the best verses of all time, certainly one of his best, and for the first guest spot from a non Wu artist, he DIDN'T disappoint. All 3 MCs drop jewels here and it's one of my favorite collaborations.
*5 out of 5*

Ghost got a solo spot on this album, and when it came to the ladies, well, you knew what to expect. This song may have been meant for laughs, but I'm sure he meant every word he said!
*4 out of 5*

I read several years ago that Rae was not a fan of this beat. Not sure why, it's pretty good to me. This sounded like something straight out of Kool G Rap's playbook. We get some fine storytelling from Rae, something he would come to be known for.
*5 out of 5* Who said the Wu didn't love the ladies?! This classic was one of the best songs of 1995 featuring largely dope verses from all involved (Rae's verse still has me scratching my head at times, lol) and a memorable hook from Meth.
*5 out of 5*

Under their familiar aliases, all 5 MCs bless this tight RZA production, basically leaving you wanting more.
*5 out of 5*

"What do you believe in, heaven or hell
You don't believe in heaven cause we're livin' in hell!" Well, those two lines can certainly be applied to today's world in certain ways. Rae and Ghost do an effective job painting the verbal picture of "the life", good and bad.
*5 out of 5*


*18. "North Star (Jewels)"
If you bought the CD, this closer was a bonus track. It should've been on the cassette too, because it was a great way to close the album. Before and after Rae's verse, we get some words of wisdom from Popa Wu.
*5 out of 5*


This is one of many albums that I've owned since its initial release, and it's SO timeless. This is such a cinematic masterpiece on all levels. Rae and Ghost, along with the rest of the Wu members (except ODB-RIP), essentially delivered in spades on the mic, and The RZA made what is possibly the best produced album ever. It's a classic in every sense of the word.