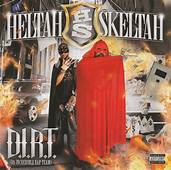 "This ain't crunk, not hyphy, not snap/Not screw(ed), not pop, not quite boom bap/It's rugga, SMACK MUZIK, bang ya head music/Niggas wit WMD bang ya lead to it!" -Rock


12 years after their 1996 debut, "Nocturnal" and 10 years after the second album, "Magnum Force," Rock and Sean Price (aka Ruck) returned with a vengeance and this intro sets THE right tone for what's to come (these guys KNEW how to start an album). In a nicely dope touch, Rock essentially (briefly) previews whats to come on the album, dropping a few of the names of the songs that'll be touched on during this post, which will be a "quote heavy" one I can tell you that. I normally don't rate "intros," but this cops a "4 out of 5" from me. This is a great lead into.....

2. "Everything Is Heltah Skeltah"
Produced by ILL MIND

"Dirty Harry gun, the 4-4 clap strong/Put a hole in you and your bullshit rap song" -Sean

"Bang, patience ain't only a virtue/That's you and your man's at the hospital, I will hurt you" -Rock

"You beefin', but you vegan when it's about to cook/Time to ride, yo bitch ass in the mirror like, how I look" -Rock


This apply titled, fast paced banger (and trust me there are a lot of those on this album) is dope yet simple: no matter how things may look, it all comes back to Heltah Skeltah! I also caught Rock's line in that "some rappers be embarrassed to say they rappers, proud to say they sell crack though." Sad but true.
*5 out of 5*

"These niggas can't write, plus they pants tight/And they sweaters small, fuck it I'm betta y'all" -Sean

"Smile, it's a celebration bitches, I just came back/Mistletoe in my back pocket, kiss my ass!/All y'all, can we do a track? No, quit hollerin', I'm shittin'/Niggas trash, a wack-tose intolerant" -Rock

"Fuck rap riddles, get riddles with shells, yo/I'm a beast, you a bitch like Tickle Me Elmo" -Sean

"Listen, it's big drama, nah, it's lil drama/Lip gloss stains on my dick from Lil Mama/When I fuck Rihanna, ain't use no umbrella/When the bitch have twins we naming em both Ella, Ella/Aye, I'm just joking, maybe I'm not/I'm just smokin', maybe it's pot/Maybe it's coke, maybe it's both/Only way to tell, muthafucka, hah, take it and toke, P!" -Sean

"....That's the way it is, I'm a slim thug, slim and shady/But I'm not from Houston, not that White boy from Dre team" -Rock


Man, the lyrical heat these guys come with on this one, tag team style, is nothing short of pure dopeness. I also liked how they showed no love to how wack things were starting to get in hip hop, plus the following hook accurately describes this song in a compete nutshell:

"Listen, fuck a hip hop, I'll take ya wrist watch/Put the gun to your tongue and make you lick shots" -Rock

"I'm like that's not a gun, this is a gun, we?/Who wanna rumble with me ol' Rockadile Dundee/I rule the underground, I'm Pimp C, Bun B/Lord Jazz Do-It-All and Mr. Funkee" -Rock

"This Puerto Rican bitch called me papi chulo, but I'm/Not with the gwala shit, fill the hollow tip in the nine, I'm/Nice with a nine, I'm nice with the rhyme/52 block your snot box, Mike in his prime/Line for line, top five dead or alive/Two of them dead, and soon as the other three die, I'm number one! -Sean

Man, these guys had bars for days let me tell you. Needless to say, they all but go in and murder this track. TIGHT, fast paced shit here.
*4 out of 5*

"Yo listen, bang on your force, y'all niggas can't hang wit a boss/Jesus the name, no I'm not the lame on the cross"

You know, a line like this would be very controversial to some, but I forgive it, mainly because P was just SO raw with it that he probably didn't care at this point. (Besides, I don't think P was calling Jesus Christ "lame.")

"Yo, knife in my right, the sket on the left/Put the gun to your head and the Gillette to your neck" -Sean


They may not be "blood brothers," but the bond is so tight and the chemistry is so amazing that they might as well be brothers. The rugged aggression in this song is on point.
*4 out of 5*

"Yo, son, let these niggas know, the ruler's back, nigga, stop stop lying/Wit goons and lots of iron, I pop shots flyin'" -Rock

"Me, I'm such a don, I'm Don Rocko/Ain't gotta lift a finger, they say you the God, watch holmes" -Rock

"Fuck outta here, you so sub par, you sub leasing/Subway sandwich eating, sucker type, sucking your teeth/I substitute the subliminal shots/With some shit that sound like a sub woofer when it go RAH RAH!" -Rock

"Yo, right now, I'm in the I don't give a fuck mood/Fuck you, courtesy of Ravishing Ruck Rude" -Sean

"Pay attention to my sobriety/One drink and I'm thinkin' like Menace II Society/Spray that nigga, A-Wax nigga/Getaway clean, Al Green eight-track nigga/So so flows and bozo hoes/I kill 'em all for free like a promo show/My flow is so cold, ho blow ya nose/Soul in the hole, you bowling, catch a hole in your sole, bong!" -Sean

"Ill, I ain't the nigga you owing dope, pay him his ones/I'm Count Rockula, take it in blood/Nigga I'm so dirty, huh, rest in peace to Ol' Dirty/Niggas can't cheat me, but your ho can jerk me" -Rock


The title and the DOPE lyrics, complete with extreme wordplay, tells you ALL you need to know about this BANGER.
*5 out of 5*

"It's Mr. Monster Mad Rocko/Oscar the Grouch, hop up out the garbage can and pop toast/Reincarnate your ass wit the rugers/Michael J. Fox clap ya stupid ass 'back to the future'/You ahead of your time, huh, huh, watch how you talkin'/To grown folks, I don't throw fits, I throw folks" -Rock


Over a tight ILL MIND production with some haunting organs throughout, all four MCs come with the tuffness, indeed. They show you in more ways than one why they're "so damn tuff," with the hands.
*4 out of 5*

"So I remain a spazmatic, a gat addict/Who won't battle you, but I will take a bat to you!" -Rock

"Stupid, in the crazy house I'm the land lord/The owner, tenant, the janitor, I mop the damn floors" -Rock


Lyrically, Rock and Sean did come insane here and it's remains raw as hell and incredibly dope. And in a nice bit of continuity, Rock even admits that the "therapy" from '96, and the therapist himself, were of no help, lol, cause we're getting a song like this, lol!
*5 out of 5*

Oh man, over a gunshot laden, tight beat provided by M-Phazes, Rock, Sean, Tek and Steele come with some of the rawest, lyrical gunplay you'll ever hear on this appropriately titled banger (so many quotables here). Speaking of Tek and Steele, the way they stepped up their aggression here was not unnoticed.
*5 out of 5*


10. "That's Incredible"
Produced by Double Up

"A lotta muthafuckas get in the booth/Start talkin' bout shit that they shouldn't like snitchin' is cute/These rap niggas get on my nerve/I'm bout to slap niggas up, Rock, give me the word (get 'em!)" -Sean


Like this entire album, lyrically this joint is incredible, so it's definitely apply titled in that regard. Also, as a long time wrestling fan, I immediately noticed that they rapped over the theme of WWE's "Goldust" and in my view, they're probably the only MCs who could rap over a theme like that and STILL make it gritty. Impressive.
*4 out of 5*

"Dress warm in the summer time, that's just heat on my waist/Careful, you open the over door, it'll be heat in your face" -Rock

Featured guests The Representativz (Supreme and Lidu Rock) were not left in total dust trying to keep up with the ruff, aggressive style of Rock and Sean. ANOTHER dope song here.
*4 out of 5*

"None of you wanna dance wit the devil, save me the last dance/Been a gat man since Marques Houston was Batman/You Della Reese, get smacked wit a top of a trash can/ I'm quick, nah, bitch, not quick like ya last mans" -Rock

"Yo, peep the food for thought, if food were thoughts/I'd be Lean Cuisine, you Mushu Pork" -Sean


If you can't stand the (lyrical) heat, I suggest you stay outta this BCC kitchen that's for sure.
*5 out of 5*

This 3:09 banger was full of quotable lines (what else is new on this album right) and in the interest of time I didn't want to quote the entire song. This tightness continues as we head to the last song on the album.
*5 out of 5*

"I poke a nose (Poconos) wit a icepick, fuck the Resort/Resort to violence and not them little fuckin' guitars" -Rock

"Hold on, if I said ya name, it's probably not an attack/Probably not, but it's probably a fact, probably/You probably wack, probably crack, probably just that yo shit/Rhyme wit raps, plus I can do that/Die to you fags, now you sayin I'm gay bashin'/Ain't talkin' to them, I'm talkin' to you, when I scream faggots/You lame asses, gon' hate and bring Gladd in this/In more ways than one, ain't that a bitch?!" -Rock


I guess some good things must come to an end huh? Well needless to say, this rock infused banger closes the album on a highly dope note, which also finds them shouting out the fans in a nice touch.
*4 out of 5*

I remember buying this one a little late, which would've been early 2010 from Best Buy along with Wu-Tang's "Chamber Music," another dope album by the way. Other than that, THIS third album from Heltah Skeltah is simply incredible (pun intended) from top to bottom. If you want a prime example of strong lyricism over some dope production along with great chemistry to match, this is THE album for you. Rock and Sean Price were ON from beginning to end, and looking back, it's a shame that this album didn't make too many "Best Albums of 2008" lists (that I have seen) and it was highly slept on in the process. Their second album, "Magnum Force," was good, but "D.I.R.T. (Da Incredible Rap Team)" literally blows that album out of the water, and it certainly gives "Nocturnal" a run for its money, especially on a lyrical level. Speaking of the lyrics, I have to go back to that. Bar for bar, line for line, not too many cats can see Rock and Sean P on the mic and this album is a clear testament as to why. If I'm overhyping it, I admittedly am because that's how DOPE this album is, no question. I would also give this album 5 stars for the lyrics alone, but, objectively it clocks in at a STRONG 4.5 star rating (and trust me, I WANT to give this 5 stars). Loyal reader, if you haven't heard this already, GET ON THIS ONE ASAP and add it to your collection, you won't be disappointed. Rock and Sean P, MAD love, props, and respect for this and I sincerely hope we get album number four at some point!!
Posted by Wayne M. at Monday, February 09, 2015