Wu-Tang Clan's "A Better Tomorrow": The End of an Era?

[Note: I took advantage of the stream that was released on November 28th.]

Well, after all the delays, interviews, promises, disputes, and hype (or lack thereof), we have finally arrived at the somewhat long awaited 6th album from the Wu-Tang Clan, "A Better Tomorrow." Although it hasn't been hyped as such, this appears to be the last Wu-Tang album, which would be a sad day for me personally because I've been a fan of the crew since '93, plus they're my favorite hip hop group of all time. Their most recent album, the hugely disappointing "8 Diagrams," left a bad taste in a lot of fans' mouths, and I did say during my revisit of that album that in no way it should be their last. There's a good number of questions I have going into this album, one being "will this be better than 8 Diagrams?" With all this being said, let's jump right into it. (I also find it interesting that Ghostface will be dropping his next album, "36 Seasons," the week after this release, and this same thing happened in 2007 when Ghost's "The Big Doe Rehab" came out a week after "8 Diagrams.") 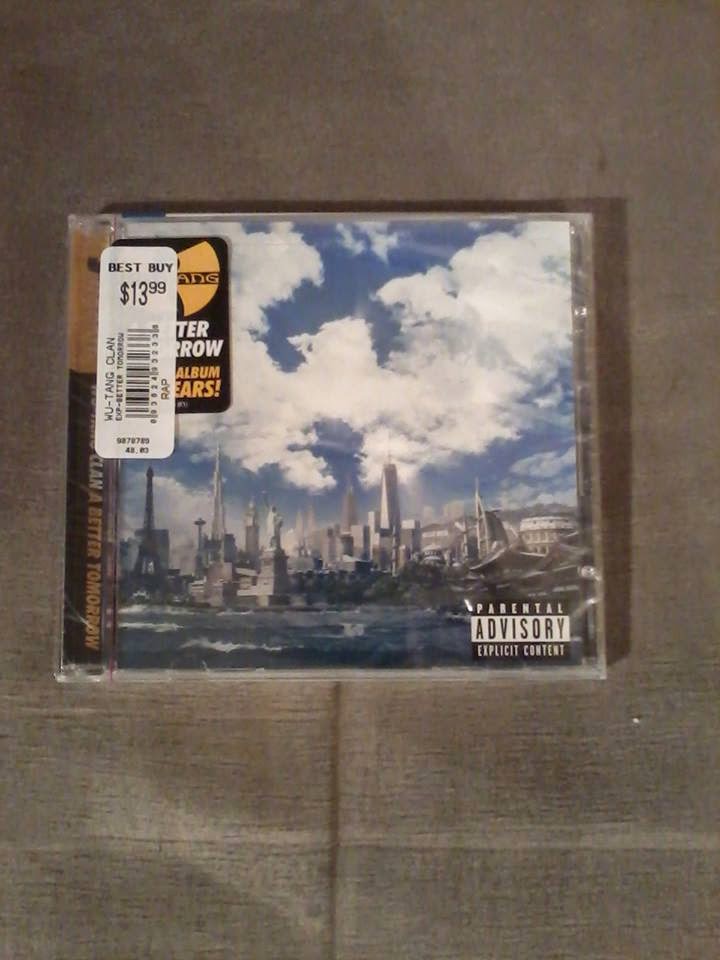 
1. "Ruckus In B Minor"
Produced By The RZA and Rick Rubin

This was a dope opener, featuring some classic audio clips from the late Ol Dirty Bastard in a nice touch. All involved seemed to be motivated throughout and it was a very good choice for the opener.
*5 out of 5*

The word "felt" is on full display with this one. It was ok, but RZA's beat was a little too experimental to these ears.
*3 out of 5*

I fully get and respect the uplifting/motivational tone of this song, but it just really came off as different, (still decent overall). Cappa's off beat verse certainly didn't help matters either.
*3 out of 5*

A dope, appropriately titled joint right here, featuring a show stealing verse by Meth. I also liked how RZA switched the beat up for each verse. Creatively dope song.
*4 out of 5*

5. "Hold the Heater"
Cappadonna, U-God, The RZA, GZA, and Method Man
Produced By The RZA

I really like this one right here, also feeling a throwback vibe too. At first, very early on, it seemed like it was going to be a slow start, but it didn't take long for the pace to pick up from Cappa's opening verse to Meth's closing verse. Dope all around and it would've been better if all the members were present.
*4 out of 5*

6. "Crushed Egos"
Raekwon and The RZA
Produced By Adrian Younge

ANOTHER fast paced banger. I'm not sure why Ghostface wasn't on this one because he would've added so much more, especially on an Adrian Younge track.
*4 out of 5*

Hot damn, the bangers continue. Over a dope Mathematics track, we get equally dope verses from Meth, Deck, and GZA; Cappa comes with one of the best verses I've heard from him in a long time.
*4 out of 5*

I consider this to be a song with interrelated stories if you will. Rae, Deck, and Masta are seemingly on the same topic with a story right out of the "OB4CL" playbook, while Ghostface came through with a verse reflecting where the world is today.
*4 out of 5*

I guess it didn't take us long to get a song for the ladies now did it. It's all good though, because it's not your typical, cliched "chick track",. It follows all four members as they talk about their individual experiences with daughters of preachers. I also liked the horns here as well as the instrumental riding out the song, something that used to be done a lot back in the day and not really done anymore these days.
*3.5 out of 5*

10. "Pioneer the Frontier"
The RZA, U-God, Inspectah Deck, and Masta Killa
Produced By The RZA

This one was slow and all over the place in terms of the production.
*3 out of 5*

The dark sound really adds to the dope nature of this song. The four MCs are not just talking about a "necklace" in general, but they dissect it's meaning, purpose, and their treatment of said jewelry. More creative points are scored for this one.
*4 out of 5*

I'm not sure why they titled this one "Ron O'Neal," because it obviously has no connection to the late actor who famously starred in the Blaxploitation classic "Superfly." Another dope song here.
*4 out of 5*

This is another song that would've benefited more if all members were present, but it's still an excellent song, with a nice, memorable Teddy Pendergrass sample, probably one of the most positive songs I've heard in quite some time, focusing on where we are in the world today and what we need to do to change things going forward, and make no mistake about it, there are many things that need to be changed in order to make this world, specifically our country, a better place for the next generation.
*5 out of 5*

The positivity continues here with this apply titled song, another excellent one. You can almost take what I said about the previous song and apply it here. Great stuff.
*5 out of 5*

Oh man, I was almost in tears listening to this nostalgic, soulful closing, especially with it's O'Jays' "Family Reunion" sample. Again, all the members should've been on this one too, but the song is so good that I can let that slide, and if this is the final Wu-Tang Clan album, this song (and album) sadly marks the end of an era, smh+facepalm.
*5 out of 5*

Man, as a long time Wu-Tang fan, this album more than exceeded my expectations. Lyrically everyone brought their usual, but still dope in clear Wu-Tang form. The production all around was TONS better than what we got on "8 Diagrams," especially RZA's contributions. I also feel the spirit of ODB was looking down and each time there was one of his clips, you FELT it. Now, how does this measure up to the previous Wu albums? Well, let's take a look.

In NO way does this album come anywhere close to "Enter The Wu-Tang (36 Chambers)" and "Wu-Tang Forever" obviously; it does give 2000's "The W" a run for its money, but I'll give a VERY slight edge to "The W" on this one, and now when I think about it, this may change. I know 2001's "Iron Flag" has "Uzi (Pinky Ring)" and "Y'all Been Warned," but I do like this new album a little more than that 2001 effort. And it goes without saying that this album BLOWS "8 Diagrams" COMPLETELY out of the water on ALL levels. I mean, there's NO comparison to be made on that one.

Overall, this was a GREAT album and again, if this is the last Wu-Tang Clan album, they went out on a tremendous note and if it doesn't hit people now, it will certainly do so in time, I can guarantee you that. (And the CD will be part of my collection by the time you read this.) Long time fans should be happy with this album and I'm not sure if today's generation will understand or grasp an album like this. One more question: where was True Master? I was hoping for some production from him, but we didn't get it unfortunately. In the end, all involved should be proud of "A Better Tomorrow" and it's a 4.5 star album in my book. To RZA, GZA, ODB (RIP), Inspectah Deck, U-God, Ghostface Killah, Method Man, Raekwon, Masta Killa, and Cappadonna, even as (or if) you go your separate ways in your careers (and by no means is this a breakup), I want to say thank you. Thank you for the memories, especially circa 1993-1997; thank you for defining what a hip hop group is supposed to be; thank you for all that you have contributed to hip hop for the past 21 years. Mark my words, there will NEVER be another group like you, never. Thank you very much!