Heading into this album, I constantly said that I'm always hyped for a new Ghostface Killah album,and that was certainly the case as I headed to my local FYE, in the rain (lol) to cop this one on it's release date. I'm curious to see and hear how this one ranks alongside the rest of his stellar discography. We shall see. Oh man, the excitement and anticipation is there as I begin this review! 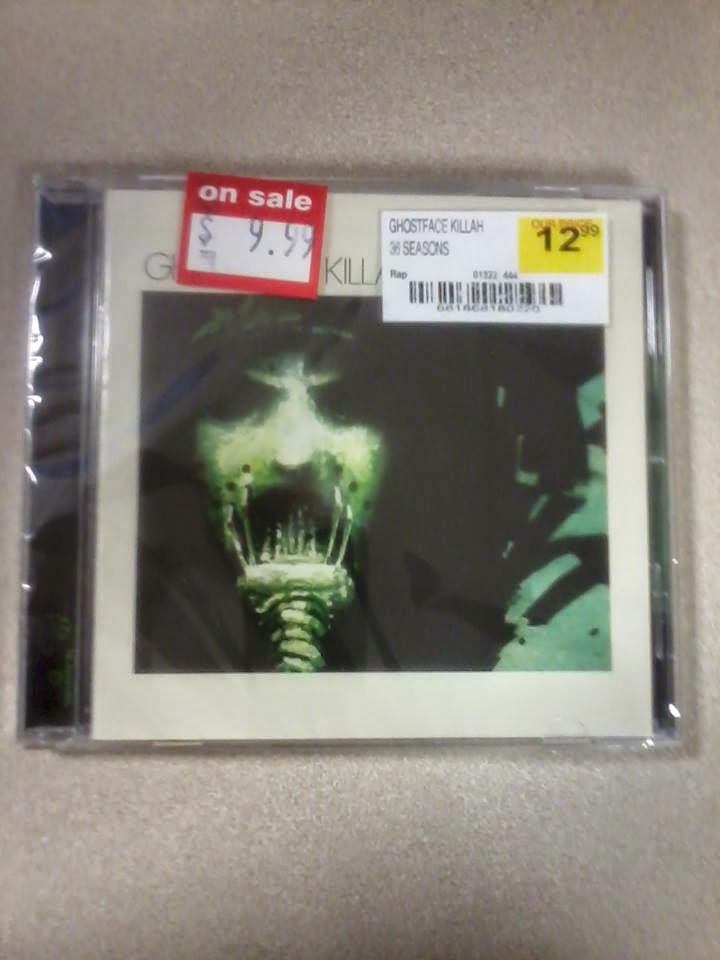 This story/concept album follows Ghostface as "Tony Starks" returning home after being incarcerated for nine years. I'm aware of this being a "concept album" in nature, but respectively I'm still going to conduct the review like normal.

"Ayo I'm back at the 98s, that's 36 seasons/Shit has changed up for all types of reasons"

The "battlefield" is where home is. Tony returns after being locked down for nine years, and of course in situations like these, things are not the same, even though he has plans to start with a clean slate; he also plans to put his name back in the streets with a vengeance. Guests Kool G Rap and AZ come through with nice verses (their roles become more defined throughout this story). Dope opener.
*5 out of 5*

"Feeling fresh, walkin' down the block/Bout to see my boo, it's about 6 o'clock"

Tony plans to stop by and see his girl, Bamboo (played by Ms. Springs), however, all is not wine and roses. Since he's been away, his girl has all but moved on and found someone new in the process. Tony tries to plead his case, letting her know he has some things on his mind he wants to share. Considering the subject matter here, this is one instance where Ghostface's descriptive lyrics shine brightly.
*4 out of 5*

3. "Here I Go Again"
Guest starring AZ and Rell
Produced By Fizzy Womack and the Revelations

".....I said I got this, message received/I'm gon clean up the block like you wouldn't believe"

Tony is informed by long time friend, Raj, now a cop, that there's drugs and corruption in the community, so it's obvious that Tony is going to clean up the block by any means necessary, with AZ along for the ride. Very good song.
*4 out of 5*

"A boss is a boss, learn to respect loyalty" -Kool G Rap

This appropriately titled, 1:58 banger finds G Rap playing the role of the respected veteran boss and Nems, who drops a dope verse (and much props for the nods to the classic "C.R.E.A.M."), is new to the scene but is willing to accept guidance. This becomes important later.
*4 out of 5*

5. "It's A Thin Line Between Love & Hate"
Performed and produced by The Revelations

In a rather odd choice, this is the Revelations' rendition of The Persuaders' "Thin Line Between Love & Hate."

6. "The Dogs of War"
Guest starring Kool G Rap and Shawn Wigs
Produced By The Revelations

"I need help to plan to attack, twist back these youngn's"

The main storyline here finds Tony getting his face damn near blown/burned off in the midst of an exploding crack lab, leading us into.....
*3.5 out of 5*

Tony visits "Dr. X," played by Monch, to get a mask created to help him breathe and in the process saves his life. And of course Monch comes through with a tight verse; imagine him rapping while conducting the surgery.
*4 out of 5*

Just when Tony is on the path of wiping the slate clean, there's a curveball thrown in, as AZ reveals himself to be a cop, a corrupt one, at this point in the story, double crossing his long time friend Tony.
*4 out of 5*

9. "Bamboo's Lament"
Performed by Kandace Springs
Produced By Malik Abdul-Rahmaan and the Revelations

Bamboo confesses her mistakes and change of heart in the form of a song.
*3 out of 5*

10. "Pieces to the Puzzle"
Guest starring AZ
Produced By Fizzy Womack and The Revelations

Not only is Tony locked up again, but it becomes clear to him that he was set up by AZ AND Bamboo, with the latter even bailing him out of jail. Great storytelling here.
*4 out of 5*

12. "Blood in the Streets"
Guest starring AZ
Produced By The 45 King and The Revelations

This is the climax and I'll give you one guess as to who's the last man standing, even during a final showdown with AZ.
*4 out of 5*

13. "Call My Name"
Produced By The Revelations

Even though Tony has reigned supreme, pun intended, as well as receiving the same recognition he did before his nine year sentence, he can't rest on his laurels just yet. He has more work to do in his hometown.
*4 out of 5*

14. "I Love You For All Seasons"
Produced By The Revelations
This instrumental closes the story. Let the credits roll!

Well, in terms of storytelling, a "movie on wax" so to speak, this was pretty damn good. I think it's safe to say that Ghostface may be the best storyteller in all of hip hop right now (not that there's much competition, but still). There's a start, middle, and ending, and to go along with the very good production, all of the guests played their roles well. Even though I had to listen to most of the songs more than once to get the full effect, it's still simple yet effective and I'll take this concept over "12 Reasons To Die", but not in a blowout though. Overall, even with a few missteps (Ghost not appearing on 4 of the songs, but then again that may be part of the story being told here, plus the re-working of "Thin Line Between Love & Hate" was not needed), I'll go with a strong 4 star rating for this fast paced album. I hope this story continues.
Posted by Wayne M. at Wednesday, December 10, 2014