An "updated" look at "PRhyme"

I decided to revisit this one, so what I'm going to do here is include everything verbatim from my previous post, along with some updated thoughts, which will be in bold!


The dope yet underrated Royce Da 5'9, 1/3 of the lyrical force known as Slaughterhouse, links up with the legendary DJ Premier for their first joint release together, "PRhyme." 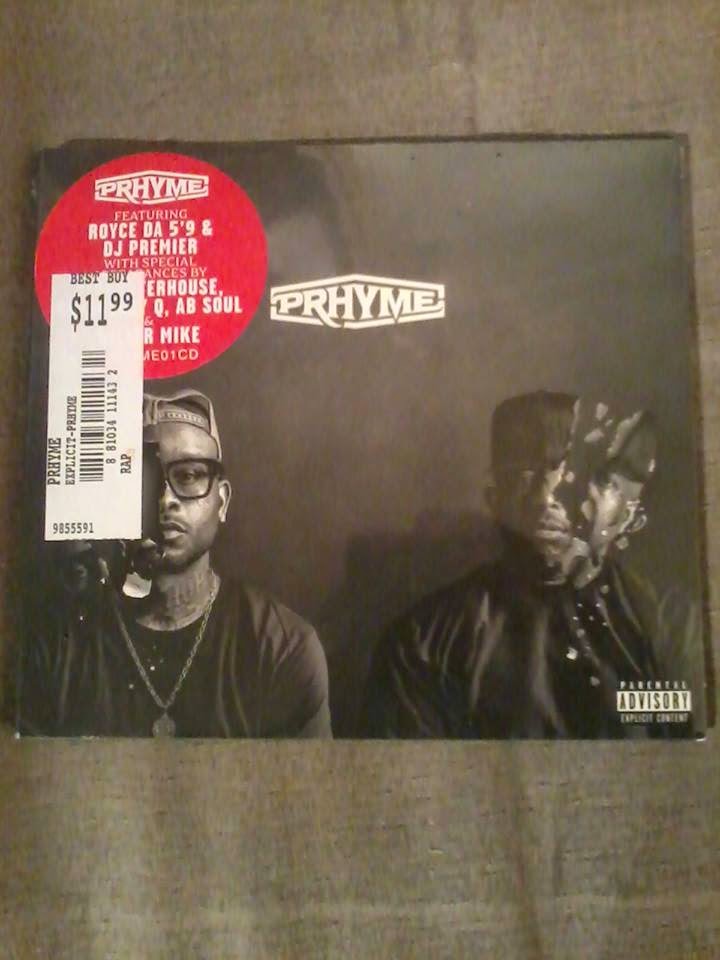 We start things with the dope opening title track. It sounds like he's talking to the listeners, but he just flows seemingly effortlessly on the Premo track. (I had to listen to that "PRhyme" opener a few times due to the sheer dopeness of it.)  Moving on, I was a little surprised to see so many guests on this EP (more on that in a bit), and one of the few times Royce had a joint to himself is "U Looz," which is dope but TOO short. It should've been an actual song to showcase him lyrically going in, and just when you think you're getting that, the song ends. (Feelings still the same on this one.) Going back to the guests, the appearances here are largely very good, which describe the Ab-Soul and Mac Miller assisted "Dat Sound Good" and "Underground Kings" (featuring Killer Mike and Schoolboy Q). I appreciate the homage paid to Bun B and the late Pimp C of UGK on the latter in a nice touch. Jay Electronica just about steals the show (which is kinda hard to do on a song with Royce) on the tight "To Me, To You." As far as highlights go, this is about where it ends for me. (No, loyal reader, the highlights don't end there. I'm not sure what I was thinking saying that.)

I don't have a problem with this album on a lyrical level (Royce has always came through on that end), it's the production and I'm sad to say that in terms of DJ Premier being behind the boards, and that's clear on songs like "Courtesy," which is a good song that hits the mark lyrically, "Wishin" (featuring Common), and the Slaughterhouse closer, "Microphone Preem,"  which again is on point lyrically, but it was something missing from these beats, even with an apparent throwback vibe on "Microphone Preem." (Revisiting these joints again, all three of these songs sound so good the second time around. Don't get me wrong, when I listened to the stream, it was an objective listen, and right then and there I should've went back immediately for a second listen. Common sounded more inspired on "Wishin" than anything on his "Nobody's Smiling" album that came out this year. )

Overall, I'm going with a solid 3.5 stars for this album (sadly it will not make my Best Albums of 2014 list and I had a spot ready for it too). (I'm going to take this one up to a solid 4.5 star rating and it will make my Best Albums of 2014 list, yes indeed.) Like I said throughout the review, Royce is still tight lyrically, but the production almost leaves a lot to be desired. (I was clearly a little hard on the production the first time around.) For the first time ever, I'm asking myself has DJ Premier peaked at this point, considering ALL the dope work he has done since the Gang Starr days?  I certainly hope not. (What, did I really say that in reference to my #3 favorite producer of all time? It's clear Premo still has it behind the boards, plus he has not peaked at all. The beats are different, but that's part of the appeal of this album along with the TIGHT lyrics from Royce.) "PRhyme" could've been SO much better with doper production, especially when you consider what Premo is capable of. (Yep, I was a little harder on this album than most. I'm glad I decided to revisit this before I missed out on a truly dope album.)  I hope to see different results if they link up for another project. (Allow me to be the first to openly campaign for a sequel to this!)

Again, I'm glad I decided to revisit this. I strongly recommend this album and I do agree with the homie John "KJ" Evans that this is Royce's best album to date. Much props and thanks to all involved for this DOPE album!
Posted by Wayne M. at Friday, December 12, 2014