Revisiting Das EFX's "Hold It Down"

After their 1993 debut "Dead Serious" and "Straight Up Sewaside" in 1994, two incredibly dope albums, Drayz and Skoob returned in the STACKED year that was 1995 with album number three, "Hold It Down." 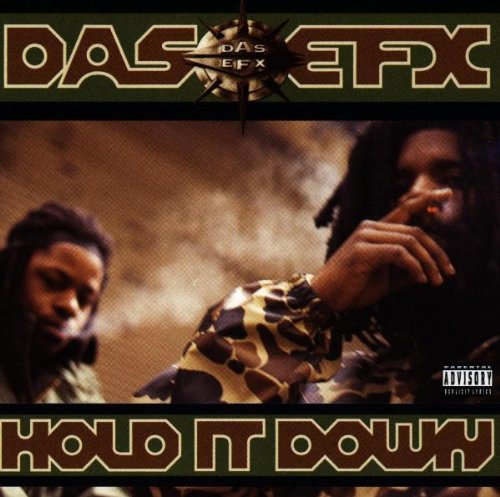 2. "No Diggedy"
Produced By DJ Premier

"Body snatcha, here to throw the pitch again/Gotta switch again because we back up in this bitch again!" -Drayz

Yes indeed loyal reader, Das EFX used "No Diggedy" a year before Blackstreet, Dr. Dre, and Queen Pen turned it into a hit in '96. This was a dope opener, much like "Mic Checka" and "Undaground Rappa" from the first two albums.
*5 out of 5*

It was not unheard of for Drayz and Skoob to be aggressive on the mic, and that's what we get on this Easy Mo Bee production.
*4 out of 5*

4. "Here We Go"
Produced By Solid Scheme
Solid Scheme usually came through for Das behind the boards and that's certainly the case on this one. "That's how it is and yo that's how it go!"
*4 out of 5*

Oh man looking back, Das had a nice lil' chemistry going with Premo, which is evident on this banger. Real hip hop usually consisted of dope beats and rhymes with NO gimmicks. Das succeeded here.
*5 out of 5*

6. "Here It Is"
Produced By Kevin Geeda

"Here it is, do it like this/Comin' from the sewer, yo you know we neva miss!"

This has always been one of my favorite Das songs and it's probably one of their more underappreciated songs too. They really ride Mo Bee's track SO nicely and in a nice touch, I always liked how the beat starts without the bass and once the song begins, the bass eases right on in. They come off as the "microphone masters, super rhyme makers," yes indeed. (They also had an equally dope remix with Mobb Deep.)

"A 40 and a blunt, that's all they really want." Shout out to Grand Puba and the well timed sample courtesy of the classic Brand Nubian single "Slow Down." Add in the Tims and dreads and you had one of the signature styles of the Black man in the mid 90s.
*4 out of 5*

I've always liked this one and at this point in hip hop, the art of freestyling MEANT something and it's sad that as an  artform it has essentially died as we speak. Drayz and Skoob come with the heat over a classic breakbeat, complete with the scratching courtesy of DJ Dice. Check it out and you'll see what I'm talking about!
*4 out of 5*

We get an introspective side of Das here. They talk about the familiar thing when it came to men of color: people saying we'll never amount to anything and essentially having to prove the doubters wrong in our own ways, and that's what Das did. They also talk about their experiences at VSU (Virginia State University), albeit briefly, how they hooked up, and of course how they landed a deal with EPMD after performing at a talent show. Very good song.

Oh yeah, before I proceed to song 12, I got a little story and I've told this once on the blog. I used to live in an apartment complex called "Lee Hall Apartments," which was the spot back in the day. In the summer of either '93 or '94, I remember some kids around the way was saying that Das was there. I was a lil' excited and when I went to that part of the complex, I saw a glimpse of two dudes, but to this day I can't say for sure if it was Skoob and Drayz or two men who looked like them. Maybe if Drayz (and Skoob) gets at me via Twitter they can clear this up a bit, lol.
*5 out of 5*

Skoob and Drayz "catch wreck" over a dope Easy Mo Bee track with a nicely worked Syl Johnson sample thanks to "Different Strokes".
*4 out of 5*

What a dope, appropriately titled, title track this is. "Hold it down, keep it on lock," that's what you gotta do.
*5 out of 5*

The ladies and fellas who get high, act fly (the ladies who do so), and run game get the dedication from Das on this one.
*4.5 out of 5*

This was basically a showcase for SHORT lived duo C-Dogg, nothing more or less. I don't think they were ever heard from again after this. C-Dogg did ok for the most part, until Skoob and Drayz come in for the lyrical kill towards the end.
*3 out of 5*

"Only a few will understand and appreciate what's about to happen!" -KRS-One

Oh man, look at the names here: Das EFX, KRS, who was also hot in '95, and Showbiz behind the boards. How could this NOT be dope? Four artists who represent(ed) the real hip hop indeed.
*5 out of 5*

The dopeness continues as Skoob and Drayz comes thru to catch more wreck, no doubt!
*5 out of 5*

This was a fast paced song, featuring a seemingly motivated PMD, who would drop his sophomore album, "Business Is Business" in '96.
*3 out of 5*

In an era when the CASSETTE would get the bonus track(s) and NOT the CD, it was a smart move to include this remix, because "Bad News" would've been an incredibly anti-climatic closing to an otherwise DOPE album. This remix is cool, but it holds no candle to the original.
*4 out of 5*

Unless something changes, this will likely be the last revisit of 2014. I was also ahead of the game a little because this album, as well as other classics released in '95, will celebrate 20 years in 2015, which is crazy (due to how fast time has went) and remarkable at the same time. On the third time around, Das EFX came through with an awesome album, bringing their usual dope rhymes over equally dope production. I've often mentioned on this blog that 1995, my favorite year in hip hop history, was a STACKED year, and with that said, "Hold It Down" unfortunately slipped under the radar and it was hugely slept on, receiving only a mere fraction of the attention that "Dead Serious" and even "Straight Up Sewaside" did. I want to give this album 5 stars, but when I objectively look at the ratings, it'll respectively come in at a 4.5 star rating. Overall, a dope album from start to finish and it's probably my favorite Das EFX album. Skoob, Drayz, and all involved, I want to say thank you!!!