After their classic 1988 debut, "Straight Out The Jungle," the Native Tongues' own Jungle Brothers returned the next year with their second album, "Done By The Forces Of Nature." 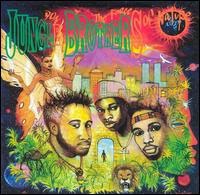 All songs produced by the Jungle Brothers

DOPE opener to start this album. Couldn't do nothing but bob your head to this one!
*Grade- A+

The JBs were definitely feelin' it on this one, bringing that same fun, party type vibe that made you feel good listening to it.
*Grade- A

Another very good song here, all about the sunshine, yes indeed. I also liked how they began the song, talking about the things they do (and where they plan to take the rest of the day) when seeing the bright sunshine.
*Grade- A

Oh man, as I was listening to this in the midst of the review, I was dancing myself, doing "the wop" and everything. Indeed, why would you wait to hit the dancefloor when this one came on? The beat instantly makes you get up and dance and the JBs were definitely in their element here.
*Grade- A+

Decent song here, with the theme of "making you dance" still present.
*Grade- B

6. Acknowledge Your Own History

This is an excellent, apply titled song, as well as another song from this period that today's generation could benefit a lot from listening to. It's never a bad thing to acknowledge your history and recognize where you came from. In one of many notable bits, they talked about the history of Black people not being taught to the fullest extent in schools back then ("Yeah I cut class, I got a D/Cause history meant nothin' to me"). The following lines speak/spoke volumes:

Dina is the apple of the JBs eyes and affection. An ok song for the most part.
*Grade- C

This was an instrumental, albeit a dope one. (I'm not sure if I mentioned it before, but I don't rate or grade instrumentals.)

9. Done By The Forces Of Nature

The JBs scored quite a few points for creativity on this very good title track.
*Grade- B+

The "tribe vibes" with a complete hip hop twist were alive and kicking here and the JBs work the beat so well.
*Grade- A

This is definitely an underrated gem right here, coming with the same JBs flavor that made "Jimbrowski" a classic.
*Grade- A+

"The darker the berry, the sweeter the juice"

You can never go wrong with any type of tribute to the style and grace of the Black woman, especially when it's done right. VERY good.
*Grade- A

This was a VERY dope song which found the JBs talking about the future.
*Grade- A

The Native Tongues were in full effect on this classic, the best song on the album, and much like De La's "Buddy" remix, everyone was clearly feeling it and enjoying themselves. And even if they were "doin' their own dang," they were all on the same Native Tongue page.
*Grade- A+

The Jungle Brothers' second album slightly gives "Straight Out The Jungle" a run for its money, but overall I still couldn't tell you which one is the better album. Either way, they still took what worked on their debut and came with a more creative style as well as a strong focus on having fun and making you dance, and there was never anything wrong with that. Many props and thanks to all involved for this album!

Well loyal reader, this marks the end of the 1980s Hip Hop Nostalgia sessions, and it was GREAT to go back down memory lane, listening to and talking about such groundbreaking, classic albums, witnessing the complete evolution of hip hop in the process. But it DOESN'T end there! In 2015, the sessions chronicling the 1990s will finally begin, and if you thought the 80s sessions were great, you ain't seen nothing yet! Thanks for your continued support of my blog and stay tuned!!!!!
Posted by Wayne M. at Saturday, November 08, 2014