Lord Finesse, the "funky man" plus an esteemed member of the Diggin' In The Crates crew, had made his mark in hip hop, beginning with his 1990 debut, "Funky Technician," and his second album, 1992's "Return of the Funky Man" (both are due for revisits at some point). In 1996, he returned with album three, "The Awakening," largely recorded in 1995. I recently had this one in the ride, and it ended up being better than I remembered, which of course necessitated this "revisit post." Also, I never did get a chance to cop this in '96, mainly because I don't recall ever seeing it in any of the record stores in my area at the time. It's a little amazing to think that there was a time when certain albums would be released in New York but not elsewhere. Those were the days. So after this brief intro, let's go back to hip hop in 1996, one of my personal favorite years! 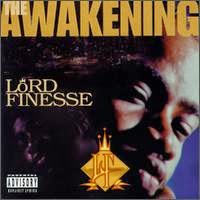 
All songs produced by Lord Finesse, except where noted

Da Bouncemaster DJ Doo Wop comes through with a few words, over an incredibly dope beat I might add.

This apply titled song is simply dope, with Finesse firing off dope punchlines left and right, so much so that if I were to name any of them, I'd be quoting the entire song. "True And Livin" was definitely the right title for this.
*5 out of 5*

Another skit here, or as Finesse would call it, "an EP intermission." Fellow D.I.T.C. member O.C. brings a BRIEF but very good freestyle over another incredibly dope beat. This leads us right into.....

NO gimmicks indeed. All three MCs work that East Coast hip hop magic over ANOTHER incredibly dope beat, with equally dope lyrics to match. Awesome.
*5 out of 5*

Ms. Lyte stops by to show Finesse (and the album) some love.

This one was for the ladies all the way, which finds Finesse coming with a ruggedly smooth style. Marquee really sounded like this was her first time on a song, even if she just had a few lines here and there. Very good song.
*4 out of 5*

Akinyele, over a Premo-esque beat, also stops by to show Finesse some love.

"Lord Finesse got the ruff raps, fuck that/When I do my thing, I come off like a hub cap"


Another dope song right here, nothing more or less.
*4 out of 5*

Showbiz, another member of the D.I.T.C., stops through for a brief moment.

Speaking of the D.I.T.C., Finesse, Diamond D and A.G. represent to the fullest on this one, with Marquee coming through with a decent verse of her own.
*4 out of 5*

This does give the closing song a run for its money as the best song on the album and I have to go in depth on this one.


Finesse tells the story of a young kid coming up. The first verse goes into how he lacked confidence, received little to no respect from his peers, however, a girl comes into the picture. He clearly likes what he sees, but she wouldn't give him the time of day ("Matter of fact she made him feel low/She said she needed a real man that was out there makin' real dough"). Naturally, to a young kid who doesn't know any better, this makes him change his whole attitude, as told by Finesse. Things continue with the second verse. The kid begins making money by way of selling drugs, plus doing some killing and riding in nice cars, and of course you couldn't tell this kid nothing now. As usual in a case like this, two things happened:


You can say this was a little karma, but not surprisingly he dismisses the girl and goes on about his business, heading into the third verse. The kid meets his untimely demise, as the girl, in a clear act of revenge, snitched to some rival cats, next thing you know he was shot to death ("Shot him up, well blow me down/Cause if money wasn't Catholic, he was holy now"). Finesse ends the song with two notable lines:

"He had it goin' on and played the perfect role
But ask yourself a question, was it worth it though?"


This was an EXCELLENT, simple yet very effective bit of storytelling by Finesse, and it's one of those songs that today's youth could benefit so much from listening to. The theme is easy to understand: be true to yourself and also know right from wrong, plus it's never good to change yourself all in the name of money, women (or men), and anything materialistic, because as noted in this story, it won't get you far at all.
*5 out of 5*

The one and only DJ Kid Capri stops by with a drop for Finesse.

This is kind of an underrated gem right here. Granted, he may not be saying nothing entirely new, but the confidence complete with the laid back style make this one a winner.
*5 out of 5*

Finesse and KRS all but dismiss any and all gimmicks in hip hop; and there's certainly been a LOT of gimmicks over the last 5-10 years, MORE than what we saw in '96. Just be yourself, you don't need a gimmick, no question.
*4 out of 5*

Wow, this TIGHT album couldn't have closed on a more DOPE note. This was at a time when the collaboration/guest appearance MEANT something and it wasn't done just for the sake of getting everyone on the same track, with no rhyme or reason. 2/4 of Brand Nubian, Sadat X and Grand Puba bring their usual, especially Puba with his "creamy ass rhyme flow." In addition, Large Professor was also very skilled behind the boards and on the mic just like Finesse, and both men brought dope verses as well. Overall, a classic collabo here and one of the best of '96.
*5 out of 5*

Wow, this is ANOTHER album that has aged well all around. Although Finesse had been in the game for a respectable amount of time at this point, he was firing on all cylinders, on the mic and behind the boards. He also had a very high opinion of himself, truly confident in all of his abilities, and now when I think about it, this is another thing that's missing in today's hip hop: confidence. As far as I'm concerned, "The Awakening" is Finesse's best album, 4.5 stars, and while "Hip 2 Da Game" received very limited radio and video play, it sadly flew under the radar in the STACKED year that was '96, very slept on. It's one of many albums during this period that define the East Coast hip hop sound. To date, this remains the last album he's released and I personally don't see him releasing another one any time soon. Lord Finesse, if you haven't been told before, I want to say thank you with mad props and respect for giving us this album.
Posted by Wayne M. at Monday, October 20, 2014