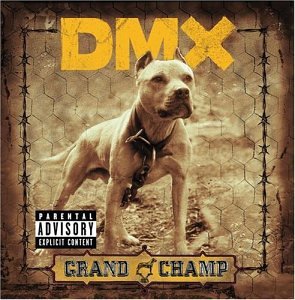 I usually don't rate intros, but sometimes I make exceptions depending on the song. This particular intro was quite dope, a very good lead in to the next song.
*4 out of 5*

Yes, this title would suggest something we've heard before, but to X's credit, he brings his aggressive tone with a slight introspective side for this one. Then again, we have heard songs like this before, but X's perspective was always engaging, entertaining, and fresh when he brought it out.
*4 out of 5*

3. Where The Hood At
Produced By Tuneheadz Classic banger. At this point, X was still capable of making something hard enough for the streets but not out of place on the radio, and believe it or not, this joint did grace radio and TV for a respectable amount of time in 2003. Vintage DMX right here.
*5 out of 5*

4. Dogs Out
Produced By Kanye West

You read that right, X did work with Kanye West when the outspoken producer was still on the verge of becoming one of hip hop's best behind the boards. Over one of Kanye's then signature beats, X comes with more of the same, not in a bad way though (he even threw a shot at Ja Rule towards the end too).
*4 out of 5*

The radio loved this one back in the day (and I believe it still receives play in certain areas). Without compromising his sound at all, in my view, X still knew how to make a banger that could blaze the radio and the clubs without coming off as watered down. Plus, my mom still loves this one too, yes indeed!
*4 out of 5*

Hands down, this is my favorite song on the album; another BANGER, bringing the forces of Ruff Ryders/D-Block and G-Unit together. I can see why X wanted a still inspired and motivated 50 for this one, considering how he was the hottest MC in the game in '03. DOPE stuff here.
*5 out of 5*

8. Bring The Noize
Produced By Tuneheadz

"You know how we roll nigga, bring the noize
Y'all don't wanna fuck wit' them boys
Come on dog put away them toys
Cause I'm gon put in a clip and you'll get yours"

The hook above generally sums up this song in one fell swoop. It's decent, nothing more or less.
*3 out of 5*

A good, apply titled "crew love" type song, complete with a nice hook by Ms. Syleena Johnson.
*4 out of 5*

10. Fuck Y'all
Produced By Ron Browz

Ron Browz's beat was definitely made for X, but this one, even with it's call and response hook, could've been a little better with a different approach.
*3 out of 5*

12. We're Back
Featuring Jadakiss and Eve
Produced By Tuneheadz

"I got a wet haze, coke, and a p-blow block/But y'all still missin' the point like a free throw shot" -Jadakiss

At this point, it had been a while since X, Jada, and Eve were on the same track, and with that being said, this was largely good.
*4 out of 5*

14. Rob All Night (If I'm Gonna Rob)
Produced By Rockwilder

At first I thought this was aiming for radio/TV play, then I changed my thoughts because the title of this would've killed any chance of this gracing radio and TV. The hook stems from the first four lines in X's opening verse from "No Love For Me." Either way, another good song, fast paced too).
*4 out of 5*

15. We Go Hard
Featuring Cam'ron
Produced By No I.D.

X linked up with another hot crew in hip hop at the time, in this case 1/4 of the Diplomats, Cam'ron. This one does go hard, and I liked how they referenced "Pull It," their previous collabo together from '98, throughout this one in a nice touch.
*4 out of 5*

Unlike song 14, this horn laced joint was aiming for the radio I think. It's still very good with a vibe suited for a "Ruff Ryders parade."
*4 out of 5*

17. The Rain
Produced By DJ Scratch

We had seen an emotional/personal side of X before, and this one finds him in tune with those feelings once again.
*4 out of 5*

Well, I'll keep my personal views out of this and just concentrate on the song itself. X, a married man, is going through problems at home with his wife, but also has the "side chick." It's clear that he's torn, with lines like "I love my wife/We goin' through things, but I ain't comin' home tonight." Now this was different territory for X, but he made it work I guess. Monica, another artist who was hot in '03, came through with a very convincing performance on the hook.
*3 out of 5*

20. A Yo Kato
Featuring Magic and Val
Produced By Swizz Beatz

On a sidenote, you could spot this Swizz beat a mile away, but thankfully it doesn't interrupt the flow of this nice tribute to one of X's long time friends.
*4 out of 5*

Songs which find artists giving thanks to the almighty God usually hold a soft spot with me, however, while this is still a very good song, I feel the "Make The Music With Your Mouth" sample was out of place here. With a different beat, this would've been an automatic "5 out of 5."
*4 out of 5*

This was a good song, however, I still feel it closed the album on an anti-climatic note considering songs 21 and 22, respectively.
*3 out of 5*

X had did it again with another excellent, 4 star album. Interestingly enough, when I first played this, I wasn't impressed, but after a while it grew on me. I could've done without the continuous skits and genitalia references throughout the album, but overall I was satisfied. I also want to say that this album was REALLY missing "X Gon Give It To Ya," and had that been included, the rating may be a little different, plus it could've replaced songs like "Fuck Y'all," "Bring The Noize" and even "On Top." Not too long after this release, X would make a few more movies and not drop another album until 2006's "Year Of The Dog... Again," which will be covered next. 1. Intro
Produced By Dame Grease
This brief intro takes us right into.....

When X goes away for a while, he knows how to return with a BANGER, and hot damn that's what we get here. Swizz's beat simply knocks (especially in the ride) and X came through with the charismatic aggression that's hard to deny. This song did make a little noise at the time, but it really should've been bigger than what it was. You can attribute that the ever changing nature of hip hop, and X does comment on that during this song too. Other than that, this is SO DAMN DOPE.
*5 out of 5*

X probably was watching "Training Day" going into this one, because that "Alonzo powered theme" is VERY present on this 3:57 banger.
*5 out of 5*

Three straight bangers to set this album off proper, and man, did Busta steal the show from X here?? I think so, and that's a rare occurrence if you ask me. This one also was tailor made for the dancefloor.
*4 out of 5*

5. It's Personal
Featuring Jadakiss and Styles P
Produced By The Tuneheadz

Any time you got a combination of X and The Lox on a track, something dope would result and that's the case here. Styles and X brought their usual dope verses, but Jada kills this one, D-Block style.
*4 out of 5*

When you see ANY variation of this song title, you should automatically know what the song is about. X pulls no punches when talking about the pros and cons (mostly the latter) of the situation with his "baby motha." And X, when you have a child with someone, (and I get the theme here, I guess), you are essentially stuck with that person for life in a way. Just saying.
*3 out of 5*

The thought of X spittin' over a rock infused beat was intriguing, but this simply did not work. Filler.
*2 out of 5*

9. Give Em What They Want
Produced By Scott Storch

A fast paced, apply titled song right here. X was one of those MCs who succeeded in this area if you ask me.
*4 out of 5*

This was about what you would expect from X, but it sounded like he was trying a little too hard here.
*3 out of 5*

11. Blown Away
Featuring Jinx and Janyce
Produced By Devine Bars

Very good song with its introspective feel.
*4 out of 5*

This was an interesting song, showing how X copes with the subject of death.
*4 out of 5*

13. Life Be My Song
Produced By Dame Grease

Again, this was a good song, but I got the feeling that we already heard a song like this on the album.
*3 out of 5*

15. Lord Give Me A Sign
Produced By Scott Storch Excellent song and THE best way to close this album. Remember "The Convo," "Ready To Meet Him," "Angel," "A Minute For Your Son," and "Thank You?" This song follows in the same footsteps of X talking to his God. This is another song that should've been bigger than what it was.
*5 out of 5*

All things considered, this was a very good album from DMX, 3.5 stars. It starts off with a bang, slows down a bit in the middle with a few filler songs, then slightly picks back up towards the end, especially with the closing song. Looking back, it was also clear that DMX had really cooled off after a hot run, and with hip hop changing all the time, considering where things were going as 2006 turned into 2007, he was irrelevant and had fallen off if you ask most fans. Furthermore, not only would he continue to make movies and get in trouble with the law more times than you can count, he wouldn't release another album until 2012's "Undisputed," which will be revisited next.
Posted by Wayne M. at Friday, October 17, 2014