After 2000's "Rule 3:36" album, Ja Rule still had some momentum on his side, and that was certainly clear heading into his third album, "Pain Is Love." I recall seeing somewhere (probably in either the "Rule 3:36" or the "Murderers" album insert) that this album was intended to be his first double album, but thankfully that didn't come to fruition (more on this later in the revisit/review). Believe it or not, this album has a little nostalgic vibe with me, as not only did I initially cop it on its release date, but this came out during my senior year in high school. I haven't played this one in SUCH a long time, so I know I'll be back in 2001 all over again. How does this hold up 12 1/2 years later? We're about to find out! 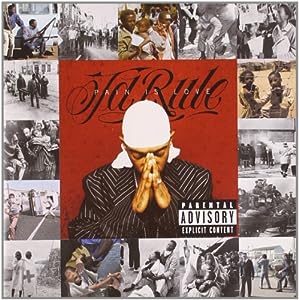 All songs produced by Irv Gotti

Hot damn, I never forgot how dope this one was, and back in the day, I used to bump this constantly. This appropriately titled banger was aiming for an epic feel and it delivered. In addition to Irv Gotti and Lil' Rob, Ty Fyffe also brought out the best in Ja. I had to bump this three times while doing this review.
*5 out of 5* This was quite the popular song in 2001, definitely vintage Ja Rule if you will. Case did a good job on the hook, plus the song effectively utilized Stevie Wonder's classic "Do I Do."
*4 out of 5*

Black Child said "it's a blessing to ball," and that was probably one of the dopest lines he's ever said. This was the standard "crew love" type song, a decent one too. I'll have more to say about Ms. Ashanti on the next song.
*3 out of 5* That was one of the most memorable hooks in 2001, no doubt. This song blazed radio and TV for quite some time in 2001 and again, during my senior year in high school, I heard it often. Ja was completely in his element here and you could listen to (and look at) Ashanti and tell she was a superstar in the making. She and Ja always had good chemistry with each other. Personally, a classic to these ears.
*5 out of 5*

"Every thug needs a lady!"

This title suggests the correct assumption: that we have heard songs like this done before (and since). Then newcomer to Murder Inc, Charlie Baltimore, played her musical role good here.
*3 out of 5*

This apply titled song may come off like more of the same, but it's very good.
*4 out of 5*

Remember Boo & Gotti from R. Kelly's "Fiesta" remix? Well this was one of their few appearances here. This comes off more or less a showcase for them as well as Tah and Black. Nothing special, but nothing terrible either.
*3 out of 5*

This also blazed radio and TV in 2001, specifically that summer. A very good song that still holds up today. Ms. Lopez (aka J-Lo) continued to build up her credibility with the hip hop heads.
*4 out of 5*

This likely would sound good while taking a ride during a bright sunny day with the windows down. Another good song.
*3 out of 5*

Yep, another song about "extasy." Guess we couldn't get enough of those. Missy and Tweet, who were also having a very good year in 2001, comes along for the ride.
*3 out of 5*

This one was seemingly all over the place. While it sounded like Ja was confused by the attention he was receiving from young girls (17 to be exact), he seemed to be embracing it a little. This could've been left on the cutting room floor.
*2 out of 5*

Allow me to debunk a "theory" once and for all. Ja Rule, in my opinion, never came off like he was trying to "be like 2Pac." Don't get me wrong, there was an obvious influence there (and Pac influenced MANY artists, before and after his untimely death), but in no way was he trying to be a second version. Every time I read and heard those comparisons, I shook my head because of how untrue they were. As for this tribute to Pac's own "So Much Pain," Ja did a very good job here, and that's just what it was: a tribute and not an instance of "biting."
*5 out of 5*

The title track closes the album on a relative good note, even though it comes off like more of the same.
*3.5 out of 5*

"Pain Is Love" has aged quite well, and of course the nostalgic vibe remains. The album was heading straight for a solid 4.5 star rating, but the quality of the second half dragged things down just a little. With that said, this is a 4 star album, definitely Ja's second best after his debut. The success remained as well. In addition to the aforementioned hit singles blazing radio and TV, the album was certified 3X Platinum and nominated for a Grammy award for Best Rap Album in 2001. As far as a double album goes, it was a smart move to not go that route for PIL. Not saying that Ja couldn't have pulled it off, but what we got was just fine and a second disc would've had an impact on the overall quality of the album and not in a positive way. I'll be adding this back to the collection at some point. Now, allow me to talk about "post Pain Is Love" Ja Rule, with hindsight being 20/20 and all.

After three straight successful albums, I feel Ja should've took a well deserved break from hip hop, as well as updated his sound going into album number four. Speaking of which, oh God, do I really REALLY have to talk about "The Last Temptation"?? (I'm sorry Ja, but if you're reading this, you have to bare with me.) The descent of Ja's career has been covered in depth on my blog, but looking back, man, what a fall. With the emerging onslaught of G-Unit in late 2002-early 2003, as mentioned, Ja should've recharged his batteries and came with an updated sound. They say "if it ain't broke, don't fix it', but when you got a hungry 50 Cent emerging, and you're coming with the likes of "Mesmerize Me", "Thug Lovin", and "Wonderful", it makes you look and sound lame in retrospect and by comparison. Had Ja went in a different direction, maybe we would be talking about his career in a different light right now. Overall, "Pain Is Love" was his last brush with fame and relevancy on the hip hop scale.
Posted by Wayne M. at Friday, September 05, 2014