Known as the first (and only) lady of the, well I guess I should say the now defunct Flipmode Squad, Rah Digga was pretty nice on the mic and one of the most underrated femcees of her time (I'll be mentioning that again trust me). Prior to her 2000 debut, she represented herself nicely when it came to guest appearances, most notably on Busta Rhymes solo albums as well as the Flipmode Squad project. How does her debut hold up 14 years later? We shall see during this revisit! 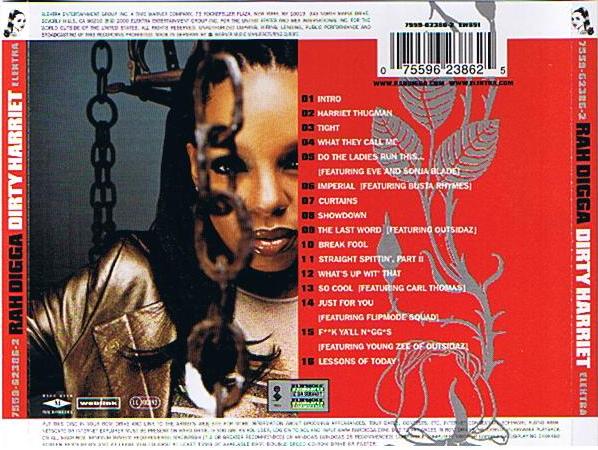 Things get started in the most hype way possible for the coming of Rah Digga with this intro conducted by Rampage and Spliff Star.

This brief joint could've been that much better if it was longer, however, all it does is wet our appetite for what's next.....
*3 out of 5*

Mr. Walt, along with DJ Evil Dee, were behind some bangers, specifically those with the Boot Camp Clik, so it's only fitting that he brought that same touch for Rah Digga. This is an apply titled banger right here, and it's "tight" all around. Digga works this beat so well with dope lyrics to match.
*5 out of 5*

4. What They Call Me
Produced By Pete Rock

Digga flows nicely over a nice, soul tinged banger provided by Pete Rock. Even the hook consisting of spelling her name out sounded fresh and not outdated at all.
*4 out of 5*

5. Do The Ladies Run This
Featuring Eve and Sonja Blade
Produced By Shok

The ladies did represent on this one, yes indeed. Eve came through with a nice verse, but man, Sonja Blade (I wonder what happened to her) gave Digga a run for her money in terms of who had the best verse. Either way, this was very good and just listening to this makes me shake my head at the current state of femcees in hip hop.
*4 out of 5*

Oh yeah, I never forgot how DOPE this one was! I feel Digga and Busta had very good chemistry when it was just them on a track together, and this is a prime example of it. Digga, as usual, flows VERY nicely over Shok's beat, and of course Busta was his usual rowdy, but dope, self. I liked how the song started with a verse from Digga, then one from Busta, and they close it by going back and forth. Underrated gem right here.
*5 out of 5*

Steppin to Digga on the lyrical tip, yep, it'll be curtains indeed, over! Line for line, she goes in on this one.
*4 out of 5*

Another good song right here, almost seemingly begging for a Busta Rhymes verse.
*4 out of 5*

This was a showcase for the Outsidaz (Az-Izz, Young Zee, and Slang Ton), who did a decent job throughout.
*4 out of 5*

Oh man, Digga was FEELIN IT on this one, strictly for the clubs and it wasn't too rough for the radio or TV.
*5 out of 5*

Digga does nothing but figuratively spit on the competition here. It almost comes off as a freestyle, but make no mistake about it, this is still dope and Digga is in control of it all.
*4 out of 5*

Digga has some questions and then some for everyone. And yep, it's still dope.
*4 out of 5*

I really like the flow of this appropriately titled song. Digga was cool, fly, nice, and mellow and Mr. Carl Thomas was not out of place on the hook.
*4 out of 5*


14. Just For You
Produced By Nottz

Digga, Busta, Spliff Star, Rampage, Lord Have Mercy, Baby Sham, and then newcomer Roc Marciano carry the Flipmode Squad banner here, just for you.
*4 out of 5*

This being apply titled depends on your perspective. The "call and response" hook was in full effect.
*4 out of 5*

You know when you hook up with Premo he's going to bring out the best in you, and that's what happens here. Digga also gets to flex her storytelling muscles a bit.
*5 out of 5*

This was the first of two bonus tracks, an apply titled song that's just as dope as you think.
*4 out of 5*


*18. Clap Your Hands
Produced By Megahertz

This may have a (slight) party vibe, but on the surface it's a rather creative banger, one I didn't want to end. It was that good.
*5 out of 5*


Allow me to comment on something before I proceed with my final thoughts on this album. WHOEVER said that Rah Digga sounded like a man, I'm not sure where the hell that came from, but that's never been the case as far as I'm concerned. She's 100 percent woman and that clearly came across in her voice. As far as this album goes, this is quite the underrated gem, a 4.5 star album all the way. Digga lyrically SHINED brightly over DOPE production. She was in control the entire time and you never get the impression she was a guest on her own album. One of the main reasons I've always liked Digga a lot is the same when it came to MC Lyte: they let their skills on the mic do the talking and they didn't have to take off any clothes, present controversial lyrics, or do anything to draw unwanted attention to themselves. "Dirty Harriet" has aged incredibly well and I give this a STRONG recommendation if you never heard it. This may sound like "overpraise" (I don't care, lol), but not only would I put this one album up against ANY album from a femcee, as far as I'm concerned, she's #2 for me in terms of the greatest femcee of all time, bottom line. She also released the slept on, yet dope "Classic" in 2010 (which also may be due for a revisit), and it's just as good as her debut. Mad props and thanks to Digga for this album. A female presence like yours is certainly missed in today's hip hop world.
Posted by Wayne M. at Wednesday, August 20, 2014