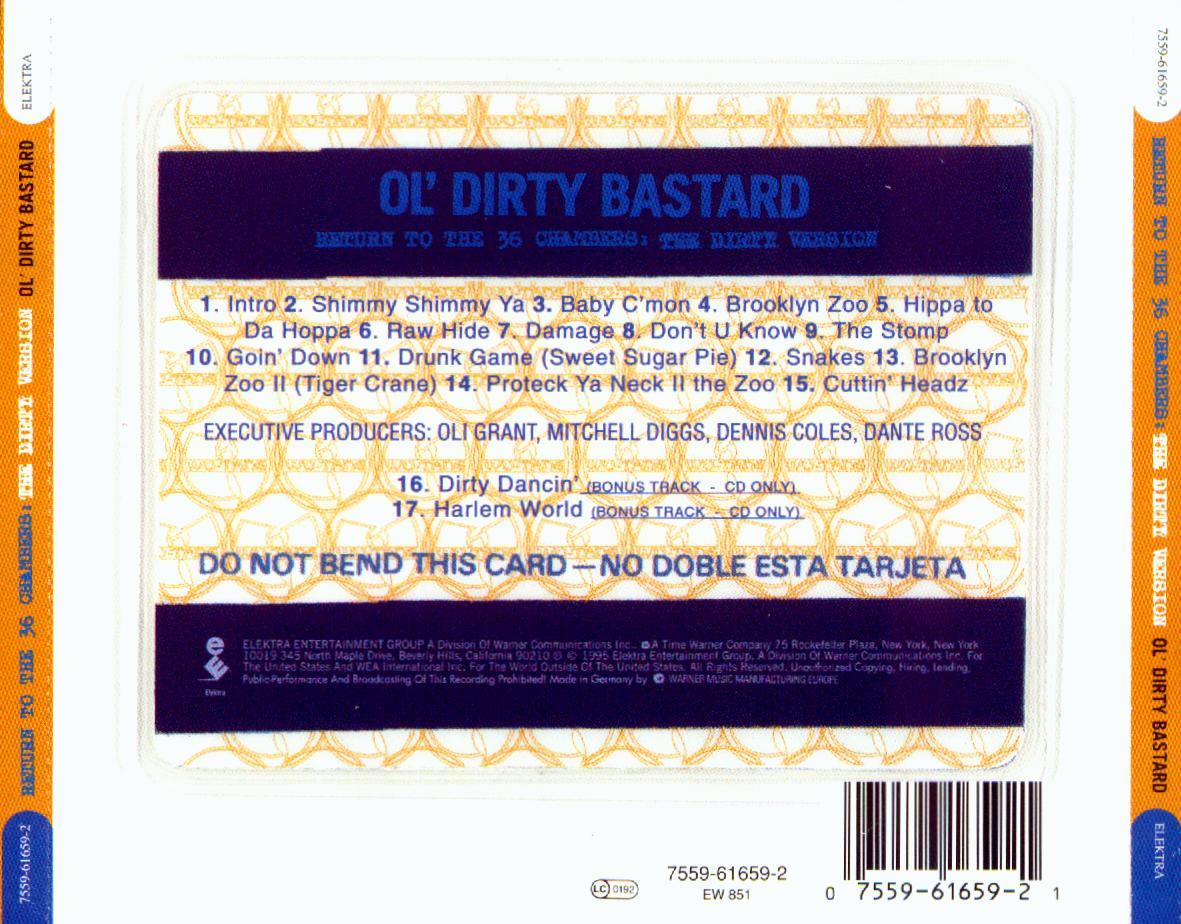 Needless to say, this album cover is one of the most unorthodox, unique covers in hip hop history, and you definitely wouldn't see anything like this in today's hip hop world. I feel one reason for this cover was for the late Ol Dirty Bastard to show the world he was different and wasn't ashamed of himself and where he came from, and he certainly had my respect for that. And with most albums from the 90s, this one comes with a story. My cousin Terrell had this on tape, and that's how I heard it the first time, plus my aunt Denise had the "Shimmy Shimmy Ya" single on cassette, and from there, I HAD TO cop this joint, which I eventually did. I owned the cassette twice, and including the version I have now, I copped the CD at least three times.

ODB was not a lyricist in any form (he probably would've told you that himself), however, he was entertaining as hell (sometimes for the right and wrong reasons), plus he could flow when he had to. Although I never listen to hip hop for a comedic fix, one thing ODB did better than anyone else at the time was make people laugh, and to this day when I bump this album, I laugh at some of the moments, and I'm about to dissect this album. Read on!


1. Intro
This intro starts things off on a funny note. When I first heard him say, "let me introduce myself, my name is Mr. Russell Jones," lol, at the time I had no idea that was his real name, so it had me cracking up, thinking he was making that name up. I still laugh when I listen to it today. Towards the end, he says "I'm just kiddin' wit' y'all, how y'all feelin, listen to the album cause it's BANGIN!," and that was SO true.

2. Shimmy Shimmy Ya (Produced By: The RZA) Silly song title aside, this was a ht in 1995, and since then, each time I hear it, all it does is instantly take me back to that moment in time in my life. You can't do nothing but nod your head when you hear this and sing along: "Shimmy Shimmy Ya, shimmy yam, shimmy yay/Gimme the mic so I can take it away!"
*5 out of 5*

Another RZA produced banger and I love it! I also love the great video, along with "Shimmy Shimmy Ya "at the beginning of it, and two of the most memorable parts of this song are the end of the first verse ("that's why you gotta do what ya gotta do, come on, can I get a Wu-Tang?! WU-TANG, WU-TANG, WU-TANG, it's on da brain!") and the end of the song, when he says "I'm gonna give it to ya, baby, baby, then when he gets to the third baby, he extends it and it ends the song, leaving you wondering if he ran out of breath doing it or not, lol!
*5 out of 5* ANOTHER banger here, and this lyrically may be his best song ever.
*5 out of 5*

Lol, this joint is a trip right here. Not only does RZA's beat absolutely knock, but ODB is just hilarious on this one, and in one of the funniest and dirty (pun intended) lines I've ever heard on a hip hop record, he says and I quote, "I keep my breath smellin' like shit so I can get FUNKY!!" LOL, good God!
*4 out of 5*

Let's see, we have ODB being himself, a tight verse by Rae, a show stealing verse by Meth, all over another tight RZA production. Classic if you ask me.
*5 out of 5*

The average person may say that GZA probably ran lyrical circles around ODB on this one, but surprisingly, not only does ODB hold his own on this track, but this is another where he shows he can flow when it's time.
*4 out of 5*

8. Don't You Know (featuring Killah Priest) Produced By: The RZA

Decent song, sort of getting you ready for the next (hilarious) song.
*3 out of 5*

Oh man, lol. This joint is hilarious too, lol. ODB trying to sing has to be heard to be appreciated, or laughed at I guess, lol. I don't think he meant to be serious with this one, as his sole purpose was to entertain the audience, and he did that on this song. (I also read a review where the writer suggested that OBD sounded like he was having an actual orgasm during the recording. I'll let you form your own conclusions on that.)
*3 out of 5*

(For sheer comedic purposes, I gotta bump this one up to a "4 out of 5" rating.)

I still can't determine who had the best verse on this song between RZA, Masta, or Killah Priest, but rest assured all three of them kill this dope track, and by the time ODB comes on at the end, it's a little too late for him to do any damage to this track. He tried though, lol.
4.5 out of 5

ODB, seemingly drunk on this track, just incoherently recites the first verse from the song "Damage," sometimes starting the verse over as soon as he starts it, all until Ghost comes in and just RIPS everything to shreds. 3 out of 5, mostly due to Ghost's verse.

Never mind the fact that "Shorty S*** Stain" is possibly one of the WORST names for an artist in all the history of music or that this shouldn't have been named "Protect Ya Neck II." The only thing that saves this is RZA's track, and although everyone's verse are not wack, they're not memorable either.
*2.5 out of 5*


(I might've been a little too hard on this one. Granted, it holds NO candle to the original "Protect Ya Neck," but everyone is "energetically raw" here and it's kinda hard to ignore. I'll bump this one up to a "3.5 out of 5.")

15. Cuttin Headz (featuring The RZA) Produced By: The RZA

RZA and ODB had some fun on this track, even with a title like "Cuttin Headz," and you can tell that as you listen to it.
*3 out of 5*

This short song is very good, mostly due to Meth completely stealing the show (again) and RZA's banger of a track.
*3.5 out of 5*

Even back then and now, I have no idea who the hell Big Dore is, but no matter what the case is, this song is totally forgettable and it clearly should NOT have made this album.
*1 out of 5*

Overall, during Wu-Tang's peak, they were on top of the world, and this release, while different and not the best on a lyrical level, what you heard (and saw) with ODB was what you got, and judging by the success of this album and the fact that it still holds up today, he delivered, and as I mentioned before, I don't listen to hip hop for a comedic fix, but hot damn, ODB still makes me laugh to this day when I listen to some of the songs on this album. 4.5 stars.