After two successful (and classic) albums in the form of "Radio" and "Bigger And Deffer," LL took '88 off and returned the next year with his third album, "Walking With A Panther." Even the album cover suggests a new direction and attitude, and all of this plays a rather strong role in this album. 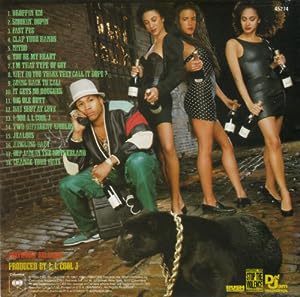 This was always one of my favorite songs on the album, and today it still is. LL is simply dope, energetic, and inspired on this hype opener, doing what he does best to the competition.
Grade- A+

LL was so slick on this one, he had you believe he was actually "high" during this recording session. Either way, very good song.
Grade- B+

LL tells a brief story about a young lady, a rather quick rise and fall to say the least. Had this song been a little longer with 2 or 3 additional verses, conducted in a story form, this would've been a sure fire A+.
Grade- C+

The dope beat, complete with the matching guitar sounds, and the dope lyrics from LL made this one another very good song. You couldn't do anything but clap your hands and nod your head to this.
Grade- B+

5. Nitro
Co-Produced By: The Bomb Squad

You could not mistake this thumpin' beat for anyone else but The Bomb Squad, who were hip hop's top production team at the time, largely based on their work with Public Enemy. LL was also feeling it here, plus the James Brown (Funky Drummer) and Funkadelic (Not Just Knee Deep) samples were utilized well.
Grade- A

After pioneering and starting the "hip hop ballad" with "I Need Love," that certainly wasn't the last time he would make such a song. On this one, love was definitely in the air, however, I felt he tried a little too hard for the ladies.
Grade- C

LL's smooth and self centered delivery was on par with the equally smooth beat. In short, he was superior to you and whatever you could do, he could do it better. I was always a big fan of this song. It's not one of his best, but still dope.
Grade- B

8. Why Do You Think They Call It Dope?

LL is not talking about dope in the drug related sense, but rather using it as a metaphor throughout to show how "dope" he is.
Grade- B+

9. Going Back To Cali
Produced By: Rick Rubin Rick Rubin brought the magic touch for this beat, incorporating entertaining elements of hip hop, rock, and jazz; those horns were amazing. Looking back, I don't think anyone but LL could've rocked this beat the way he did. Classic.
Grade- A+

10. It Gets No Rougher
Co-Produced By: The Bomb Squad

Truly an apply titled song. I think I'll have more to say about the Bomb Squad's role on this album later.
Grade- A What does Tina, Brenda, and Lisa (a waitress) all have in common?? Check the song title. LL is hilarious on this appropriately titled song, a popular one with the fellas obviously, which finds him checking out the aforementioned women something seriously (even though he has a girl, lol). He even gave it a little story as well, with a funny ending.
Grade- A

I get what LL was aiming for here, but man was this song about 2 minutes too long. "You're My Heart" was the superior song, but that's not saying much.
Grade- C-

Remember when 900 numbers were in style? I do, although I never called one. LL is the smooth operator and owner of his "line," receiving calls from two young ladies who wanted him to "buss some funky rhymes" and the other wanting to know "what he does when he's coolin out." Good and to the point, plus one of the ladies had to get off the phone quick because her man was just getting home. Ok then.
Grade- B

Again, I understand where LL was coming from here (accepting the fact that the lady in his life and himself are different), but a song like this, the album's third ballad, would've been much more effective had it lost about 2-3 minutes.
Grade- C

In short, LL had no time for jealousy in any form. An ok song for the most part.
Grade- C Another classic, which would still rock a party today (as well as the remix which comes a year later).
Grade- A+

17. Def Jam In The Motherland

Listen as LL takes his brand of hip hop to the Motherland.
Grade- B

I'm trying to refrain from calling this song filler, but let's just say the previous song would've been the better closer to this album.
Grade- C-

Although this album is home to classics such as the original version of "Jingling Baby," "Big Ole Butt," "Going Back To Cali," and "Droppin Em," just to name a few, this album was met with a very mixed reaction not too long after its release. You can attribute that to a slight change in LL's style, as well as the three ballads, which brings the album's quality down a bit. I'm not against hip hop ballads (never have been), but they can be very good if done right and not too frequently. It's a good album overall, but clearly not one of his best. Lyrically it was more of the same (which wasn't a bad thing) and the production was decent. Speaking of the production, can you imagine if the Bomb Squad produced all the songs here? It would've totally been a different album to say the very least and with hindsight being 20/20, LL would've been much more energetic and we'd probably be talking about it in a different way today. By the way, in what would become a trend, whose bright idea was it to include the classic Kool Moe Dee diss record "Jack The Ripper" on the cassette and NOT the CD? Not a good decision in my book. And it doesn't end here I'm afraid. During a performance at the Apollo Theatre in '89, he was soundly booed and again, most fans weren't too pleased with this new direction, and with that came the unfortunate "sell out" term. How would LL bounce back from this? I'll cover that when we get to 1990.