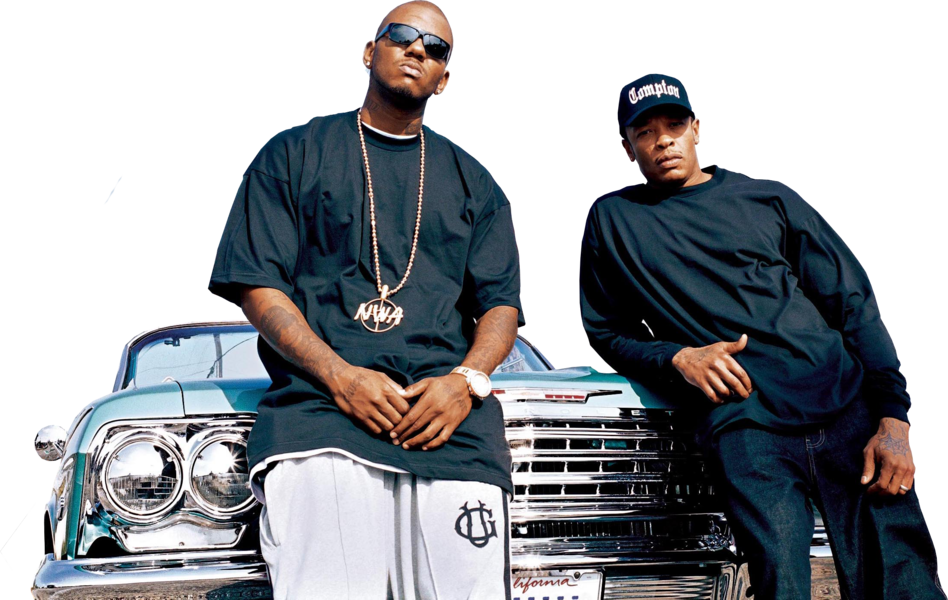 This pic above spoke volumes. I remember my cousin Andre having this posted on his wall (if my memory serves me correctly), and he was HYPED for The Game's debut. Just by looking at this pic, I was hyped too, and this was before I had heard anything from Game. Imagine that, being hyped for an artist you hadnt heard yet (more on that later). This look back at Game's discography will not be a "journey" like my recent 50 Cent posts were, respectively. I've always been a fan and I remember saying at one point I was going to create something for him, and here we are, starting with his debut! I went crazy when I first heard this Dr. Dre and Scott Storch produced BANGER and it was THE best way to start this album. Whenever I'm bumpin' this in the ride, the volume has to be cranked up to 18 (or 20); it simply KNOCKS, no doubt about it. Game is asserting himself lyrically, and of course letting you know where he comes from, what he represents, and what mark he planned to make in hip hop as far as the West Coast was concerned.
*5 out of 5*

"They say sleep is the cousin of death, so my eyes wide open/Cause a dream is kin to your last breath"

The subject of "dreams" has been covered before in hip hop, but what makes any song on the matter is good when you get a fresh perspective, and that's what Game does here. Not only is he talking about his own dreams, but he makes it clear that before their untimely deaths, Left Eye, Aaliyah, Martin Luther King, Jr., just to name a few, had dreams too. Excellent song. (And I'm sure Game knew that Dre's "2001" dropped in 1999.)
*5 out of 5* "I ain't have 50 Cent when my grandmother died, now I'm goin' back to Cali/Wit' my Jacob on, see how time fly?"

"From the beginning to the end, losers lose/Winners win, this is real we ain't got to pretend" -50 Cent

Another excellent song right here, and it takes me back a bit because my mom was a big fan of this; I'm still not sure if it was because she liked Game, the beat, or both. "Hate it or love it, the underdogs on top," true words in 2005.
*5 out of 5* This is another banger right here, courtesy or Dre and Mark Batson. I wouldn't say this was made for the smokers, but I guarantee you some cats out there probably still get bent when bumpin' this one.
*5 out of 5* This was my introduction to Game and I recall really feeling this one when I first heard it. Much like "Hate It Or Love It," this joint blazed radio and TV in 2005, plus it still bumps in the ride and at the parties.
*5 out of 5*

Although Game was still coming into his own as an artist, he gives the vibe that even at this point, he's seen and done it all, and with or without the external support, he doesn't need it. The Faith Evans assisted, Havoc produced song makes it points.
*4 out of 5*

"I seen it all through the Range tints/Got niggas doin' life in the state pen, so I dread like Jamaicans"

"I handle bars, you ain't gotta ride a bike/To beat Game in his skills, here go some training wheels"

"The next Hova, from the home of the best doja/Makin' all that racket, I got the U.S. Open"

Another dope song, with Game bringing his Compton style over the signature sound of Timbaland.
*5 out of 5*

If we could turn back the hands of time; if we could revisit the past; if we could do certain things all over again, what would we do? Considering my nostalgic state of mind most of the time, I frequently think about these things. Game's perspective is pretty good throughout, and when songs like this are done right, it's a winner in my book.
*5 out of 5*

I LOVE that hook right there, which defines this song, and of course many props for name dropping some of my favorite albums of all time. Game simply WORKS this DOPE beat like a charm. In addition, I'm not sure why a seemingly random line on this song would be a shot a Jay-Z (as asked by Ed Lover), but it's all good.
*5 out of 5*

Hi-Tek provided a NICE beat, complete with equally nice lines from Game, however, Tony Yayo was totally out of place on this song. If not for his verse, this would've been another "5 out of 5" song.
*4.5 out of 5"

This "Gangsta, Gangsta" inspired banger is dope and fast paced.
*4 out of 5*

I'm sorry Game but I agree, Eminem did kill you, figuratively speaking, on your own song, but that is NO knock whatsoever. This banger loves the system too.
*5 out of 5*

Focus did a great job capturing a TRUE West Coast sound for this Nate Dogg assisted song. Pretty good all around.
*4 out of 5*

Holy hot damn, even though this was another joint for the ladies, this my friends is a banger and the previous song PALES in comparison. Ms. Mary J. Blige was at home on this one as you would expect.
*5 out of 5*

Speaking as a father myself, I appreciate songs like this. Game talks about the birth of his son and all of the obvious emotions involved. I'm sure his first born will hear this song as he grows older. Thoughtful closer.
*5 out of 5*

Whew, before I get to my thoughts on the album, I want to speak on something first: the name dropping. If there was one thing that Game was taken to task for at the time, it was his name dropping. Now, I will admit that he did it on a constant/consistent basis throughout the album, but the production and lyrics were so dope that it didn't bother me too much; he still could've toned it down in spots. And speaking of the album, this was a hell of a debut and I credit Game for bringing life back to a stagnant West Coast scene in 2005. Not only was he dope (and inspired) on the mic, but with the backing of G-Unit, Aftermath, respectable guest appearances (except ONE), and some of the best producers in hip hop circa 2005, a strong buzz and presence on the radio and TV, how could this album not be a winner? And win is what it did, moving 585,000 units in its first week, going on to sell 5 million copies worldwide, his best selling album to date. It's also one of my top 10 "post 1999" favorite albums of all time, a well mastered one too. Awesome album and personally it's 5 stars in my book.