In 2006, it was a rather interesting time in the careers of Havoc and Prodigy. Previously, after their tenure on the celebrated Loud Records, they dropped the dope yet unnoticed "Free Agents Murda Mixtape" and the underrated, but highly slept on "Amerikaz Nightmare" came out in 2004. Some may have said a change was needed for Mobb Deep. That change would be signing with 50 Cent's G-Unit Records. This move received mostly mixed feedback, while personally I thought it was a good move at the time. Speaking of time, I will say going into this revisit it has not been kind to this album. How does it manage to hold up some 8 years later? Let's go back to 2006 shall we. 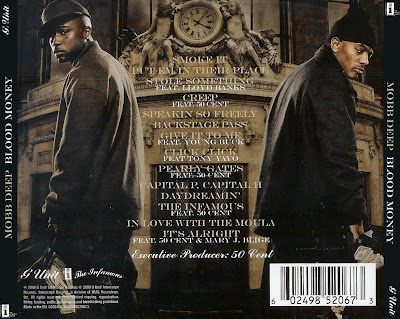 Release date: May 2, 2006 (I initially bought this album on its release date, but I'll save the rest of this "story" for later.)

1. Smoke It
This was a dope opener, mostly for Havoc's equally dope beat and his verse. Prodigy, on the other hand, says nothing of note. I have a feeling I'll be saying that A LOT on this album.
*4 out of 5*

2. Put Em In Their Place
Produced By: Sha Money XL and Ky Miller

Subject wise, this is nothing we haven't heard before, but the beat is a good one.
*3 out of 5*

Good song right here, which could've been better had Havoc's beat been tweaked just a little, in reference to the background sounds. Banks had the best verse.
*3.5 out of 5*

The beat to this reminds me of "Stroke of Death" from Ghostface Killah's "Supreme Clientele,: in which RZA was just messing around in the studio one day, next thing you know something that probably wouldn't have been included on the album otherwise ended up making it. I feel Havoc did that here, likely just being in the studio one day, messing around on the piano, and this is what we got (I'll post the instrumental so you can hear the effects). The song itself is nothing special, something we have heard done before and better, plus 50 outshines Hav and P on their own song.
*2 out of 5*

A song like this, even with its apply titled nature, was straight out of the G-Unit playbook at the time, and it was not a good fit/look for the Mobb.
*2 out of 5*

7. Give It To Me
Featuring Young Buck
Produced By: Profile

Aside from an ok beat, this was bad, plus a waste of a Young Buck appearance. This is another song straight out of the G-Unit playbook (a joint for the ladies I might add) and it simply does not fit a duo like Mobb Deep. And did Hav really say "I'm tired of finger fuckin this phone?" Let's move on from this.
*1 out of 5*

The beat is the sole reason behind this song's rating. Other than that, Hav and P's verses were forgettable, especially the latter, and as usual Yayo brings nothing to whatever he's on.
*2 out of 5*

We have heard the "heaven and hell" type songs before (and done better I might add). Prodigy's verse was more over-aggressive and apparently controversial, so much so that some of his lines were censored. I won't repeat them here. Next please.
*2 out of 5*

10. Capital P, Capital H
Produced By: Product and Whitton
Man, Hav and P fully embraced the G-Unit style, and that comes across in full on this one, also evident by the song title. Hav's verse wasn't too bad, but Prodigy's was comically bad, especially with him spelling out things at the beginning. It's like he was spelling things for the sake of doing it rather than trying to put together something witty. Forgettable.
*2 out of 5*

Again, songs like this have been done before and better. I get what they were going for here, but it came across as so uninspired you'd have to ask why even bother to make a song like this.
*1.5 out of 5*

12. The Infamous
Featuring 50 Cent
Produced By: The Alchemist

Now THIS is more like it, one of the FEW songs on the album that captures the true Mobb sound, fittingly the album's best song. I also found it interesting that it took a dope Alchemist beat to bring out Prodigy's best verse on this album.
*4 out of 5*

13. In Love With The Moula
Produced By: Jonathan "J.R." Rotem

The almighty dollar is the equivalent to a good woman for Hav and P on this one. It's decent, but "Money Is My Bitch" this is not.
*2.5 out of 5*

This is another song for the ladies. Granted it's better than "Give It To Me" and "Backstage Pass," but that's nothing saying much at all. Ms. Blige certainly wasn't a stranger to songs like this.
*3 out of 5*

*15. Have A Party
Featuring 50 Cent and Nate Dogg
Produced By: "Fredwreck" Farid Nassar The first of two bonus tracks, this was also included on the "Get Rich Or Die Tryin" soundtrack and it's very good. This is one of very few songs from Mobb Deep that you could actually play either in a club, at a party, or both, and it not sound out of place.
*4 out of 5* Aside from another comically bad verse from Prodigy, this is another very good song and one that would not feel out of place being played at a party, club, or both. You also could not mistake this beat for anyone else but Dre.
*4 out of 5*


I'll start with the rest of the story I was telling after the intro. I did buy this on its release date and I was SO disappointed that I went back to that same store (FYE) the NEXT day and traded it; I was NOT happy with this album. Basically for completion sake (and I've always been a long time fan of Mobb Deep), I copped it again in the early part of 2010.

Now let's talk about the content. Oh man, time has not been kind to any aspect of this album. Overall, this is clearly the worst album of Mobb Deep's career and when you have 5 dope songs (with 2 of those being bonus tracks) out of 16, that's not good at all. It's like they totally went against their own sound to fit the G-Unit sound instead of doing their own thing, which ended up backfiring pretty strongly. Speaking of G-Unit, history has shown that this move was not the best decision for their careers; maybe it was in the short term but definitely not the long term, and I won't be surprised if 50 made more off this album (due to his executive producer credit) than they did. Production wise it's hit or miss throughout and lyrically Havoc and Prodigy were so far removed from their peak years of 1994-2000 that you couldn't miss it if you tried. Those 5 aforementioned songs alone make this album a somewhat generous 2.5 stars, everything else you can basically take a pass on. I would ONLY recommend this if you have an hour or so to kill and you've never checked it out, otherwise, do not bother.
Posted by Wayne M. at Tuesday, May 27, 2014