After the critical and commercial success of his 1994 debut, "Tical," it was clear that Method Man was the biggest star in the Clan. After "Tical," he still held up his end when it came to his other appearances, in and outside the Clan, and he certainly kept this up throughout his career. Today's agenda will be his 1998 sophomore album, "Tical 2000: Judgement Day." This album wasn't as heavily anticipated as "Tical," and throughout the years it has received its shared of feedback, mostly mixed. How does it hold up today? Well, we'll certainly take a look at that! 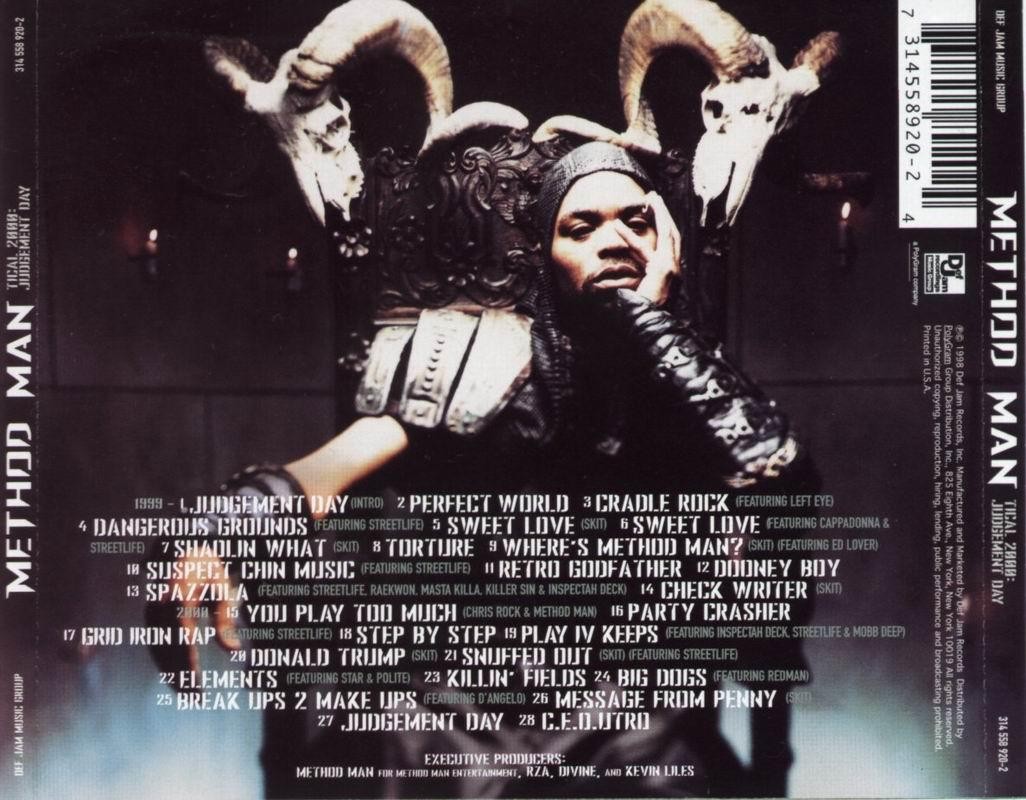 
1. Judgement Day (Intro)
Anticipation for the year 2000, i.e. the "millennium," was at a fever pitch and never was that more clear than in the late 1990s. This intro finds Meth with the 10 second countdown, only for a "massive explosion" to take place before he gets to say "Happy New Year" in full. Now, when I first heard this, I was legit terrified, which leads me to a small story. On December 31, 1999, after watching the B.E.T. special "Notarized: The Top 100 Videos of all time" (I can't recall the actual title), I anxiously awaited the countdown to 2000. I had the TV on in the background, and at the same time, I laid across my bed with the pillow over my head, smh+lol. When the countdown was over, I hopped up and was excited! I was still alive and well, ready to start another year, and yes, I bought into alleged "end of the world" talk when the year 2000 arrived. ALL of this brings us to.....


2. Perfect World
Produced By: The RZA


"The children are the future, and Wu-Tang is for the babies!"

Yes indeed, and I recall similar words being spoken by the late ODB as well. I always felt this was a dope, fast paced opener, with a bass driven track thanks to RZA and tight lyrics by Meth. After that intro we got, this was the best way to officially start the album.
*4 out of 5*

"Rock a bye baby from the roof top
When the guns blow, ya cradle gets rocked
When the earth quakes and the sky starts to fall
Down will come MCs, fake shit and all!"

God rest her soul, it was a smart move for Ms. Left Eye to just contribute to the hook with Meth, as well as the song's ending words. I say this because I feel a verse from her on this one would've sort of been out of place. With that being said, Meth rides this one nicely. To this day, I'm not sure who LB Da Life Bringa is, but this was likely the only beat he ever produced.
*4 out of 5*

Meth and Street Life often had very good chemistry together, and that fully comes across on this True Master produced banger. This won't be the last of Street Life on the album either.
*4 out of 5*

This is what we would call "Wu Love" in the purest form. Cappa's verse used to have me laughing a bit back in the day.
*3 out of 5*

This is perhaps one of the dopest skits you'll ever hear. Again, Meth rides this beat nicely with supreme confidence.

"Flame on, I rain fire, when Johnny storm/I'm shockin' like live wire, you have been warned"

Another dope, fast paced song. I'll tell you one thing, Meth was really feeling it on these beats. On this one, you can tell a smile was in his voice during the hook while continuously saying "torture, muthafuckin' torture."
*4 out of 5*

9. Where's Method Man? (Skit)
In true Ed Lover form, lol, he sort of goes in on how he really wanted another album from Meth, justifiably so after "Tical."

The very good chemistry between Meth and Streetlife is still in effect on this one. "You should keep ya chain tucked in, and should neva run ya mouth wit a suspect chin, now lay it down!" Indeed.
*4 out of 5*

11. Retro Godfather
Produced By: The RZA

While I always appreciate a "retro" sound, I felt Meth was a little too retro on this one. When I first heard it, I didn't know what to make of it, but today, I'll say it's ok, nothing more or less.
*2 out of 5*

12. Donney Boy (Skit)
A VERY brief skit with Meth and his son Shaquan (I think I spelled that right.)

At the beginning, Masta Killa said "Deadly Melody part two". Well, it does come close to that classic from the "Wu-Tang Forever" album. And to borrow a title from Busta Rhymes, this joint was rhymes galore over a nice, piano laden track courtesy of Inspectah Deck, who was really starting to explore more with the beats at this point.
*5 out of 5*

14. Check Writer (Skit)
"This is the check writer. I'm gonna be the check bouncer in a second if you don't give me this fuckin album!" Lol.

15. You Play Too Much (Skit)
Featuring Chris Rock
Oh man, this hilarious skit is one of my favorite skits of all time. Chris Rock introduces Meth with every (AKA) name in the world and will NOT stop for nothing. Meth goes so far as to "fire shots," "call security to unleash dogs," and "lighting him on fire," but Chris CONTINUES. Funny.

"Ah shit, not these niggas again. Ay yo listen, I'm only lettin five of you muthafuckas in here tonight. If ya man ain't on the guest list, he enter the back of the fuckin line. And you know another muthafuckin thing, I don't give a fuck if a bitch spill a drink in this muthafucka tonight, I'm kickin all y'all the fuck outta here!!!!"

Wow. You already know what to expect when the Wu enters a club. Smoking, drinking, partying, and the whole nine no doubt. I still trip out every time I hear those lines above. Either way, this is another banger right here.
*4 out of 5*

The energy from Meth and Streetlife was commendable on this one. It's decent, but not on the level of "Dangerous Grounds" and "Suspect Chin Music."
*3 out of 5*

"Welcome to the Wheel Of Fortune, where Pat don't say jack (Sajak)/Bring it to these cats often, the biggest payback"

".....time for some action/Check my reruns and see What's Happening"

Nice little banger right here. Meth flowed nicely over Erick Sermon production as well as Redman did. More on this dynamic trio later.
*4 out of 5*

The dopeness continues with this Wu-Tang/Mobb Deep collabo. Also towards the end of the song, there was what seemed to be an unplanned moment, which saw Meth having another moment with his son. The way it just cut in and out, briefly, came off like it was not supposed to happen. It doesn't ruin the song though.
*4 out of 5*

This dope skit was a showcase for Streetlife and he brings it over a tight beat by Mathematics.

Although Meth is on this one, I feel this was more or less a showcase for Star & Polite, who both do a decent job.
*3 out of 5*

To this day I still love playing this one in the ride because True Master's beat simply knocks. And of course Meth comes through with three tight verses, one of my favorites on this album.
*4 out of 5*

What do you get when you put Meth and Red on a bangin' Erick Sermon track? Wu-Tang/Def Squad dopeness. This would also appear on their "Blackout" album in 1999.
*5 out of 5*

Even with the Wu-Tang touch, once you heard a song like this, you've heard them all. It's still good though.
*3 out of 5* I guarantee that most of you have probably forgotten how dope this one is. I feel Meth experimented with his sound to great results on this title track.
*4 out of 5*

28. C.E.Outro
"Thanks for coming out, God bless you, good night." You're welcome Mr. Russell Simmons.

In my view, time has been kind to this album, and as a sequel to 1994's "Tical," this was a winner from Meth. The production was very good, lyrically he was still sharp and inspired, the guests contributed nicely, and the hype surrounding it propelled this one to platinum status almost one month after it's release. Now, some may say that there were too many skits on the album. That is true, however, in the case of this album, they don't take away at all and most of them add to it. The seven appearances by Streetlife weren't out of place either, because being one of Meth's proteges at the time, this was a way to get his name out there more in preparation for his debut. Overall, while not a classic, this is a strong, 4 star album. At 28 tracks, including skits, I don't feel it's that lengthy of an album, as it flows well from beginning to end, with the only misstep being "Retro Godfather." A strong recommendation to those who haven't heard it before, and for those who own it, revisit it when you get a chance. It still holds up today.
Posted by Wayne M. at Wednesday, April 30, 2014