A review of "The Infamous Mobb Deep"

This is an album that I've been anticipating for quite some time now and it's finally here. As a long time Mobb Deep fan, I haven't had this much anticipation for one of their albums since 2001's "Infamy". In addition to several solo projects from Havoc and Prodigy, a brief falling out between the two and a 3 year prison sentence for Prodigy, this will be their first studio album since 2006's "Blood Money". Also as an added bonus, a second disc is included of unreleased material from the recording sessions of their 1995 "Infamous" album. More bang for our bucks! I also really like this album cover, which is a complete throwback to 1995, nice touch right there. Let's get to the album! 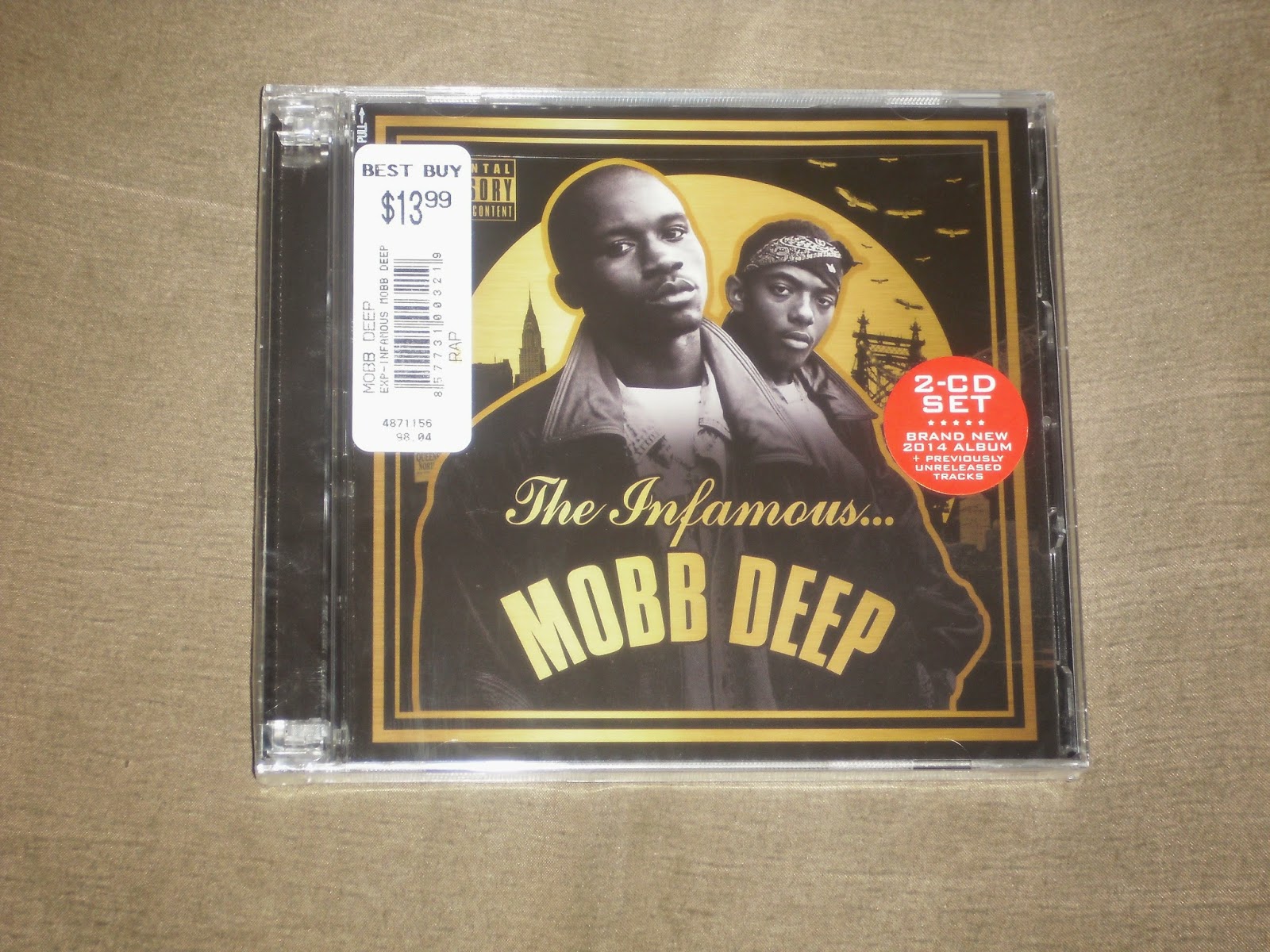 
1. Taking You Off Here
Produced By: Havoc

A dope opener featuring an inspired, energetic Havoc and Prodigy. This is an example of how any hip hop veterans should begin their albums, with an updated sound that still features throwback aspects without sounding too dated. Very good way to start the album.
*4 out of 5*

2. Say Something
Produced By: Illmind

Havoc and Prodigy were feeling it on this Illmind produced banger. Havoc also starts this off so proper, sending warning shots to any fresh faces in the game not aware of the Mobb sound. I like this one right here.
*4 out of 5*

3. Get Down (Featuring Snoop Dogg)
Produced By: Havoc

For the first time ever pairing of Mobb Deep and Snoop Dogg, this was dope as hell. Yes, there's sort of a party vibe to this one, but it's still a banger, enough to please the hardcore and casual fans.
*4 out of 5*

Illmind's beat was seemingly a little all over the place, but overall it's a good song, nothing more or less.
*3 out of 5*

Timeless. Priceless. Flyness. No doubt Prodigy. Considering their history, I agree with this. Timeless indeed.
*4 out of 5*

6. All A Dream (Featuring The Lox)
Produced By: Om'Mas Keith

Now, long time fans may not be as accepting to this song, mainly due to its production, and of course it's the first true Mobb Deep/Lox collaboration. Going into this, I was expecting something a little more aggressive, however, I commend them for likely wanting to do something different by adding a fresh touch to an already covered topic, that being having a dream and ultimately still living it, complete with the Notorious BIG sample. Give this one a chance, it's good.
*3.5 out of 5*

I wouldn't have guessed that we would get a track for the ladies on this album, and this is it right here. With all due respect, I'd rather not hear a track like this on a Mobb Deep album, even if it is a little something different. let's move on.
*2.5 out of 5*

Look at that title and tell me this is not vintage Mobb Deep right here.
*3.5 out of 5*

9. Check The Credits
Produced By: Illmind

"You in the presence of winners, keep ya eyes on this" -Havoc

Another fast paced banger, solidifying their status (if they haven't done so already). All you gotta do is just that, check the credits/track record. It speaks for itself and this song confirms that.
*4 out of 5*

10. Gimme All That
Produced By: Havoc

This is more of that vintage Mobb Deep sound, and yes another banger.
*4 out of 5*

11. Legendary (Featuring Bun B and Juicy J)
Produced By: Havoc, Boi-1-da and The Maven Boys

Ok, allow me to get this out the way. Most of you familiar with my work know I'm not a fan of Juicy J. Listening to his verse, objectively, he adds NOTHING to this, delivering the same ol "rhymes" and almost going off beat, totally out of place on an otherwise DOPE song, featuring another first time ever collaboration between Mobb Deep and Bun B, and they have a strong case to be called legends.
*4 out of 5*

12. Lifetime
Produced By: The Alchemist

Considering their longevity in hip hop (almost 25 years), I can see why it would feel like a lifetime. It definitely does and this is a pretty good Alchemist produced joint.
*4 out of 5*

13. My Block
Produced By: Kaytranada

It goes without saying that we have heard songs like this before, however, Havoc and Prodigy makes a very familiar topic sound so fresh.
*3 out of 5

**The following songs are on the deluxe edition of iTunes.

This banger was also included on their "Black Cocaine" EP released 2011. My guess is that they included it here for those who may not have heard it before, plus it's dope.
*4 out of 5*

Mad creative points to Havoc for this "water induced", Alchemist esque beat, with a nice soulful touch as well. I was just waiting for a Roc Marciano verse, and trust me this sounds like a beat tailor made for him.
*4 out of 5*

16. Get It Forever (Featuring Nas)
Produced By: The Alchemist

Another inclusion from the "Black Cocaine" EP, likely for the same reasons listed on song 15.
*4 out of 5*

(Update: I had the opportunity to listen to this album prior to its release. I copped the double CD on its release date, however, in one of the most mind boggling omissions I've seen in a long time, Snoop's verse is inexplicably NOT included on the CD version of "Get Down", neither is The Lox included on "All A Dream". Granted, the guest verses are not spectacular (but still very good), but this is a disappointment that their verses are not included with NO explanation. Apparently they ARE included on the iTunes version of this album. Again, mind boggling to say the least.)

All produced by Mobb Deep

1. Eye For An Eye
Featuring Nas, Raekwon and Ghostface Killah

Oh man, had I heard THIS back in 94 or 95, I would've lost my damn mind! The version that made the "Infamous" album was 4:48 and only featured Nas and Rae. This version, clocking it 6:48, featured different/unreleased verses by Havoc, Prodigy and Rae, Nas' verse was the same, and an unreleased Ghostface verse. DOPE as hell.
*5 out of 5*

2. Skit
This had to have been an untelevised edition of Yo! MTV Raps. Ed Lover interviews Mobb Deep, Nas and Raekwon, featuring a brief freestyle by all four over Monica's "Just One Of Dem Days". Classic stuff right here.

How could THIS NOT have made the "Infamous" album??? Hot damn this is fire. I'm honestly not sure where I would've placed this song on that album if I had my way, but man, this is dope.
*5 out of 5*

My guess is that this was the first version of "Give Up The Goods (Just Step), but realizing the nature of the song, they went back in the lab (with Q-Tip) and re-did the entire thing, and that classic version is the superior of the two. This one also features an unreleased Big Noyd verse.
*4 out of 5*

5. If It's Alright
Featuring Big Noyd

6. Skit Mobb Deep 1995
I can't make out who the interviewer is on this one. Another brief interview prior to the release of "The Infamous".

7. Survival of the Fittest

I've been looking for this one for a LONG time, and it's here, remastered and everything! The first part of this classic is just as dope as the version that made the "Infamous" album.
*5 out of 5*

This was more or less the "first draft" of the song until they reshaped it for the version that appeared on the "Infamous" album.
*4 out of 5*

One thing that these cats always did well was hold down and represent where they were from, Queensbridge. The MC Shan samples were a nice touch on this one, which took me back to 94 when you take the entire sound here into consideration.
*5 out of 5*

This version was better (and shorter) than the previous one.
*4 out of 5*

13. We About to Get Hectic (Featuring Twin Gambino)
I'm sure this appropriately titled song was the debut of Twin Gambino. More good stuff.
*4 out of 5*

14. The Infamous
Havoc and Prodigy used some of the lyrics here in other songs on the "Infamous" album, specifically Havoc's verse, which he used on "Eye For An Eye (Your Beef Is Mine)".
*3 out of 5*

Allow me to speak on the first disc to start. Lyrically (and overall) it doesn't break any new ground (Havoc has gotten better on the mic in recent years and Prodigy has been on a roll since his previous joint album with Alchemist), but hot damn does it sound fresh. Something I've been thinking about recently, going back to the new Onyx album I reviewed recently, is that most of the veteran MCs' (those who have been in the game for 15 years or longer) latest music sound SO fresh compared to everything else that's out today. The average fan may listen to this Mobb Deep album, thinking they're saying nothing new. Be that as it may, but considering how hip hop is nowadays, I feel sticking to what you do best/staying in your lane is the most creative, successful thing you can do, even if those things don't bring the sales and attention. Continuing on with this album, it's VERY good. I could've done without "Low", plus the Juicy J feature and the omission of Snoop and Lox's versions on those respective songs, but this is Mobb Deep's best album since 2004's "Amerikaz Nightmare", and I kinda like this album more than that one. On its own, I would give it 4 stars.

The bonus, 1994 Infamous Sessions is as dope as I anticipated. Whatever you want to call those unreleased tracks, the fact that Havoc and Prodigy decided to open the vault and release them, no matter how long it took, is a good thing. I feel they forgot just one, and that's the first part of "Shook Ones", but it's all good. 4 stars if I were rating it separately.

My final rating for this is, including the Infamous Sessions, is 4 stars. Much props and respect to Havoc and Prodigy for this release.