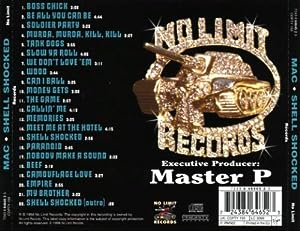 Nice opener right here. Mac drops a dope verse highlighting his type of chick, then Mia comes through with a commanding verse, assuming the title of this on a lyrical level.
*No Limit classic*

2. Be All You Can Be (Featuring Fiend, Silkk The Shocker and Mo B. Dick)
Produced By: Mo B. Dick

One thing that was slightly underrated about No Limit was their more positive songs and this is one of them. It became an issue when said songs were turned into a series of cliches, lacking substance and creativity. Silkk was SLIGHTLY tolerable here.
*Very good*

This was truly tailor made to rock a party, circa 98. Mac was really feeling it here and P surprisingly wasn't too bad with his verse.
*Excellent*

"I cross my heart and pull the trigga/Dear God if I die, let me see the eyes of my killa so I can haunt that nigga" -Mac

5. Tank Dogs (Featuring C-Murder and Fiend)
Produced By: Craig B

A very good precursor to the Tank Doggs album that would sadly never see the light of day (the supergroup also included Snoop, and more on C's "$50" nickname when I cover Magic's album).

Excellent song. Mac tells the coming of age story of a young man (from the age of 15-17) and what happens when you live life in the fast lane. It's easy to follow and understand. Gotta slow down indeed.
*No Limit classic*

This banger was just begging for a Too $hort guest appearance. I'll give you one guess as to what this song was about, lol.
*Very good*

"Wooo" was one of Mac's trademark catchphrases, if you will, so that was turned into a hype "soldier song" here. Mac and Mia dropped good verses; Snoop came through with a laid back, smooth verse admist all the rowdiness; Big Ed and Kane & Abel's verses were ok, but man Serv On's verse was horrible. He seemingly insisted on spelling out things during this verse and failed at trying to be dope. A word on Serv On, if I may. I talked about this before, but Serv On was simply NOT good. If he ever sounded good, it was usually due to dope production and being alongside much more superior artists. Either way, minus Serv On's verse, this was very good.

9. Can I Ball (Featuring Soulja Slim)
Produced By: O'Dell

A pretty good collabo with Mac and Slim. You could tell they were having a good time making this.
*Excellent*

Money brings good and bad, nothing we haven't heard before.
*Good*

11. The Game
Produced By: KLC
This was basically another look at "the life" and how things don't/can't change.
*Very good*

This was the first of three songs for the ladies, one of many examples of how men can get when the sexual urges comes calling. Mac also puts this in sort of a story form here too.
*Good*

Even No Limit had a nostalgic side, which impressed me, and that's the theme here, featuring a good verse by C.
*Excellent*

It all goes down at the hotel, the spot. Nothing more to say here.
*Average*

Man, my cousin Andre would probably lose his mind if he hears this today. This is likely the best song on the album, as Fiend and Mac try to one up each other throughout, creating some friendly competition in a dope note.
*No Limit classic*

I would've preferred someone other than Silkk on the hook, but considering all that is said was "they got me noid, they got me noid, they got me paranoid," it was fine. I like Mac's form of storytelling. He's in a paranoid state of mind, split up into two parts. The first part finds him trying to escape a gunfight, only to apparently shoot his brother by mistake, and the second part sees him under the impression that someone is after him, but it turns out to be #1 fans who went the stalker route. He even hints at all of this being part of a dream too.
*Very good*

It's a robbery in progress, as Mac brings along some No Limit help. To this day, I still couldn't tell you who had the best verse between Mac, Fiend and Magic; they were all pretty amped here. New (at the time) female duo 2-4-1 literally brought nothing to this song.
*Very good*

If you had beef with Mac, this song showed in detail how he handled those situations. More storytelling vibes here.
*Very good*

This was more or less a continuation of "Callin Me."
*Good*

Well, with Mac bringing somewhat a freestyle vibe to this, it was good, but I still have an issue with the following line:

"I could give a fuck bout hip hop, the culture, or the cause/The shit is watered down like a scene from Jaws"

Now for someone who eats, sleeps and breathes hip hop culture, this was not impressive to say the very least. If this was his effort to be witty, he failed. And with lines like the ones above, why were you even on this track? Why did you take the time and effort to make, up to this point, an excellent album? It made no sense to me. In another senseless bit, instead of the song ending after Mac's verse, KLC chants "we No Limit solidiers, I thought I told ya". Seriously, was that needed at the end of this? Again, made no sense.
*Good*

This was a personal, heartfelt dedication to Mac's brother. You can never go wrong with a song like this, especially when it's done right.
*Excellent*

22. Shell Shocked (Outro)
This had to have been a BRIEF outtake of "Murda, Murda, Kill, Kill."


"Shell Shocked" was the second best No Limit album in 1998, 4.5 star material. Mac was another underrated artist on the label and he definitely had a bright future ahead of him, but a very disappointing sophomore album (1999's "World War III") and a conviction on September 21, 2001 for manslaughter charges (with a 30 year to life sentence) brought whatever momentum he had to a complete halt. This debut showed that he had potential, and now when I think about it, he may have been the best artist on No Limit lyrically, albeit challenged by Fiend. Stay strong Mac and keep your head up.
Posted by Wayne M. at Tuesday, March 04, 2014