The journey of the Native Tongues continued into 1989. After the success of the Jungle Brothers' debut in 88, "Straight Out The Jungle", it was time for De La Soul (Trugoy, Maseo and Posdnuos) to step on the scene and bless hip hop with their debut. 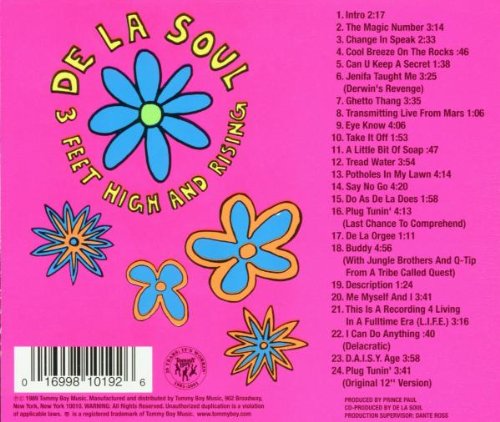 
All songs produced by Prince Paul

1. Intro
Lol, quite the funny intro to begin things. De La and Prince Paul (I also believe Prince Paul was playing the role of the host here as well) act as contestants on the "3 Feet High And Rising" experience (or game show, lol). This becomes a recurring theme throughout the album as the contestants try to answer specific questions.

Led Zeppelin's "The Crunge" is sped up and utilized nicely by Mr. Paul for this fast paced song. "3" definitely is the magic number when it comes to De La.
Grade- B+

Another good, fast paced song, which sees The Monkees' "Mary Mary" sped up as opposed to the song before it. I like those small touches right there.
Grade- B

4. Cool Breeze On The Rocks
This DOPE skit certainly "rocked". If my words are correct, this may be the first time in hip hop that the MPC3000 was used, definitely a creative use of the word "rock"  on this one.

5. Can U Keep A Secret
This may be a song in the technical sense, but respectively this is an extended skit if you ask me. Quite funny too.

Pos and Trugoy's adventures with Jenifa are told in a humorous, but good form, and again, songs like this were commonplace in the 80s.
Grade- B+

Trugoy and Pos put their unique, but still entertaining, touch on the happenings of ghetto life.
Grade- A

8. Transmitting Live From Mars
This indirectly leads us into.....

Sample check
This is "feel good" music right here, from the lyrics all the way down to the sampled beat courtesy of Lee Dorsey ("Get Out Of My Life, Woman").
Grade- A

10. Take It Off
Another funny, extended skit.

11. A Little Bit Of Soap
This was more or less the conclusion of "Take It Off", lol.

Sample check
This apply titled song is very creative (much like this album), in that they go in depth on "treading water," but from the perspective of animals. This is NOT bad at all, it's dope.
Grade- A+

Well they definitely didn't like the potholes in their lawn, and this song explains why. Then again, I don't think any of us would like it either, lol.
Grade- B

"I heard shoving is worse than pushing/But I'd rather know a shover than a pusher cause a pusher's a jerk!" -Trugoy

Take a look (and listen) to the four samples above. All of them were creatively used by Prince Paul in this classic, one of my favorite De La songs. I bumped this one four times in preparation for this session!
Grade- A+

15. Do As De La Does
They're just cold havin fun on this one!

Another De La classic right here, which finds both Trugoy and Pos representing their style to the fullest (it's not the Pos solo like you would think, and that's no knock at all).
Grade- A+

17. De La Orgee
This skit right here may have been the first "sex skit" on a hip hop album. They don't go too far, but it's another funny moment.

Sample check
The CLASSIC remix, which I will provide here, may be the most known of the two, but the original version is just as dope. All involved are clearly having the time of their lives making these classics. This is the Native Tongues in their true form.
Grade- A+ (for both the original and remix)

19. Description
Along with Q-Tip, this "limerick" influenced joint leads us into.....

You CANNOT call yourself a De La Soul fan if you've never heard this one, another straight classic.
Grade- A+

22. I Can Do Anything (Delacratic)
More hilarious moments, lol.

Another very good song here. The declaration of "this is a daisy age" would ring true, for fans and the Native Tongues, and it would continue in full force when we head into the 1990s.
Grade- B

24. Plug Tunin (Original 12" Version)
This version is just as dope as its previous version, if not better.

This album is certainly different from any other hip hop albums that were released in 1989, but that's the beauty of it. To this day, it's one of the most creative albums of all time and they deserved all the praise it received. Also, had it not been for this album, I can assure you there wouldn't be any skits gracing hip hop albums, so they definitely pioneered that trend. Prince Paul's production was almost ahead of its time, but it fit De La Soul SO well at this point. Outstanding work.