Representin' Brooklyn, NY, Tek and Steele made a decent amount of noise with their performances on Black Moon's "Enta Da Stage" album, leading into their 1995 debut "Dah Shinin." I also remember when the hit single "Bucktown" was blazing radio and TV months before the album dropped, which is something that really doesn't happen anymore. As mentioned in the Black Moon post, it was this album being in my heavy rotation recently that served as an inspiration for the BCC Files. With the "East Coast Renaissance" still in full swing in '95, Smif N Wessun picked the absolute right time to release their debut. Let's go back in time for the next part of the BCC Files! 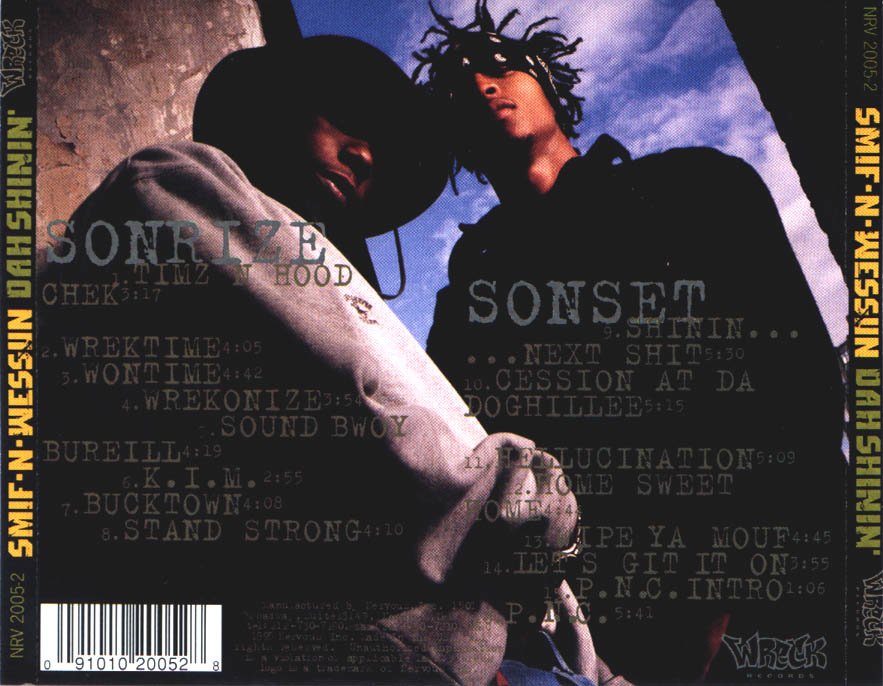 All songs produced by Da Beatminerz

"The name Smif N Wessun and we representin' lovely!"

Right off the bat, Tek and Steele score major points, not only by having this dope song as the opener, but picking up right where Black Moon's "U Da Man" left off in a NICE bit of continuity. Great way to start this album.
*5 out of 5*

That dope hook accurately describes Tek, Steele, and this song in a nutshell. You also can't do nothing but nod your head to Mr. Walt's bangin beat!
*5 out of 5*

Rock came through with one of my favorite hooks ever. Tek and Steele BLESSES Mr. Walt's beat so nicely it's an understatement, bringing that gritty, East Coast sound to the forefront. I love it!
*5 out of 5*

"All heads realize (wreckonize)/Real heads on the rise (you betta recognize)!"

If you couldn't/didn't "wreckonize" the dopeness here, I don't know what album you were listening to, lol!
*5 out of 5*

What makes this classic so dope is how everyone involved, including guests Starang Wondah, Top Dog and Jahdan Blakkamore, blended hip hop and reggae. Sadly we don't hear this type of blending anymore, but in the 90s it was VERY welcomed and appreciated.
*5 out of 5*

No matter what life deals you, just gotta keep it moving. I can relate to that myself.
*5 out of 5*

Another classic right here, and like I said earlier it was already blazing radio and TV months before the album came out. And yes, even a song like this received radio and video play back in the day, deservedly so.
*5 out of 5*

Those few lines tell the tight story of this apply titled banger.
*5 out of 5*

When Tek and Steele link up, we obviously get something dope out of it, and that's clearly the case with this one.
*5 out of 5*

What a dope, inspired cession this was! Much like Wu-Tang, when most, if not all, of the crew gets on the same song, it's going to produce some very good results. I still wonder why Buckshot was not on this song.
*5 out of 5*

Tek and Steele give us a little bit of storytelling, in what could also be titled "A Day in the Life of Smif N Wessun." One of my favorite songs on the album.
*5 out of 5*

There's no place like home, especially when it comes to where you're from. They represent Brooklyn to the fullest and that comes across here.
*5 out of 5*

Another tight song on an album FILLED with them.
*5 out of 5*

Where "Wontime" was just that for all external forces, this classic was a lyrical shot to anyone who wanted to test Smif N Wessun.
*5 out of 5*

Tek and Steele give props to each other, as well as close homies, dead or alive, in a fitting closer to an incredible album. Partners in crime indeed.
*5 out of 5*

This album has also aged well and I plan to put it in the 14-25 section of my favorite albums of all time, but something would have to go, lol. "Dah Shinin" was one of 1995's best albums and a hell of a debut from Smif N Wessun. Lyrically they were at the top of their game, holding the fort down so nicely. Behind the boards, this may be the best produced album in the BCC's catalog. Da Beatminerz did an outstanding job incorporating hip hop, reggae, and a little bit of R&B/Soul to create an unforgettable sound that more than complemented Tek and Steele. The album recently celebrated 19 years, and like any music that gets better with time, it'll stand that test. Thanks again for this classic!!!!!