Rock and Ruck already had a very good run of guest appearances leading up to their 1996 debut "Nocturnal." If there's one song that made me anticipate this album very much, it was the classic "Operation Lockdown," which I'll get to of course! After two straight classics in the form of "Enta Da Stage" and "Dah Shinin," the momentum was still present for the BCC heading into 1996. So with that being said, let's head back in time for the "Nocturnal" journey! (On a small note/fun fact, I copped the cassette a few months after its release prior to copping the CD.) 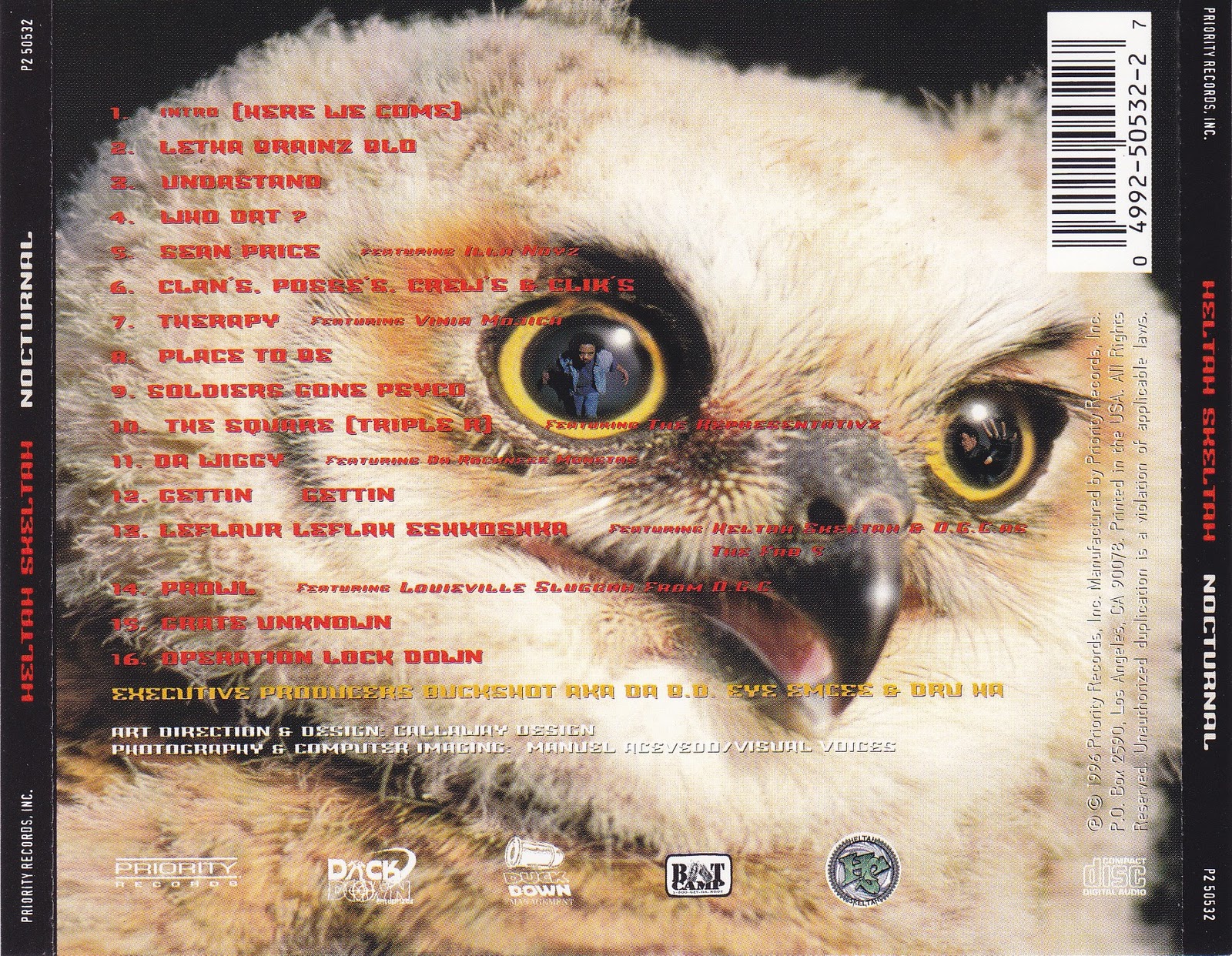 Yes indeed! This is another joint I listed as one of the best album openers of all time. After a hype, spoken intro provided by Starang Wondah ("Nocturnal, which means to live life at nighttime, daytime's used to plot schemes for the night prowl baby. In other words we see through the bullshit niggas be tryin to do!"), Rock just comes out the gate, lyrically blazing, setting this "Nocturnal" journey off proper ("you asked for it, who want beef well here's war!"). Awesome. And yes, this gets a "5 out of 5."

I remember going crazy when I first heard this banger. Were heads ready for this one? I don't think so, lol!
*5 out of 5*

Whether it was in or outside of the studio, Rock and Ruck had their way of taking care of business. This banger made sure you undastood it!
*5 out of 5*

4. Who Dat?
Brief skit, quite funny too. Don't ever roll up to these cats' crib and not knock on the door the way you should, lol.

We got some early glimpses of the sense of humor possessed by Ruck, and he would later go by "Sean Price," his real name. Very good song here, along with a decent verse by Illa Noyz.
*3.5 out of 5*

In 96, there was no shortage of clans, posses, crews and cliks in hip hop, and the BCC could certainly testify to that. The hook could've been better, but this way very good stuff.
*4 out of 5*

Ruck and Rock scored major creative points with this one. Rock (aka Rockness Monsta) is in need of some ol therapy, and he goes to see Dr. Killpatient (Ruck) to help with his issues. In a funny moment during the first verse, the doc chastises Rock in an effort to get him to open up more during the session, lol.
*5 out of 5*

8. Place To Be
Produced By: Sean J Period

"Place to be is on my side duke/Cause you don't wanna be the target when I fly the coupe!"

Well, heed Heltah Skeltah's advice or else, lol! Continuous dopeness.
*4 out of 5*

"Will all true warriors in the house say I/Say I if you not scared to die/You can look nightmare square in the eye, say I/Soldiers gone psyco, why!"

This banger begins the second half of the album.
*4 out of 5*

10. The Square (Triple R) Featuring The Representativez
Produced By: Supreme

Looking back, it's safe to say that The Representativez were next in line after O.G.C. That didn't quite happen, but they rep nicely on this joint with Rock and Ruck.
*4 out of 5*

This one is almost as humorous as "Sean Price," based on the hook alone, but it's serious business for the most part.
*4 out of 5*

"He said go what you do, grew screwed I blew through/Two crews who claim they got funk, maybe true cause they do doo!" -Rock

So what you gonna go when you stuck at 32/Degrees please, get off yo knees/And follow these, now swallow these/Buckshots from the rifle/Then I'll make niggas beat it and scream like Michael!" -Ruck

Myself and others have wondered for YEARS what the title of this song stood for, but that's neither here nor there. Sparsky & Dutch and The Three Amigos come through in the dopest way possible with this classic banger. Man, if only we could've got a "Fab 5" album after this.
*5 out of 5*

"Daytime used to plot schemes for the night prowl." This line is the epicenter for this banger, all about the prowl.
*4 out of 5*

Oh yes, one of many reasons I anticipated this album so much. I loved the video, the tight rhymes by Rock and Ruck, and E-Swift's (of Tha Alkaholiks) dope beat. This was all about having the game on lock and they delivered. (There was also a "Lockdown Skit" after this song.)
*5 out of 5*

Heltah Skeltah were one of the hottest duos in hip hop in '96; "Nocturnal" was also one of that year's best albums as well. I also remember they were on an episode of "Rap City" with Joe Clair (late 1996 or early 1997), and they had mentioned that they were one album away from going Gold, which was interesting at the time. The momentum was still there in the BCC camp, leading into O.G.C.'s "Da Storm." Overall, Rock and Ruck fired on all cylinders with a highly dope album, which holds the strongest nostalgic vibe with me of all the BCC albums. Job well done!