This post will be brought to you by myself and fellow poster Shaun AKA SYpher. Due to our participation in one of the hip hop groups on Facebook (can't recall which one at the moment, lol), I was initially asked to check out this debut mixtape from Big Bad Baragon. Not only did I assure him I would check it out and follow it up with a review, but Shaun also checked it out. With all that being said, I thought it would be good to do a joint post/review for an upcoming artist. Shaun and I also decided to listen to it at the same time, which will be the theme of this review. 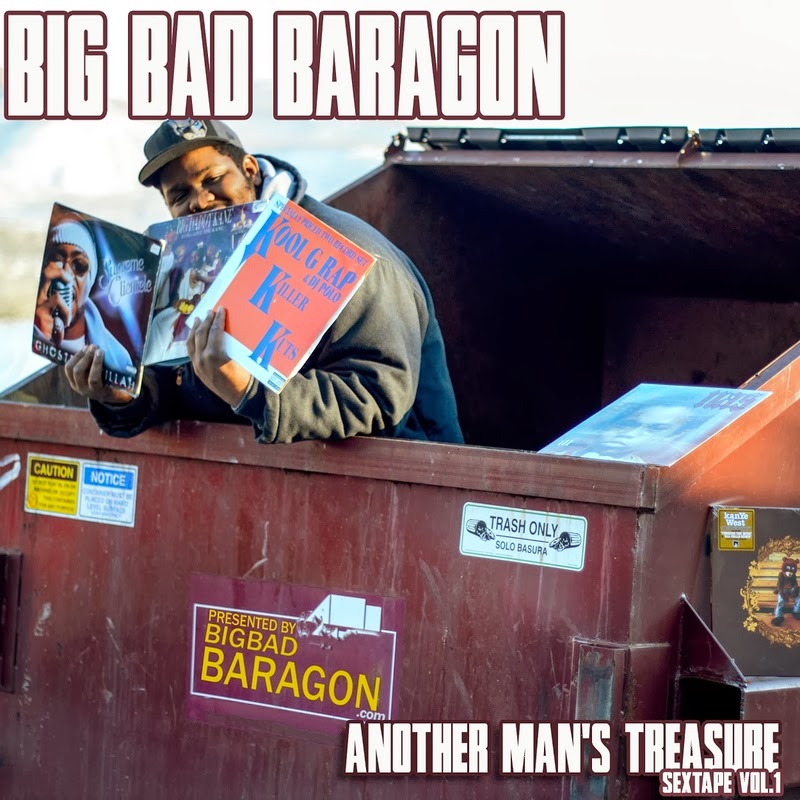 S: This is dope, right away it reminded me of "Demigodz Is Back" (off the 2013 album KILLmatic) but I like how the same Rocky sample was used differently.

Wayne:  I also liked the Rocky samples and how he flowed to the beat.

S: I like these kind of tracks where dude is just spitting. That line about Drew Barrymore made me want to rewind this, lol. When listening to a new rapper for the first time, the first verse you hear is key, and he nailed it.

W: I hear you on that. And in this case, the first verse is almost as important as the opening song on an album.

3. Call From YL (Skit)
S: A fun little skit to set the scene for the next couple songs

S: I like how he focuses on getting his point across. He stays on topic and still keeps the rhymes tight. And I really relate to this one, being a student who likes to rap and seeing some of my friends working day and night jobs while fitting music in where they can.

W: Apply titled right here. All he wants to do is be a rapper, nothing else. I like this kind of passion when it comes to hip hop culture (education and church are not on his mind and he's not letting anything stand in his way).

W- I really like that unmistakable Big Daddy Kane sample in the background on this one. Mr. Baragon is talking about the girl he has a strong crush on and all the things he would do to have her. It's not the average "female track", but it's very good, albeit brief.

S:  "She been in everything from mosh pits to offices." Oooo-weeee, that definitely sounds like “wifey type”! But on a serious note, these days there's so many "girly type tracks" out that they can get corny sometimes, but Baragon pulled it off in a good way that you can relate to.  He kept the rhymes tight and painted a picture.

"Every Romeo needs his Juliet"

W: After the brief, interesting touch of "Angie", we jump right into the standard "female" track here (or as Shaun said, "girly type track", lol). It's not bad, but nothing we haven't heard before.

S: Not really my type of track, he got a little too mushy for my taste.  I can dig it though, it has its purpose.

7. Call from Madi (Skit)
S: I’m liking how these skits break up the mixtape into different segments, and how he anticipates how people would react to these songs.

W: Teddy Pendergrass' "When Somebody Loves You Back" is the clear influence behind this song and it hit me immediately when it started. Love is in the air on this song and that's mainly what it's about. Another track for the ladies.

S: I think if you're going to use someone else's beat, you have to be able to rap just as good if not better than the original. Big Pun, for example, is a tall order but I'm not mad at what Baragon did here. Dope rhymes. He killed this one.

W: You made a good point about rapping over someone's beat, but overall he did come hard on this one and it's tight as hell.

10. Pink Matter Interlude f/ Dreadful Controversy
S: This was a good dose of comedy, I like the sense of humor shown on this mixtape.

W: Baragon delivers another dope freestyle, this time over Drake's "5AM In Toronto". I really felt this one.

S: Yessir! Easily better than Drake's own song, with nice wordplay to match. Although there are a lot of freestyles over this beat, Baragon nailed it again.

W: He said "leave you like Carrie, Underwood, buried." Wow.

S: And I think this is the most aggressive he's sounded on the whole mixtape on a vocal level.

13. Chill With Me
Featuring Renee Francisco

S: This is a nice chill track, no pun intended.

W: Baragon grants Ms. Vicky her wish with another track for the females.

S: Renee sounds good on the hook. Overall he already knows how to cater to both sides,
and I like how even on these girly tracks he doesn't sacrifice his lyrical integrity. He still rhymes dope over this J Dilla beat.

S: I haven't heard anyone spit over Naughty By Nature's "O.P.P" in a longgggg time. Good choice.

W: It is a good choice for what I considered a freestyle, but it's a good natured cover, if you will, of "O.P.P.", and it's another dope song. I had to laugh out loud at BONG standing for "baggin other niggas girls". Jean Paul came through with a decent verse too.

W: This was one of the funniest outros I've heard in quite some time.

W: We have all heard songs about hustling, but he puts an interesting twist on it.

W: He makes it clear about the benefits of staying on the grind.

S: Good choice for a closer.  The Kool G Rap feature is a big selling point for this mixtape, but saving it for the end shows that this is a dope project even without this collab.

W: I agree with that Shaun. The legendary G Rap stops through for this apply titled banger.

S: It has to be a big deal for Baragon landing this collabo.  Good on G Rap for cosigning this.

I've heard many mixtapes in my time, but when it comes to someone trying to make a name for themselves, this project by Baragon is a top notch effort. On this one mixtape, he has everything that's missing from a lot of hip hop today: dope rhymes over dope beats, punchlines, wordplay, breath control, something for the fellas and ladies, and confidence. Shaun said, "This dude should definitely get big enough to at least go on tours and stuff. He has the personality and the talent to be winning, and he really nailed that first impression and showed consistency throughout the mixtape." I agree with that assessment. I don't rate mixtapes, but if I did, this one would earn a solid 4 stars. Good job Baragon, keep up the good work!

If you interested in downloading and/or streaming the mixtape, you can do so at the link below:

Check out Shaun's blog and his Twitter as well!