Coming almost 2 years after 2007's "American Gangster", Jay blessed the hip hop world with the 3rd album in the Blueprint trilogy. I'm not sure if it was intended to be on this album or not, but I remember being hyped as hell when I first heard "Jockin Jay-Z", which you can also listen below:

As you can probably tell, the anticipation for this album was already there obviously, but that single only made it grow. More on this later. Without further delay, let's get right to it! 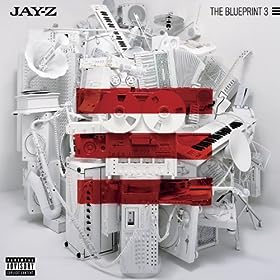 The Album
1. What We Talkin Bout

The day I bought this, I played this song about 3 times before I made it to the next song, that's how excellent it is. Fact or fiction? Rhymes or millions? Beef or not? What we talkin bout indeed. Everyone has something to ask and/or say about Jay and he addresses it in vintage Jay-Z form.
*5 out of 5*

That line above perfectly describes this excellent, appropriately titled song, and there are so many quotables here that I'd be listing the whole song as a result, especially the 3rd verse.
*5 out of 5*

No I.D.'s reworking of Janko Nilovic and Dave Sucky's "In the Space" provides the perfect backdrop for Jay and his lyrical ending of Auto Tune. I want to make two points before I proceed. 1) At this point in hip hop (and R&B too), the use of Auto Tune was becoming a trend for all the wrong reasons, as one of the keys to success then was either having an auto tuned hook, song, or both. I feel this song ended that trend, although it did pop up a few times since 2009. 2) Lil Wayne released a "No Ceilings" mixtape later that year (which I have heard), and freestyled over this "D.O.A." beat. I remember hearing people say Wayne flowed better over the beat than Jay did. I disagreed 100 percent. I'll admit, Lil Wayne did ok, but in no way did he "murk the beat" better than Jay. Overall, I really like this song, dope as hell.
*5 out of 5*

This song received a LOT of radio play in 2009. "Run This Town" was a nice title for it, because Jay, Kanye West and Rihanna, who did very good on the hook, did run the airwaves at the time. And yes, Kanye did have the best verse.
*5 out of 5*

Like "Run This Town", this song also received a lot of airplay and it still receives spins today. It's one of the best tributes to New York in a hip hop form ever, and I don't think anyone else could've brought it on the hook like Ms. Alicia Keys did.
*5 out of 5*

Real recognize real, and that's what this Young Jeezy assisted song is all about.
*3.5 out of 5*

"Hov on that new shit, niggas like how come/Niggas want my old shit, buy my old album(s)"

"MJ at the Summer Jam, Obama on the text/Y'all should be afraid of what I'm gon do next"

I really like this one and it does have a party vibe to it, which is why my mom likes it so much, lol!
*4 out of 5*

Not even Drake on the hook ruined the fast paced vibe of this Timbaland produced track.
*4 out of 5*

I like how Jay gave a nod to hip hop's past, present and future, all the while signaling the rise of a then newcomer in J. Cole.
*4 out of 5*

Man, although this one was aimed at the ladies, Jay was firing off punchlines throughout. His flow was more relaxed than usual, and the beat could've been a bit better, but lyrically he made this shit work.
*4 out of 5*

Look at that title. Although this is something that's been covered by many artists over the years, including Kanye and Jay. I'm not sure what they were aiming for with this futuristic/experimental sound. It did serve as an indirect precursor to "Watch The Throne".
*2 out of 5*

Although I know why Jay made this, I honestly don't think any of us needed any type of reminders of what he done over the years. I personally would save that for the actual, last, this is it album.
*3 out of 5*

"The motivation for me is them tellin me what I could not be..... I'm so ambitious"

"Dear teacher, you probably somewhere near a speaker/I'm ballin outta control, can you hear my sneakers"

Pharrell's hook sums up this dope song nicely. Jay's always been an ambitious person and ironically this is his "reminder".
*4 out of 5*

I agree with a previous reviewer, who drew the conclusion that Jay was alluding to age plus Jay-Z equals "forever young". He'll remain forever.
*4 out of 5*

Before I get to my final thoughts, I want to talk about "Jockin Jay-Z". I recall saying that had this song been on the album, I would've given it a 4.5 star rating. Well, I have to take that back. I mean, it would've been a better choice than a few of the songs on here, but my rating would remain the same. As for this album, it's still very good, especially with five straight "5 out of 5" rated songs, but I don't think it has aged all that well. Moreso than any album before it, "Blueprint 3" clearly showed what direction Jay would take as his career continued. On par with the first Blueprint? Nope. Better than Blueprint 2? Possibly.

Next, after multiple guest appearances, the "Watch The Throne" album with Kanye West and more historic moves, 2013 brings us "Magna Carta Holy Grail".
Posted by Wayne M. at Wednesday, January 29, 2014