After the well received "Trophies" album in 2012 with Apollo Brown, OC returns, along with producer Ray West, with the nicely titled "Ray's Cafe". 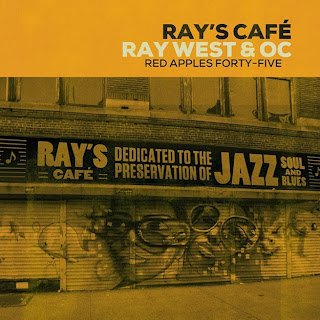 THE OPENER
“Ray’s Café” is one of the most smooth and mellow openers I’ve heard in quite some time, definitely a NICE way to begin this album.

After the opener, the smoothness continues with the apply titled “Have Fun”. OC says “take advantage of life because you can’t cheat death” and in this day and age, I totally agree with that line. “Soul Kitchen” is SO good I bet it would sound lovely in the kitchen while you’re fixing up any type of meal, especially good ol soul food. “Breaking Rules” is dope and “Go Back” (featuring Milano and AG) is very good with its throwback vibe and style. “This right here is nothin but positive vibes”, OC declares on the NICE closer “Gotta Luv It”, and the mellow style here reminds me of Nas’ song of the same title from the “Lost Tapes” album. All of the songs I mentioned would’ve made this a GREAT album by themselves, but instead “YMI” and “Lovers” made the cut, but respectively those joints either seem out of place on an otherwise smooth album and/or they shouldn’t made the album altogether.

Although it almost comes off as an EP, this is a nice, soulful, smooth, fast paced album by Ray West and OC, 4 star material right here. OC continues to get better with age and he hasn’t lost one step.
Posted by Wayne M. at Friday, January 24, 2014