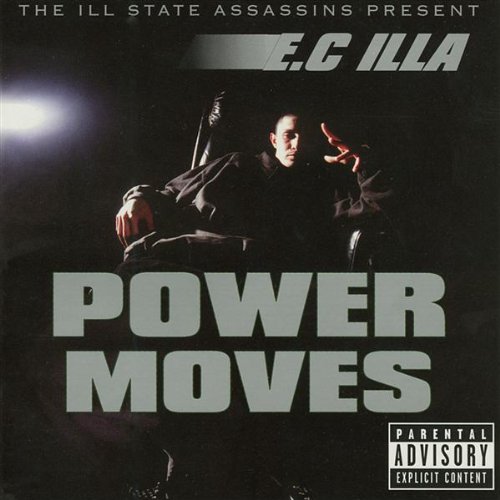 I received this as a recommendation. I honestly can't recall who it was that gave me the recommendation, but if that person is reading, I would like him/her to identify themselves! Prior to this review, I honestly hadn't heard of E.C. Illa, so with this being my first exposure to him, let's dive right in and see how the album turned out.

The title track, "Power Moves", starts things off on the right note. Illa has moves to make and gotta do em big, I hear that!

We follow up the title track with "To The Break", as Illa definitely "keeps it fresh" on this one. I also liked the hardcore styled "Makin History" and "Old School Tactics" (featuring Rhymefest), which succeeds with it's throwback vibe mixed in with Illa's (updated) flow to match. I also really liked "Ill State of Affairs (Ain't No One Down)", which finds him calling out those in hip hop who are not supporting/representing the culture like it should be. I can't forget about "The Game You Claim". Illa says whatever it is you're doing, be true to it and again, I hear him on this one. "It Has Just Begun" was decent, but a little too brief, and the apply titled "You Don't Wanna" was a good way to close the album.

The album seemingly has no filler to speak of, although "Originality's the Key" was tight lyrically, I didn't care too much for the beat. "Hustler's Party" seemed a tad bit out of place, even though he gave props to other artists, hip hop and R&B, hailing from Chicago.

This fast paced album was very good, clocking in a solid 4 star rating. After doing a bit of research, it's safe to say that the production on this album, which is also very good, was handled by Illa himself as well as The Legendary Traxster, who notably worked with fellow Chicago artists Twista and Do Or Die. Lyrically Illa is dope, not too serious, and he does a good job on the mic throughout this album, no doubt about that. This was another welcomed recommendation and I'd also say check it out if you haven't heard it already.
Posted by Wayne M. at Monday, November 11, 2013