I REALLY love these hip hop trips down memory lane, especially when it comes to the 80s and 90s! There was also a time, mostly during the mid 90s, when an artists' song would be played MONTHS before his/her album dropped, and it didn't hurt the artist as much as you may think; it made anticipation for the album that much stronger. That's where Heather B comes in. Specifically, I remember "All Glocks Down" being played on the radio in '94 and '95, and keep in mind her debut dropped in 1996. With hindsight being 20/20, Ms. B represented a new breed of the female MC at the time. Just to name a few, MC Lyte was still making noise in 96; Bahamadia was the new (underrated) femcee on the block; while Lil Kim and Foxy Brown, another new breed of femcees, were also making a name for themselves (more on them later too). Different styles and personalities to be sure, but Heather B clearly stood out from the rest in my view/ Not only was she from the East Coast, she had this hardcore, ruff & rugged style on the mic that was almost unheard of at the time, and certainly NO femcee is coming with that style in today's hip hop world. So with all that being said, it's time for a revisit! 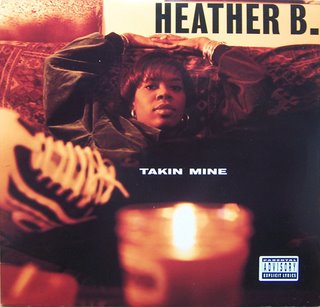 
All songs produced by Boogie Down Productions member DJ Kenny Parker except song 9, which was produced by Da Beatminerz.

There was a new femcee on the scene, and this TIGHT opener set the right tone for the album, with more to come.
5 out of 5

"So feel my funk, my beat, my vibe/Recognize that I'm live, all live, you know the time/Kid just raise up, rise up, open ya eyes up/I already got you sized up, so wise up, BITCH!"

Backed by a bangin' Kenny Parker production with samples courtesy of Black Moon ("How Many MCs") and The Stylistics ("People Make The World Go Round"), this classic was already blazin' the radio in '94 and '95, long before the album came out. She's promoting the use of non violence while at the same time saying she'll figuratively murder you on the mic. Straight heat!

3. If Headz Only Knew

"If headz only knew how I felt about the rap game/They know, I ain't goin out!"

"My style is flagant and it's foul!"

I would certainly like to know how Ms. B feels about the hip hop game now compared to the memorable year that was 1996. Either way, lyrically she still killed this track, even with the use of some sports metaphors towards the end. Tight as hell.

This APPLY titled song featuring M.O.P. is simply dope. And you can tell Ms. B was equally as amped as M.O.P., but then again, you can't help but get amped when you're on a track with M.O.P., especially when you have a dope beat to match.
5 out of 5

The theme here was, no matter what she has to do to be successful in the game, she's going to do it. Takin mine indeed. I like this one right here.

Ms. B still represents on this one, more dope lyrics with a dope beat.
4 out of 5

I like this idea: sending MCs back to the drawing board, or should I say back to the lab/studio to come correct. A LOT of artists need to that nowadays.
5 out of 5

"I fuck around and get hardcore!" -The Notorious B.I.G.

Word (and more props) to the late great Notorious B.I.G. for that line from his classic "Warning." Ms. B does just that, getting hardcore on another dope track.

"One time for ya muthafuckin dome piece/Chilltown's in the house and we represent the East/Real niggaz up, you duck niggaz duck/You buck we buck, nigga so what!"

Interesting story. I've always owned mix CD sby DJ Juice, a DJ I've been supporting since 1997. One particular mixtape in question is "Volume 31." This song is on it, however, I didn't know until now that this was the song that I've been trying to locate for the longest time (mainly due to the lack of a tracklist, lol). You can also attribute this to me not playing the album in SUCH a long time unfortunately. This joint bangs seriously, and yes, Da Beatminerz, famous for their work with the Boot Camp Clik, comes hard along with Ms. B for this one.

I couldn't picture any other song on this album closing it effectively like this song, another very good one.
4 out of 5

Wow, just like I seem to type each and every time when I revisit something from the 90s, this has aged incredibly well. Also, next to MC Lyte's "Eyes On This," Rah Digga's "Dirty Harriet," and possibly Lauryn Hill's "The Miseducation of Lauryn Hill," Heather B's debut is one of the best albums I've ever heard by a female MC. She had NO gimmick or an alter ego; she didn't need to take any clothes off or rap about anything sexual; she didn't need to be controversial. What she brought to the hip hop table was a hardcore persona (but still lady like), nice on the mic over equally nice production and she did that in spades on this album. It's unfortunate that she didn't blow up, because with the way "All Glocks Down" was showcased, I thought she was well on her way. Why didn't her career take off? There are a few factors:

1) The timing of the release of her debut. With hindsight being 20/20 and all, it can be argued that it would've been a smart career move for her album to have been released in either '94 or '95, especially with the aforementioned "All Glocks Down" receiving mad radio play, however, this came out in a STACKED year that was 1996. Although it received a fair amount of promotion via The Source and Rap Pages magazines respectively, it was largely slept on and fell under the proverbial radar unfortunately.

2) Label issues. Capitol Records was a decent label, but for whatever reason, they didn't do a good job promoting this album, not to mention that by the time the album came out, songs like "All Glocks Down" and "If Headz Only Knew" had all but disappeared from the radio and TV.

3) The next wave of female MCs. Remember I had mentioned Foxy Brown and Lil Kim earlier? Well, with all due respect to Ms. B and other femcees who made a decent amount of noise in '96, make no mistake about it, in terms of the female artist, it was their year, which was confirmed with notable guest appearances, photo ops and their well promoted debut albums being released one week apart. In that regard, it's easy to see why someone as lyrically gifted as Heather B may have fallen by the wayside.

Overall, I'll give this a 4.5 star rating and I wonder just how good a career she could've had with the right promotion, timing and record label behind her. A femcee like her is certainly missed in today's hip hop world and I thank her for this slept on, underrated album.