After 1994's classic and creative "Dare Iz A Darkside", Redman was becoming firmly established in hip hop, all while getting better in the process. 1995 saw the birth of his long time partnership with Method Man, culminating in the classic "How High" (the original and remix) and having possibly the best chemistry on the mic ever. I can already tell you that this album does hold up today, and one of the reasons why I'm excited about reviewing it is determining once and for all which Red album is my undisputed favorite, between this one and "Dare Iz A Darkside". As with his first two albums, the production is largely handled by Red and Erick Sermon, with a few special guests along the way. Let's revisit "Muddy Waters" shall we!!!!! 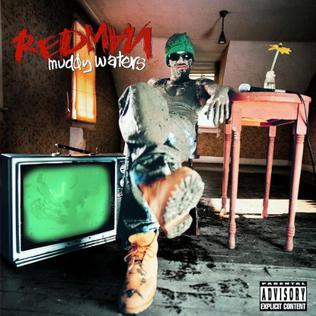 "Iz he 4 real, he can't be", well Red certainly is, and that question is answered on this brief, bangin opener.
5 out of 5

Another banger, as Red does indeed "rock da spot" over a dope beat from Mr. Sermon and Mr. Fyffe.
5 out of 5

"I gets down like that/Who am I, funk doctor (as I kiss the sky)"

Although it's an interlude, Erick's beat is dope as hell, providing another welcome from Red to the "Muddy Waters" extravaganza.

Dope, fast paced song. Red, Rock, and Napalm holds this down pretty nicely on the mic.
5 out of 5

6. Pick It Up
Produced By: Erick Sermon

"You remind me of school on a Sunday, no class"

The hook may be simple, but overall it's effective and it doesn't take away from this song at all. ANOTHER banger.
5 out of 5

7. Skit
A funny skit as a reporter gets hilariously, slightly ambushed while reporting the, uh, news, lol.

"Ay yo I got a slight problem, I smoke weed too much"

Well, that opening line describes this song in a nutshell, and I'm sure the fellow smokers (still) love this one.
4.5 out of 5

The hook to this is one of the most memorable hooks ever (certainly brings back memories from 97), as well as the "Blues Brothers" influenced video with Method Man. Like you need to ask whether this is a classic banger or not, lol!
5 out of 5

10. Chicken Head Convention (Skit)
LOL, can you IMAGINE if there actually were "chicken head conventions"?? Well, this is quite the hilarious skit, makes me laugh each time I listen to it.

11. On Fire
Produced By: Erick Sermon

"We on fire tonight, and the place is lookin steamy!" -Busta Rhymes (It's A Party)

Yes indeed, more dopeness from Mr. Noble.
5 out of 5

12. Do What Ya Feel (featuring Method Man)
Produced By: Pras & Te-Bss

Yes, Pras from the Fugees was one of the driving forces behind the boards on this classic, which is the second actual Red and Meth collabo after 1995's "How High" if I'm not mistaken. I've always said that Red and Meth have the best chemistry on the mic, and this is one of MANY examples. Also, Red's last verse was one of the best verses from 97.
5 out of 5

13. The Stick Up (Skit)
Lol, another funny skit (especially the guy singing at the beginning). Leave it to Red to throw a sense of humor into a "stick up", lol.

Again, not much to say here other than it's really dope, yes indeed.
4.5 out of 5

15. It's Like That (My Big Brother) featuring K-Solo
Produced By: Reggie Noble

A memorable hip hop tag team track with Red and K-Solo, simply dope.
5 out of 5

"So turn the volume up a notch, and watch the bump bump, bump bump, make ya speakers pump!"

This Erick Sermon produced cut does bump, no question about that, and Red supplies the lyrical heat.
5 out of 5

17. Uncle Quilly (Skit)
Lol, listen as Quilly, "live from Freaknik 96",  goes on a random woman towards the end.

"I'm an around the clock lyricist, I sleep in my work boots"

This TIGHT song is one of my top 10 favorite Redman songs. I absolutely love the lyrics, the beat, and the nicely sequenced Common sample from "I Used To Love Her". Speaking of Common, he definitely would've fit as a guest on this one.
5 out of 5

There's nothing but straight bangers on this album, and of course this is another one of them.
5 out of 5

20. Sooperman Luva 3 (Interview Skit)
Before we head into the third part of the "Sooperman Luva" series, the only thing I'll say about this "interview skit" is that it turns sexual, and not in the way you think, lol. Has to be heard oddly enough.

LOL. I have to dissect this one, lol!  After a lyrical intro (likely for those who don't/didn't know who the Sooperman Luva is), we head right into the story, of course detailing Red's adventures, if you will, with the opposite sex, and it's about what you would expect. Towards the end, he discovers that the woman he's with is none other Jane, the same "Jane" from the first 4 EPMD albums, lol. Not sure why Red didn't notice this in the beginning, but moving on, lol. After some "wrestling", lol, she informs him that her man has arrived home, and from there, Red wastes NO time in jackin the dude up, practically before he even gets in the house. And it turns out to be PARRISH SMITH, the other half of EPMD! Wow, and when I first heard this, I was a bit surprised at this ending and I never would've guessed it was Parrish (I know it's fictional, but play along, lol). And one last thing, Jane said "he was out of town flippin biscuits". Lol, well that certainly was a lie because there was NO way in hell PMD was at some random spot flippin biscuits, LOL.
5 out of 5

The bangers certainly do not stop at all, as we're "rollin" towards the album's finale.
5 out of 5

My friend James Highsmith loves this closer, and I can see why. It's not called "Da Ill Out" for nothing! All three 3 MCs spit fire over a thumping Erick Sermon beat (Mr. Murray almost steals the show with his verse). Man, we had both an awesome opener AND closer on this album.
5 out of 5


For starters, this album is 5 stars, there's no disputing that. Literally everything was on point (the lyrics, production, guest appearances, and even the skits) and I can't find a flaw anywhere after all these years. Compared to "Dare Iz A Darkside", Red had toned down the humor a bit, but it's still there in a few spots. You can tell he just focused on his lyrical skills and that was mostly at the forefront here, in addition to the DOPE production (almost every song is a banger in some form). And speaking of his sophomore album, it has been my favorite Redman album for years, but now I gotta officially name "Muddy Waters" as my favorite album from Redman, with "Dare Iz A Darkside" a STRONG second. "Muddy Waters" is such a fast paced album without sounding rushed at all, and it was certified Gold within 2 months of its release (like "Dare Iz A Darkside" before it). I hope Red still releases the sequel, even though it's a TOUGH act to follow".Classic.