The legend of BDP/KRS-One begins with this 1987 release, "Criminal Minded." You know, instead of giving an introduction for this session, let's jump right in and allow my words to do the talking in reference to this album! 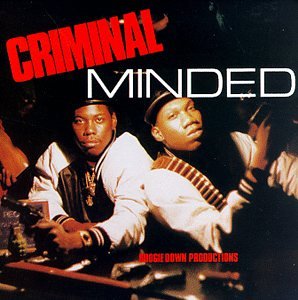 1. Poetry
Wow, this joint right here still makes me bob my head with the quickness! I remember when DJs would play this instrumental on mix shows back in the day and they would just cut and scratch it with finesse too. The title is well deserved, as KRS no doubt spits "hip hop poetry" for the 5:04 it runs. Things would only get better from here on this album.
Grade- A+

2. South Bronx
And here we go, KRS' classic (diss) response to another classic in the form of MC Shan's "The Bridge." Let me speak on this a little bit. If you go back and revisit "The Bridge," you'll notice that during the beginning, after Marley Marl introduces himself and Shan, he says they're going to tell you a story about "where they come from." Now, to his credit, this was always Shan's point, in that "The Bridge," a party intermission record at the time according to Marley, was a song largely about Queensbridge; in no way was that song trying to downplay where hip hop initially started, which is the Bronx. Well, leave it to KRS to take something out of context and run with it, lol, and here we have this classic, the first response in the "bridge wars." KRS also wanted to tell us about where he came from, and he certainly did. True classic and if you were to throw this on today, you can't do nothing but bob your head and sing along!
Grade- A+
3. 9mm Goes Bang
KRS delivers a reggae influenced story about his adventures, if you will, with his "trusted" 9mm. Speaking of the reggae influence, he would begin to do this more often during his career, and while it may be forgotten to a degree, he did it better than Run-DMC, respectively.
Grade- A

4. Word From Our Sponsor
Call this an intermission or whatever you like, either way it's dope. ("Ignorance is a poison, and knowledge will nourish!" Well said.)
Grade- A+

5. Elementary
It's elementary, yes indeed, and SO easy for you to understand. KRS' flow for this one is pretty simple (which is the point), but it's incredibly effective.
Grade- A+

6. Dope Beat
Let's see, what does this song have? A dope beat (with a nice AC/DC sample) with dope lyrics. Nothing more needs to be applied! ("I don't wear Adidas cause my name ain't Run!" Ha!)
Grade- A+

7. Remix For P Is Free
"The girlies are free, cause the crack cost money." Well, that just about sums up this song in a nutshell, lol!
Grade- A

8. The Bridge Is Over

"Manhattan keeps on makin it
Brooklyn keeps on takin it
Bronx keeps creatin it
And Queens keeps on fakin it!"

Wow, and with those four lines, the war words between KRS and MC Shan was effectively over and it was NO way anyone could say KRS was not the victor in this one. Shan's "Kill That Noise" was a good attempt to ease the tension, but it largely fell on deaf ears, and even according to KRS, "this was all he had," and basically the "diss song" was born largely because of this rivalry, and Shan's career was never the same again as a result. Even 50 Cent later admitted that this was SO tight that even the heads in Queens "still had to fuck wit it." He was right. I also can't forget the funny jab at Roxanne Shante, an upcoming female MC who was also part of the Juice Crew ("Roxanne Shante is only good for steady fuckin!" ouch, lol, and this also prompted a response from her on "Have A Nice Day"). After the Kool Moe Dee-Busy Bee battle, this classic right here set the standard for all diss records to follow. Some have been better no doubt, but I shudder to think where the art of battling would be had it not been for this song. And even after this, they were still able to stand on the same stage with each other, as well as do a nice Sprite commercial back in '95, and not have things go out of control to a point where someone gets hurt. Much respect here.
Grade- A+
9. Super Hoe
All about Scott La Rock and his apparent "adventures" with the ladies, hence the title "Super Hoe," lol!
Grade- A

10. Criminal Minded
A classic started this album and a classic ends it. KRS drops some serious lyrical gems on this one, and yes, 26 years later, this joint still holds up today and it still rocks! ("Kings lose crowns while teachers stay intelligent")
Grade- A+

This was the first hip hop release three months into 1987, and it was definitely one of the best albums that year, not to mention one of the best albums of all time, featuring dope beats and lyrics, as well as straight classics up and down the lineup. KRS' legend started here and he would certainly get better over the next several years. On this album, he was dubbed a "poet," but musically speaking, he would be "self promoted" when we get to BDP's second album. Although this didn't come to light until several years later, Ced Gee, himself a member of the Ultramagnetic MCs, also played a role in the production on this album along with KRS and Scott La Rock. Overall, this is a job well done (it's my favorite BDP album) and it'll always stand the test of time.