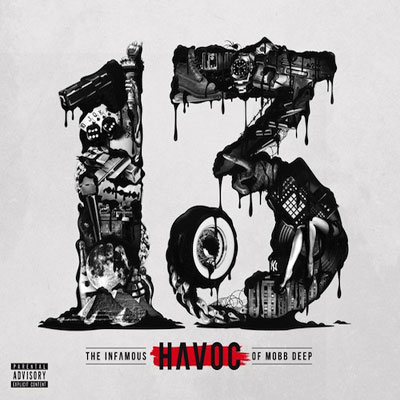 One half of the infamous Mobb Deep, Havoc returns with his 3rd solo album. His solo albums haven't received the attention that his partner Prodigy's albums have, however, he's more known for his dark, tight production than his skills on the mic, which have never been bad in my opinion. So with that being said, let's jump into the review!

All songs are produced by Havoc except two

1. Gone
This is a very good opener and it sets the right tone for the rest of the album. 4 out of 5

2. Favorite Rap Stars (featuring Raekwon & Styles P)
Oh, this should be GOOD right here! Long time fans such as myself are familiar with these three artists, and this collaboration is dope indeed. Case in point, you know who they are! 4 out of 5

3. Life We Chose (featuring Lloyd Banks)
Hav and Banks display great chemistry on this song talking about dealing with the decisions we make in life. Speaking of Banks, he has really been delivering on guest appearances since his "H.F.M. 2" album from 2010. 4 out of 5

4. Colder Days (featuring Masspike Miles)
Four songs into this album and I'm seeing a different side of Havoc on a lyrical level, and this song is no different. 4 out of 5

5. Get Busy
One look at this title and you would think it was something related to either sex or partying, lol, and neither of those apply here. Good song, kind of a more serious/dark side to "gettin busy". 3 out of 5

6. Eyes Open (featuring Twista)
The unlikely, but good, pairing of Havoc and Twista is not a waste at all. While Hav holds his own with Twista, someone who I've never been that much of a fan of, but thought he was good in doses here and there, he stole the show here, although that's not saying much. Good experimental type beat for this one too. 3 out of 5

7. Tell Me To My Face (featuring Royce Da 5'9)
This apply titled track comes with three thoughts: the beat could've been a little better, Royce kills it, and the overall rating is a 3.5 out of 5.

8. This World (featuring Masspike Miles, Produced by Royce Music Group)
Over a nicely flipped sample courtesy of a classic from Willie Hutch (thanks to the Foxy Brown movie soundtrack), Hav and Miles do a very good job on why the world is something else at times. 4 out of 5

9. Already Tomorrow
When you're wrapped up in certain things, time goes by so fast that you don't realize that the next days are here. I honestly can't recall the last time I heard Hav come with this type of introspection. 4 out of 5

10. Hear Dat
I like the idea regarding this song, however, it really comes of as more of the same/things we've heard before, and done better, even by Hav himself. 3 out of 5

11. Gettin Mines
We have definitely heard the "I gotta get mine" type song in hip hop over the years, and you're not hearing any new or insightful here. You can basically apply the thoughts from the previous song to this one as well. 3 out of 5

12. Long Road (Outro)
You don't get many outros like this, but it's brief, as Hav mentions what has taken place in his past has made him the person he is today. I've been there also.

13. Can't Sleep (Bonus Track) Produced By: Statik Selektah
Decent song, but again, nothing we haven't heard before and done better. 3 out of 5

Wow, I'm honestly a bit surprised at how good this album turned out to be, considering where my expectations were once I was aware of this album's release. Production wise, Havoc hasn't lost a step, as the majority of the beats on this album sound fresh and nothing sounds the same. Lyrically he has stepped things up a notch (not a lot) and you can tell that in most of the deeper songs. The guests, specifically Styles P, Raekwon, Lloyd Banks, and Royce Da 5'9 continue their respectable track record of dope guest appearances. Although things slow down considerably towards the end, I gotta give Havoc props for a very good album, one that I have no problem giving a recommendation, even with the somewhat notable absense of Prodigy. My rating right now is sitting at about 3.5-4 stars.