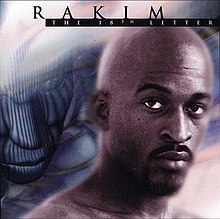 Rakim made his long awaited return to hip hop with his first album (solo and otherwise) since 1992's "Don't Sweat The Technique". 1997 was definitely a good year as far as hip hop comebacks go, and Rakim's is one of them.

Intro
We begin things with a BRIEF clip of an interview, where Rakim states he's giving back what the people have been asking for: skills.

The 18th Letter (Always & Forever) Produced By: Father Shaheed
Although his real name is William Michael Griffin Jr., he'll always be best known as Rakim, always and forever indeed, and this was a damn good way to start the album. 5 out of 5

Skit
After being away for a few years, Rakim is glad to be back on the scene and appreciates the love he receives from the fans. I'll always respect something like that.

It's Been A Long Time (Produced By: DJ Premier)
Rakim's first time on a track by the legendary DJ Premier, and it's awesome. It definitely had been a LONG time (in hip hop years) since Rakim had blessed us with some new material, and this apply titled song is very fitting. 5 out of 5

Remember That (Produced By: Clark Kent)
I really enjoy songs when the artist reminisces on how things were back in the day, and that's exactly what we get on this nice track. 5 out of 5

The Saga Begins (Produced By: Pete Rock)
This is arguably the best song on the album, as Rakim drops lyrical science over a BANGIN Pete Rock production. At first, it kinda slipped me as to why Rakim titled this "The Saga Begins", but it hit me towards the end that all he was saying was after being gone for so long, this was only the beginning. 5 out of 5

Skit
Rakim says he was glad he hadn't released any material, circa 93-96, and it was all about the timing. I agree, simply because with hindsight being 20/20, hip hop was still going through LOTS of changes during those aforementioned years, and even though Rakim's legacy was already set at this point, his first ever solo album would've likely got lost in the shuffle during any of those years.

Guess Who's Back (Produced By: Clark Kent)
I remember going crazy when I first saw the video to this one. The running theme of this album (Rakim's back) continues here over a very good track by Clark Kent. 5 out of 5

Stay A While (Produced By: Clark Kent)
Things slow down just a little bit, as we get a nice mellow track for the ladies, and they should love this one. 4 out of 5

New York (Ya Out There) Produced By: DJ Premier
We get another great Premo track, this one in the form of a dedication to New York, which is where Rakim is from of course, Long Island to be exact. 5 out of 5

Show Me Love (Produced By: Nic Wiz)
Another mellow track for the ladies. As mentioned before, this was something Rakim knew how to do well and I don't think it was ever talked about either. 4 out of 5

Skit
Rakim appreciates being compared to other artists, even new ones, and it keeps his love for hip hop intact.

The Mystery (Who Is God) Produced By: Naughty Shorts and Kid Nyce, Co-Produced By: Bill Blass
This deep, clever songs begins with Rakim essentially talking about God, but as you listen deeply (and later confirmed towards the end), Rakim is directly comparing himself to God, as the God MC. It's not blasphemous at all and lyrically it's probably the deepest song Rakim has ever made. 5 out of 5

When I'm Flowin (Produced By: Pete Rock)
The rhymes continues to go on indeed. 5 out of 5

It's Been A Long Time (Suave House Mix) Produced By: Mo-Suave-A
Decent remix, but nowhere near better than the original. 4 out of 5

Guess Who's Back (Alternative Mix) Produced By: Clark Kent
Another decent remix, and again, not better than the original. 4 out of 5

Initially, I was going to give this a solid 4.5 star rating, but after listening to it again, I honestly can't find anything wrong with this album. I mean, I know the two remixes towards the end certainly neither helped nor helped the album, it doesn't affect the overall quality one bit. Rakim sounded refreshed and better than ever on this release, lyrically he was still in top form with very good production to match. Also, the theme of him being so glad to be back on this album is the icing on the cake, so all of this makes it a 5 star album in my view.

With all due respect to Rakim, this project will end here. I'm not going to dissect 1999's "The Master", which was forgettable overall and for all intents and purposes, "When I Be On The Mic" is the SOLE highlight of that album, and it would've worked better on the 18th Letter album. As far "The Seventh Seal" goes, well, that will not receive a dissection either, as (sadly), that's the first (and only) album to date that literally put me to sleep.