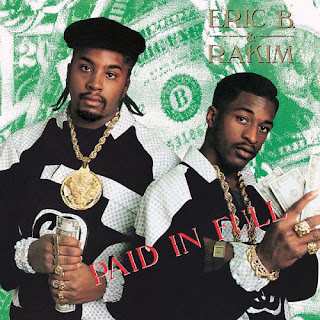 Ah yes, my #3 favorite MC of all time and still one of the most influential hip hop artists ever, Rakim remains a clear example of what an MC SHOULD be, and for this project, we'll start with my #10 favorite album of all time, the 1987 CLASSIC, "Paid In Full".

All tracks were produced by Eric B. & Rakim except one.

I Ain't No Joke
One of the best album openers in history right here, an apply titled song if there ever was one. It's a classic in every sense of the word and saying it sets the tone for the rest of the album is a complete understatement. 5 out of 5 (And much props to Buckshot for his 1997 remake of this song.)

*I ain't no joke, I use to let the mic smoke/Now I slam it when I'm done and make sure it's broke

*I'm just an addict, addicted to music/Maybe it's a habit, I gotta use it

*Write a rhyme in grafitti and, every show you see me/in Deep concentration, cause I'm no comedian

*When you start to stutter, that's when you had enough of/biting it'll make you choke, you can't provoke/You can't cope, you shoulda broke, because I ain't no joke

*This is what we all sit down to write/You can't make it so you take it home, break it and bite/Use pieces and bits of all the hip-hop hits/Get the style down pat, then it's time to switch

Eric B. Is On The Cut
Nice break beat here.

My Melody (Produced By: Marley Marl)
Another classic here, and we get Rakim's lyrical melody over one of Marley Marl's first memorable tracks. 5 out of 5

*I take 7 MC's put em in a line/And add 7 more brothas who think they can rhyme/Well, it'll take 7 more before I go for mine/And that's 21 MC's ate up at the same time

*You shouldn't have told me you said you control me/So now a contest is what you owe me/Pull out your money, pull out your cut/Pull up a chair, and I'ma tear s*** up

*Right after tonight is when I prepare/To catch another sucka duck MC out there/Cause my strategy has to be tragedy, catastrophe/And after this you'll call me your majesty

I Know You Got Soul
Who can forget that classic Bobby Byrd sample on this one? Throw this one at a party today and the dancefloor will still get packed, I guarantee you. You KNEW Rakim had soul after this, say it with me, classic. 5 out of 5

I can't pick 5 memorable quotes out of the song, because it's simply too many, but the follow is perhaps one of the most memorable openings in history:

It's been a long time, I shouldn't have left you/Without a strong rhyme to step to/Think of how many weak shows you slept through/Time's up, I'm sorry I kept you/Thinking of this, you keep repeating you missed/The rhymes from the microphone soloist/And you sit by the radio, hand on the dial Soon as you hear it, pump up the volume

*Some of you been tryin to write rhymes for years/But weak ideas irritate my ears Is this the best that you can make/Cuz if not and you got more, I'll wait

*Wit knowledge of self, there's nothing I can't solve/At 360 degrees, I revolve

*This is actual fact, it's not an act, it's been proven/Indeed and I proceed to make the crowd keep moving

Paid In Full
A straight CLASSIC and it definitely did NOT need a hook. NO artist could ever come close to remaking this song (some have tried), because it's simply THAT good. The ENTIRE song is one memorable quote altogether.  5 out of 5

As The Rhyme Goes On
This is probably the "lesser" known song on this album, but that doesn't mean it's not good, because it is. "The rhyme gets together as the rhyme goes on", yes indeed. 5 out of 5

Chinese Arithmetic
Another good break beat, heading into the next CLASSIC.

Eric B. Is President
The following opening verse tells the story of this:

I came in the door, i said it before/I never let the mic magnatize me no more/But it's biting me, fighting me, inviting me to rhyme/I can't hold it back, I'm looking for the line/Taking off my coat, clearing my throat/My rhyme will be kicking it until I hit my last note/ My mind will range to find all kinds of ideas/Self-esteem makes it seem like a thought took years to build/ But still say a rhyme after the next one/Prepared, never scared, I'll just bless one/And you know that I'm the soloist So Eric B, make 'em clap to this

Like you need to ask what THIS song gets. 5 out of 5

Extended Beat
Not sure why this one was called "Extended Beat", as it's nothing more than the "Move The Crowd" instrumental.

What more can I say about this album that I haven't said already? Simply put, it's my #10 favorite album of all time, it's a 5 star classic, and it's one of the greatest albums in all the history of music.