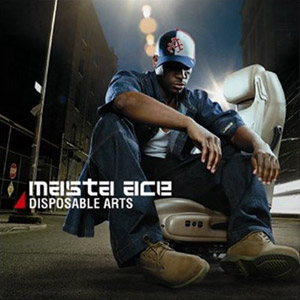 This was Masta Ace's first album since 1995's "Sittin On Chrome", and the beginning to a concept surrounding his albums. Check this out, the concept here follows your everyday kid from Brooklyn, New York, he goes home after his release from prison, and from there, Ace enrolls in the fictitious "Institute of Disposable Arts" school. It's a tremendous concept. It also just occurred to me that the cover is somewhat of a parody of his "Sittin On Chrome" album cover, as it shows Ace sitting on a seat, not in the middle of the street though, and he's essentially in a state of reflection and depression.

The Release (Intro)
The fairly standard release from prison intro starts things off.

Too Long (Featuring Apocalypse, Produced by Masta Ace)
Ace starts this off by saying he didn't think he was ever going to be released, but he's going to do right this time around and he's never going to back to prison, and when someone says something like that, it shows a great sense of maturity. What follows is a very good song detailing how long he's been gone, and although he realizes how things had changed around him, he's thankful for his freedom. 4 out of 5

Block Episode (Featuring Punch & Words, Produced by Luis "Sabor" Tineo)
This would almost be your normal street tale about life on the block, but in this case, Ace and Punch switches things up a lot and they command your attention with the story being told. Great stuff. 5 out of 5

IDA Commercial
This is an "Institute of Disposable Arts" skit. Quite funny too.

Goodbye Lisa (Interlude)
Ace contacts a lady named Lisa to inform her that he's enrolled in the IDA
and he's moving out the hood. Lisa, on the other hand, is none too pleased, almost clowning him for even making the decision and bringing SUCH a negative vibe the conversation, and you can tell it in her tone of voice.

Hold U (Featuring Jean Grae, Produced by Ayatollah)
All about Ace's significant other, and not to mention how he likes to hold her, lol. This is nicely done, and Jean Grae has very good chemistry with Ace on this mic. This is how a song about the opposite sex should be done (from a man's perspective). 5 out of 5

Roommates Meet (Interlude)
Ace meets his roommate, and as Ace walks in, the guy is hilariously freestyling. Lol @ "what's your name money grip?"

Take a Walk (Featuring Apocalypse, Produced by Gerrard C. Baker)
Let's take a walk through the neighborhood. Ace and Apocalypse asks some very thought provoking questions (and makes logical points in the process) about days in the life. 5 out of 5

Something's Wrong (Featuring Strick & Young Zee, Produced by Koolade)
Remember Young Zee from No Brains, on that classic Fugees cut "Cowboys"? So do I, and he shows up on this one with Ace and Strick. Speaking of Strick, he has the first verse here and completely kills it, and I'll admit he steals the show from Ace here. And Young Zee sounded the same he did in 1996, lol! That's not a knock on him at all. 4.5 out of 5

The Classes (Interlude)
Ace and his roommate discuss the classes that he's taking. Interesting set of classes too.

Acknowledge (Produced By: Xplicit)
In probably one of the more underrated diss songs, Ace goes IN on a former Rawkus duo names High & Mighty. He throws SO many hard lines at those cats that I can see why they never bothered to respond. "These XFL rappers tryin to f*** wit a real pro!", "you can't spit so you obviously must swallow!" Wow, yes indeed! 5 out of 5

Watching the Game (Interlude)
The title of this interlude says it all, even the convo with Lisa is touched on with this interlude too. I love the continuation.

Unfriendly Game (Featuring Strick, Produced by Luis "Sabor" Tineo)
Metaphors, similes, and more excellent wordplay on this nice song, using game analogies in a true hip hop form. Ace and Strick kills this one. (And the "stolen car" is touched on towards the end of this song too, as mentioned on the Goodbye Lisa interlude. 5 out of 5

Alphabet Soup (Produced By: Domingo)
We certainly do "learn about the letters of the alphabet", as Ace takes another concept and just straight up gets "lyrically creative" over a nice beat by the slightly underrated Domingo. (We get a news update on the "situation" with Lisa at the end of this song.) 5 out of 5

I Like Dat (Featuring Punchline & Wordsworth, Produced by The Courts Production Co.)
Rough, rugged, and raw (no pun intended) highlighting how they like their women. The lines on this song are hilarious, but they're witty at the same time. 5 out of 5

P.T.A. (Planes, Trains, & Automobiles) Featuring King Tee & J-Ro, Produced by Deacon da Villain)
Who doesn't want the finest things in life? Ace, King Tee, and J-Ro unleash those visions on this one, East and West style. 4 out of 5

Type I Hate (Featuring Rah Digga & Leschea, Produced by Domingo)
I've often heard that the word hate is a very strong emotion/strong term to use when describing anything. Well, in this song, the word hate is not only used carefully, but when you listen to the song with a clear conscious, you can generally see why they feel the way they do, especially from an artist's perspective. 5 out of 5

Dear Diary (Produced By: Domingo)
Dedicated to a page (or pages) in his hip hop diary. It comes off like he's writing it to himself. 5 out of 5

Last Rights (Interlude)
The announcement of Ace's graduation from IDA, as well as his (and the other role players on this album) activities post graduation.

No Regrets (Produced By: Domingo)
This very good closer almost sounds like Ace's swan song in hip hop, but thankfully that was not the case. Throughout his trials and tribulations, he has no regrets the decisions he's made in his career since 1988's "The Symphony". 5 out of 5


Wow, this is one of the best concept albums I've ever heard, and wouldn't you know that in 2001, with Jay-Z's "The Blueprint" the hottest album out at the time of this album's release, I had no idea of this album's existence until about two years ago, smh+facepalm? Either way, you can never discover GREAT music too late, and this is Masta Ace's finest moment right here, and he would continue to get better and better with time (and age). Another fact, guests Strick, Punchline, and Wordsworth, you'll be seeing those names again, especially as we head into Ace's 2004 follow up, "A Long Hot Summer". Excellent album.