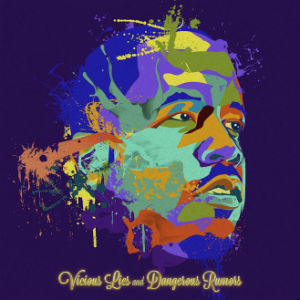 When Big Boi dropped his solo debut in 2010, the excellent "Sir Lucious Left Foot: The Son of Chico Dusty", looking back on it now, I'll admit my anticipation level for it was not as high, however, I went into it knowing I was going to get something great, and Big Boi provided that, as that album was one of the best albums that year. When this album was announced, I was thinking the same thing, however, before I even get into this album, I will say that this was one of the most "interesting" albums I've heard in quite some time. What do I mean by that? Let's take a look shall we.

After a brief intro titled "Ascending", we go right into a fairly decent track in "The Thickets", which is about as odd a song title I've seen in a while, and I've seen a lot of odd song titles. The Ludacris and T.I. assisted "In The A", shows them representing their city to the fullest, and all three men do a damn good job in that regard, much like one of three bonus cuts, "Gossip", featuring Bun B and Big Krit. Killer Mike would've added a little something extra to that song, in my opinion. And speaking of Killer Mike, he makes a sort of song saving appearance on "Thom Pettie". That song isn't wack, but considering an artist the caliber of Killer Mike, his talents could've been used better on this album. "Apple of my Eye" is the first of MANY experimental type songs on this album, and it's decent, but nothing more.

Honestly, that's where all the "praise" ends, because the remainder of this album has to be some of the most strong experimentation (for worse in this case) I've heard on a hip hop album since Common's "Electric Circus". Beginning with "Mama Told Me" (which features the talented Kelly Rowland), I understand the concept of course, however, the message basically gets lost due to a outdated 1980s style track.And man it doesn't stop there. Songs like "Objectum Sexuality" (check out that title), "CPU", "Lines", "Shoes For Running", "Raspberries", just to name a few, are a cross between hip hop, R&B, Techno, Pop, no jazz, funk or soul to be found the way I hear it. If a new fan were to listen to this for the first time, they would not view this is a hip hop album.


Overall, I'm not sure what Big Boit was going for with this album. If it was too make an "artistic statement", I can respect that, but this is Big Boi from Outkast we're talking about here, and he has made his artistic statement a LONG time ago, well before his first solo album. I'm not sure if it was to appeal to a different audience, attract a new one, doing something drastically different from anything he's ever done, or a combination of everything listed, but I'm always honestly, and with that being said I wasn't impressed with this album. Lyrically he's still in top form (although he does sound a little different at times), but the production leaves a lot to be desired. I'll always be a fan of Big Boi (solo and with Andre 3000), but this is an album that will not be making it's way to my collection, and if it did, chances are I wouldn't revisit it. Not recommended, even to the most hardcore Big Boi/Outkast fan.