A breakdown of The Game's "Jesus Piece" 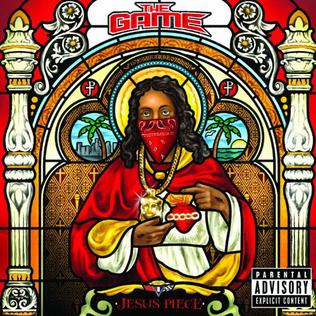 (To begin, I apologize to those who may be offended by this album cover.)

After Game's fourth album, the honestly solid yet forgettable "Red Album", "Jesus Piece" comes the year after "Red", with almost no promotion/hype whatsoever. At first I was anticipating it because I like Game, however, once I saw the tracklist and listened to the samples via iTunes, I almost vowed to avoid this album. So, what I went ahead and done was "Spotified" the album just to review it for the blog. How does it hold up? Let's take a look.

This will be broken up into 3 different sections: the production, the guests (there are lots of them), and the closing.

Production
Courtesy of Black Metaphor (Scared Now & Ali Bomaye), Boi-1 da (Jesus Piece), Cool & Dre (Pray, Celebration, & All That- Lady), Jake One (Hallelujah), K. Roosevelt (Can't Get High), just to name a few, production on this album ranges from very good to more of the same. Game usually has very good beat selection, but overall it's a notch below his previous albums, and that does include "The Red Album".

Guests
I'm really going to break this one down, so bare with me, and one thing I will say early is that most of the guests end up stealing the show from Game, which would've been somewhat impossible a few years ago.

*Scared Now (featuring Meek Mill). This is a good opener, and although I'm not a fan of the overrated Meek, he actually delivers a good verse and doesn't yell all over the place for a change, and surprisingly, he bests Game on this track. It's also something to hear Game essentially, temporary adopts a Young Jeezy like flow here.

*Ali Bomaye (featuing 2 Chainz & Rick Ross). I didn't care too much for this one. Game was his usual on here, but 2 Chainz and Ross, two guys I'm not a fan of either, didn't bring anything to the table that we haven't heard before. Same ol ish here, definitely nothing special, and did Game really quote that ignorant "bandz to make her dance" line on this one??? SMH

*Jesus Piece (featuring Kanye West & Common). Boi-1 da delivers a tight beat for the song, and although Game's verse was decent, it pales in comparison to a seemingly energetic Common. And I guess it was smart to have Kanye perform the hook, as there would've been a chance of him stealing the show on this one too, even on a song with Common. Either way, good stuff here.

*Pray (featuring J. Cole & JMSN). The first of three straight songs catering to the female audience. J. Cole, who's been disappointing me continuously a lot lately, has the best verse, but that's not saying much.

*Church (featuring Trey Songz & King Chip). Is Game REALLY trying to equate the holy place of worship with a STRIP CLUB of all places????? It certainly sounds like it on this one. We get the standard "crush that" type track, as Game provides nothing we haven't heard before, Trey Songz delivers his usual sexually charged material (in this case the hook), and King Chip brings a forgettable verse.

*All That (Lady) featuring Lil Wayne, Fabolous, Big Sean, and Jeremih. Did they really have to sample D'Angelo's classic "Lady" for this? I mean seriously, and again, no one says anything we haven't heard before, especially the overrated Lil Wayne. This song is already interesting because towards the end, as Fabolous begins his verse, the song abruptly ends, smh.

*Name Me King (featuring Pusha T). This is dope as hell. The beat works, Game steps up a bit lyrically, however, Pusha T absolutely kills this track, and again, Game is upstaged on his own song.

*See No Evil (featuring Kendrick Lamar & Tank). This apply titled song is very good, featuring an excellent verse by one Kendrick Lamar. Speaking of Kendrick, remember "The City" from "The Red Album" and how Kendrick stole the show (albeit in a more aggressive tone on that song)? The same thing happens here.

*Hallelujah (featuring Jamie Foxx). This is one of the best songs on the album, mostly because of the beat, but Game still delivers alongside Mr. Foxx.

*Celebration (featuring Lil Wayne, Chris Brown, Tyga, and Wiz Khalifa). My God, wasn't one song with Lil Wayne on this album enough?? Aside from Game and Chris Brown (depending on the song), I'm not a fan of Wiz, Tyga, or Lil Wayne, and sampling the classic Bone Thugs N Harmony song "First of the Month" did them NO favors, and it's ANOTHER song catered to the females at that. I'm NOT sexist, but come on man, smh.

*I Remember (featuring Young Jeezy & Future). This is another confirmation as to why I'm not a fan of Future, and Game mimicking his flow for this track does NOT help. Jeezy, not surprisingly in this case, has the best verse here, but that's not saying much.

Closing
The first thought that comes to mind is that this is the most inconsistent (i.e. the worst) album of Game's career. I'm not sure why Game switched up his voice (even dating back to the Red Album), but listening to him on this album compared to "The Documentary" and "Doctor's Advocate" is like night and day. Also, having an apparent "church/religious theme" interspersed with a hip hop "swag", if you will, does NOT help this album at all, and if that's what he was aiming for, he failed in that regard. Also, this album, much like his last album, was LOADED with guests. Game is already a star, but it's leading me to believe that he may be starting to become a little insecure in his starpower/artistry to continue to get all of the "hottest" artists at the moment, plus most of the guests steal the show from him on his own record. And just when you think the name dropping has leveled off, it rears its head here, and I'm thinking, "man, we get it already", and lyrically he's bringing nothing new to the table. Just more of the same if you ask me.

This is one of those albums that I wouldn't recommend to even the most hardcore Game fan, however, I'll give it a somewhat generous 3 star rating mainly because there are a couple of highlights here, and I feel this album will be forgotten quicker than "The Red Album" was.
Posted by Wayne M. at Tuesday, December 11, 2012