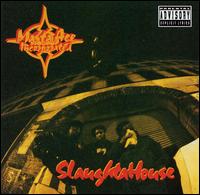 Now going by Masta Ace Incorporated, which included Ace, Lord Digga, Paula Perry, Eyceurokk, and Leschea, Ace's 1993 sophomore album was the unofficial beginning of well executed and creative concept albums, as he addresses what was a growing trend at the time, the intense gangster nature of West Coast hip hop. He doesn't specifically say it, but as you listen to this album, you'll know exactly what he's referring to.

A Walk Thru The Valley (Produced By: Uneek)
Ace begins the album with a deep spoken word and it sets the tone of the rest of the album. 4 out of 5

Slaughtahouse (Masta Ace, Paula Perry, MC Negro, Ignant MC, Produced by Uneek)
The crew welcomes you to their "house", if you will, over a slow, gangsta type track ironically. They're already claiming death the wackness, the materialistic attitudes in the game, etc. Not the best welcome, but it gets the job done. 3 out of 5

Late Model Sedan (Produced By: Latief & Ase One)
An Ace story about "street homicide". He almost makes it sound gory, but it's told nicely from a hip hop/street perspective. 3.5 out of 5

Jeep A** Niguh (Produced By: Bluez Brothas & Ase One)
Ace loves his jeep, and that is epitomized in this highly dope track. 4 out of 5

The Big East (Masta Ace & Lord Digga, Produced by The Beatheadz & Ase One)
Coming from the "big East" boy we ain't slippin. Yes indeed. Dope stuff here. 3.5 out of 5

Jack B. Nimble (Produced By: Uneek & Ase One)
"Let me tell you bout a guy named Jack". Well, that's exactly the type of story you get on this good song. 4 out of 5

Bomm Bashin (Masta Ace and Lord Digga, Produced by The Beatheads and Ase One)
This was a clear shot at West Coast hip hop (subliminal or not), as Ace and Digga turn things up a notch in a hardcore East Coast track. 4 out of 5

The Mad Wunz (Masta Ace and Lord Digga, Produced by Ase One & Latief)
More dopeness from Ace and Digga on this one. True 93 sound for this track. 4 out of 5

Style Wars (Masta Ace and Lord Digga, Produced by Ase One & Bluez Brothas)
More of the very good chemistry between Ace and Digga. 3.5 out of 5

Who U Jackin? (Masta Ace and Paula Perry, Produced by Bluez Brothas)
A sort of "battle of the sexes" styled song here and it's very good. Ms. Perry holds her own with Ace. 3.5 out of 5

Rollin Wit UmDada (Produced By: Ase One, Latief, and Uneek)
The real noticable part of after the song, in which we get an audio clip of Ace freestyling, which is a true lost art in hip hop today. 3 out of 5

Ain't U Da Masta (Masta Ace and Eyceurokk, Produced by Bluez Brothas and Ase One)
Ace kills this one, showing he's the "masta" on the mic, pun intended. 4 out of 5

Crazy Drunken Style (Masta Ace and Lord Digga, Produced by Bluez Brothas)
Ace and Digga do an effective job of convincing you they're drunk on this track. Both come off something serious though. 4 out of 5

Don't F*** Around (Outro) Performed by Leschea, Produced by Ase One)
The beat to this was obviously influenced by D.O.C.'s classic "It's Funky Enough", however, Leschea doesn't do it justice. Nothing to hear on this one. 2 out of 5

Saturday Nite Live (Masta Ace, Lord Digga, & Eyceurokk, Produced by Uneek)
This lively track surprisingly took a while to grow on me, and it's one of Ace's most known songs, a true to ode to Saturday nights! 4.5 out of 5

Born To Roll (Produced By: Ase One)
Yep Ace, if "Jeep A** Niguh" was any indication, you were born to roll. Classic and a great way to close the album. 5 out of 5


After listening to this again, there's no true concept surrounding album (that would come later from Ace), but throughout the album, you can hear Ace being dissatisfied with the current state of hip hop at the time. I also find myself liking this one a lot more than I initially did, and I don't think I've ever heard Ace this hardcore, which is something that would continue on 1995's "Sittin On Chrome".