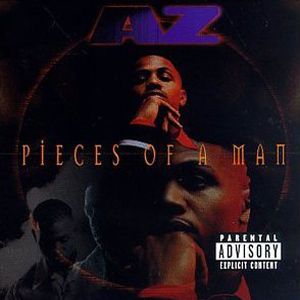 After releasing his classic debut in 1995, "Doe Or Die", AZ returned 2 1/2 years later with his sophomore album, "Pieces of a Man". He had done a few collaborations in between these releases, notably, or unnotably I should say, the hugely disappointing Firm album with Nas, Foxy Brown, & Nature. I personally don't consider this album a sophomore jinx at all, and although it's nowhere near better than his debut, it's still mostly excellent and it's my pick for his most underrated album. He begins things nice and briefly with the "New Life" intro, followed up with the tight "I'm Known". This album's best track unquestionably is the excellent collaboration with Nas in the form of "How Ya Livin". The chemistry is just nice all around, as it supremely samples Glenn Jones' "Show Me". There are some other gems to be found, including "SOSA", "Pieces of a (Black) Man", "Whatever Happened (The Birth)" featuring The RZA, "The Pay Back", and "Love Is Love". I will admit, there are the attempt at commercial/radio play with songs such as "Just Because" (I remember reading in a Source magazine review of this album in 98 that if this song were to be played at a club, the audience would likely "stand against the wall" due to a lack of interest, lol), "It's A Boy Thing", "Last Dayz" featuring Monifah, which totally jacks R. Kelly's "Your Body Callin", and "Betcha Don't Know", a very good way to close the album.

Why I feel it's forgotten
Literally no buzz or promotion for this album, and if some was there, it was very little of it. I feel the stigma attached to the Firm album, plus not being able to match the success of his appearance on Nas' "Illmatic", not to mention the critical success of his debut album all played a role. It's like this album came in 98 and went without any fanfare.


5 favorite songs
How Ya Livin, I'm Known, Pieces of a (Black) Man, Whatever Happened (The Birth), & SOSA