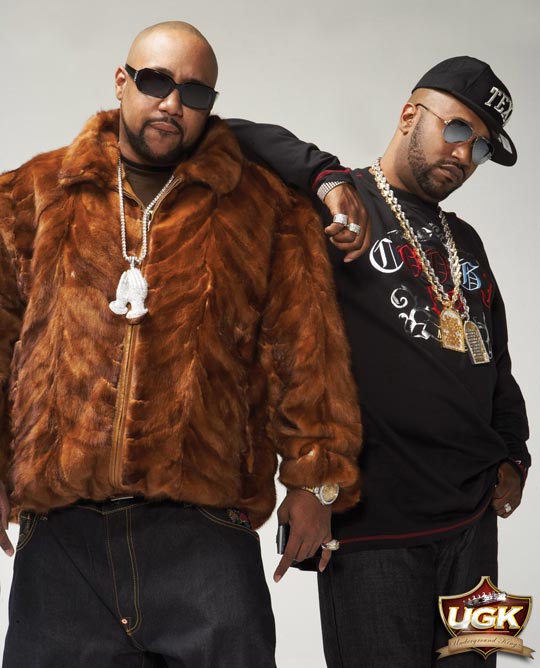 Arguably the best duo to emerge from the South (the state of Texas specifically), UGK (a/k/a Underground Kingz) were one of the essential keys to the rise of Southern hip hop, in addition to other acts such as Scarface (and that includes the Geto Boys too), Outkast, Big Mike, among others. Their sound was often dubbed as "country Rap tunes" by the late Pimp C, and who can argue with that claim, and moreso than any other Southern act, they exemplified the underground sound of the South. Bun B provided the lyrical muscle (and still does today), while Pimp C was the more charismatic of the two (he too held his own on the mic and was slightly underrated behind the boards). Their awesome run prematurely came to an end with the accidental death of Pimp C on December 4, 2007. To this day, Bun B still carries on the UGK legacy and I highly respect him for that. Speaking of their awesome run, lets take a look at their largely stellar discography. Although they released two EPs prior to this album, which were "The Southern Way" and "Banned", "Too Hard To Swallow" is UGK's official debut, released in 1992. The "Banned" EP was also released in 1992, and apparently the songs on that release were deemed "too vulgar" for their debut. Be that as it may, this was a damn good way to introduce UGK, and they would only get better from here, especially on a lyrical level.

5 favorite songs- Something Good (Extended Version), Pocket Full of Stones, Short Texas, It's Too Hard To Swallow, & Feel Like I'm the One That's Doin Dope Not too many people knew about this album when it was released in 1994, especially with other Southern releases that year such as Scarface's "The Diary", Outkast's "Southernplayalisticadillacmuzik", and Big Mike's "Somethin Serious". Either way, you can listen to this album and tell they were still honing their style, not to mention their sound, which was very unique, in a good way that is. In short, no one sounded like UGK.

5 favorite songs- Pocket Full of Stones Pt. 2, Front, Back, & Side to Side, Protect & Serve, Feds in Town, & Underground UGK's best album, no question, and despite having no videos or official singles released from the album, it remains their most successful album, critically and commercially. It's probably one of the best albums that most never heard. "Murder", a hard hitting track produced by Pimp C & N.O. Joe, features an awesome, show stealing verse from Bun B, possibly his best verse ever. No one could ever say these guys can't rap, and that one song is one of the main reasons why. True classic. Coming five years after the classic "Ridin Dirty", this album here is their most underrated in my opinion. You can also attribute a few label issues (with Jive Records) as part of the constant delays with this album. It's not on the level of "Ridin Dirty", but it's still very good. And at this point, considering the recognition they received since being featured on Jay-Z's "Big Pimpin", they were a much bigger name in hip hop than they were previously. I feel they would still get bigger from there. Arriving almost 6 years after "Dirty Money", Pimp and Bun were at their absolute highest with this album, and it's my second favorite UGK album after "Ridin Dirty". It's also a double album, and more UGK is a good thing to me. "International Player's Anthem (I Choose You)" featuring another awesome duo in the form of Outkast was one of their biggest records, debuting on BET's 106 & Park in June 2007, plus winning "Video of the Year" at the 2008 BET Hip Hop Awards, as well as a nomination for a Grammy Award for Best Rap Performance by a Duo or Group. After all these years of hard work, they were finally getting the recognition they deserved. Unfortunately, Pimp C passed away in December 2007 before he and Bun could really enjoy the success. As for this album, it's excellent, and although most would say it would've been better as a single disc, I respectively disagree, as this album more than justifies it's length.

5 favorite songs on Disc 2- Still Ridin Dirty, Next Up, Real Women, Like That, & Living This Life This is the last studio album from UGK, as most of it was complete prior to Pimp C's death. I recall listening to this late 2009-early 2010 and intially not being too impressed with it. But I went ahead and bought it, and once I listened to it the second time, it instantly hit me as being another excellent album, and I'm still not sure what I missed the first time around. I also really like the fact that this was an actual studio album as opposed to just another posthumous release, which I hope we never see from UGK.

5 favorite songs- Used To Be, Still On The Grind, Steal Your Mind, Everybody Wanna Ball, & Da Game Been Good To Me

This is one stellar discography right here, and UGK's legacy lives on with it. Although they evolved with the ever changing hip hop world, they always managed to stick with the style and sound that they were known for, and that's what it's about. While still carrying on the UGK name, Bun B managed to have a solid solo career, having tight guest appearances on just about everything he touches, and not to mention three excellent solo albums ("Trill", "IITrill", and "Trill OG"). He will always been known as one half of the Underground Kingz, one of the best duos to emerge from the South.